Follow-up to Tired from Something Random

Ok, I really don’t know how this happened but I managed to delete one of my own entries. At this point in time not many explanations are forthcoming, as the deletion itself appears to have taken place years ago. Possible hypotheses are:

If memory serves me correctly (which it frequently doesn’t) It had this picture in it: 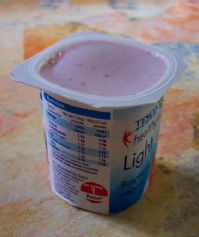 Unfortunately I can deduce no more from the comments except that I am a minor deity ex-brownie-guide professional yogurt opener who does it twice in one day. Rather specific if you ask me…

absolutely exausted in fact, so I'm gonna keep this post short so I can go nap – a most underrated activity.

Today felt like it was going to be a good day. The sun was shining, and maybe it was all the talk on the news about Nelson and boats et cetera, but I awoke as if with bracing sea air in my lungs and fortune and victory looming like mountains of muffins on the horizon.

Then onwards downstairs to breakfast.

I passed! Huzzah! I have to resit 3 modules but compared to the dreaded (and anticipated) resit without residence it's amazing. There I was thinking the day couldn't get better when this happens: 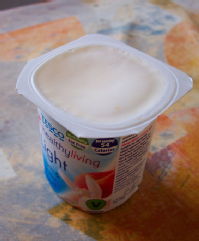 Now that is an achievement. See... I knew something good was going to happen today.

Is there anybody out there…

… who STILL hasn't got their results?!

or is it just me?

I know I've let myself down immensely and I've prepared my parents for the bad news but having to wait so long is really not doing my nerves any good. Bad nerves equals increase in tea consumption and then all the tannine gives me worse nerves. Plus all the heat, and then to top it all, being thrown into a constricting family environment. I think I'm going to break pretty soon.

I'm going to start naming the houseplants and carving mountains out of my mashed potato and talking about myself in the third person. I will refuse to eat unless my toes are pointing South-West and will demand that everyone wear mismatched socks in my presence on account of the strong symmetry messing with my 'karma'. Hell if I have enough time I may cultivate a split personality or two.

Of course it's not that far along yet. I'll start worrying when I start alternating every cup of tea with a hefty shot of Yeni-Raki.

But back to my original train of thought; how long are we expected to wait for results to arrive by mail? I left a stamped, self-addressed envelope with them and told them I wouldn't be there to collect it. Three working days have passed already, just what exactly are they waiting for?! Does it always take this long?

Just a little something

Why is it that the Novell GWMail system doesn't recognise the word 'blog' eh? It makes using the spell checker a right pain in the posterior, possibly because the one word it's so intent on correcting is usually the only one I've actually spelt correctly. Please keep your blobs, logs, blots and clogs to yourself Mr Novell, before I inform you where to shove them. Agh. It's late and I'm sleepy.

But yeah, if anyone gets an email about a biog, don't worry. I'm not about to start writing my life story down just yet. Not unless I want it filed next to "Spot the Dog Visits the Farm" In the easy readers section. Hehehe. What an idea though. The poor mites would never recover their mental health again, scarred from an early age.

And why does this thought make me laugh so much?!

Well, we just saw Sin city as a family, and apart from a few initial jumps from my mother the rest of my viewing was remarkably uneventful. No tantrums or interruptions – bliss. The plotline was really good, if a little disturbing, but it's the artistic influence and visuals that I found the most breathtaking. It was as if each frame of the film had started life being inked in by hand by an artist rather than from a camera. There wasn't a moment of film that wouldn't stand alone as a piece of art in its own right.

But enough from me. What did my brother have to say about the latest comic spawned masterpiece. His insightful and concise comment was:

Ok, well, maybe not exactly like in the movies. There was a marked lack of bikini clad beauties frolicking playfully in slow motion in jets of water but there was a lot of water and an awful lot of bubbles. With music, karaoke and icecream too.

I'll just apologise in advance for what i'm going to say, but I hate white cars. Silver or pearlescent are no problem, white is an issue. I don't know why I hate white cars so much, and I don't think some people are able to grasp the full extent of my loathing. Let's put it this way; my parents offered to buy me a car. It was white. I declined. Yeah, laugh away but that actually happened.

Another colour that sometimes gives me issues is green. Now green isn't really all too bad and can be very sexy indeed (e.g. racing green on a jaguar  yum) but it's not all that impressive on a Citroen AX.

Especially when that Citroen is supposed to be black.

That's the condition my poor baby was in this morning. Green. Because nobody else gives it good lovin when I'm out of town. It actually had ivy growing on the tyres  not through the hubcaps but on the rubber itself. Appalling. It's been moved from where it was before but my dad had been cutting the hedge around the car.

But anyway, after a lot of elbow grease it is finally shiny all over and clean enough to eat off of. (Seriously. I had to use fairy liquid because my dad has hidden the proper soap) It even got a polish. Yay so cute! 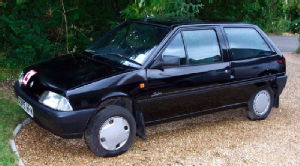 Isn't it a handsome devil? Well… yeah… maybe not. I can appreciate that it is sporting 3 styles of hubcap (one of which is invisible) and that I'd probably look better rubbed down in turtlewax than it does; but it was a few blooms away from being entered in the village fete as one of the horticultural exhibits, so it's a big transformation.

Ooo I'm so proud! :D So no mocking my baby, or I'll hunt down some of the local wild chavs and set them on you. Anyway, you're only jealous because I love my car more than I'll ever love you…
*I Love My Car (by Belle and Sebastian) plays in the background...

In other news I have 3 days in which to prepare my parents for the "Resit Without Residence" currently winging its way over here. This is not comfirmed, but my study buddy just got the same and we revised together so the probability of me actually passing is not looking good. As my house for next year is not PLU owned I'll still get to live there (if I don't find a replacement) so it's not all bad. And I won't have to attend lectures or labs.

I can't live at home. It would just be too painful. Not only would my parents live there too but my brother has just acquired a kazoo and has learnt the entire kazoo sketch from Bill Bailey's Bewilderness gigs – hand gestures and all. He will die soon.

There I was, listening to Placebo. The hidden track boasted a message received at 9:15 pm on thursday the 23rd. Hmmm... "it's thursday today." quoth I. Then turning to look I noticed it was actually the 23rd too. Woo the freakyness!

But no message for me.

*collapses into a puddle of messageless, unloved * damnit, I can't even blame it on my age anymore :s

Have a break, have a Mia

Click link. Type name. Generate your own personalised advertising slogan. I found this on the blog of a girl with the same name as mine (oh the outrage) But luckily that meant someone else went through all the pain of doing the research for me. Muahahahaha... yay. Unfortunately it is most addictive and also strangely spirit&ego boosting. As they say, "With A Name Like Mia, It Has To Be Good!"

Mia Is What The World Was Waiting For.
Damn straight!
Now I want the t-shirt…

Having had no access to a television in the past year I had completely forgotten the high quality programs being broadcast for my viewing pleasure. How did I manage without them? I turned it on today and the first program to accost my eyes was none other than:

Ahahahahahahahahhahahahahaa. I love daytime TV, If only for the immense satisfaction it gives me to switch it off within seconds. Just the title cheered me up no end and it didn't get the chance to corrode my brain. Brilliant.

I wish my results would just hurry up and arrive too. The waiting is starting to eat away at me, I'd rather just know either way so that if it's bad enough I'll have more time to make the necessary arrangements to leave the country…

Having been on a 30 minute cross-country cycle ride I am feeling terribly healthy and superior from endorphin release. Mwahaha. and I read The Picture of Dorian Gray by Oscar Wilde, and watched my first ever tennis match (which Henmann actually won) and spoke to lots of people on msn and cooked roast chicken for four. Oh, and saw a laughably poor teen horror movie with my brother. All in one day. Plus I am blogging. On the down side I must have swallowed a multitude of gnats thus explaining why, a little later, a spider jumped on my face. Dis-gus-ting i think you'll agree.

Anyway, this post is just to alert people to two things. The first being Project Gutenburg - an online catalogue of thousands of e-bookswhich are all free to download. It's really just the old classics rather than modern titles, but still worth a look. And the second comes from that site. It's a book I'd heard of but never seen called The Devil's Dictionary . It's essentially a dictionary of cynically accurate descriptions. For example:

For more of that click the link and download it. It's almost along the same lines as The Meaning Of Liff (another thoroughly amusing book and, now that I check, co-written by Douglas Adams too) that, rather like a dictionary provides words with meanings, provides meanings with words. Some of my favourites are:

Well actually I'm tired. but this unrelenting heat won't let me sleep.. Gah. And just to make it better my body has decided that hayfever is in this season, dahling, so for the first time in my life I am shunning the great sunny outdoors. *sniffle* Why couldn't my body just decide it suddenly wanted a tan or a flat tummy or firmer buttocks. Why a goddamn allergy eh?!

No fair. No fair at all…