Metrosexual:
The typical metrosexual is a young man with money to spend, living in or within easy reach of a metropolis  because that's where all the best shops, clubs, gyms and hairdressers are. He might be officially gay, straight or bisexual, but this is utterly immaterial because he has clearly taken himself as his own love object and pleasure as his sexual preference.
However the "Metro" in Metropolis comes the Greek word Meter, meaning mother. Hence, as a matter of semantics, "Metrosexual" actually means motherfucker.

It's amazing the information that a little research can trawl up.

How many did you tick? Any at all? Would you stand by them on pain of death?

During the Pride Awareness Week last week, I was fortunate enough to be one of the few people who attended the discussion given by Kath Lambert on the topic of "Sexism and Homophobia". My summary, as best as I can remember it…

The main focus was on the 'missing link' between to two prejudices. Or in other words how an anti-female and anti-homosexual bias arises from an underlying pro-heterosexual prejudice. Heterosexuality is seen as the normal state of being, everything else is seen as deviant and, crucially, as wrong. When the truth is that it's just different, and no more pertainant to how an individual should be treated than their skin colour or eye colour.

In all truth heterosexuality is one of society's biggest memes. Think about it. I wouldn't go so far as to describe it as a cultural virus, but simply through repetition it becomes the accepted norm rather than something that should be questioned and interpreted on ones own personal grounds just as with so many other things. For something that plays such a huge role in your life it's surprising how sexuality is, on the whole, ignored by the masses.

The rights of the individual to express their own personal taste is played on by every branch of modern media and society. From perfumes to music videos, from the colour of the nappies you are potty-trained in the emphasis is on a heterosexual way of life. Why? Because that is what's seen as normal. Imagine the uproar if the girl in the "fruity yoplait" advert kissed another girl, yet kissing a boy is viewed a cute. Since when do small children feel attraction to anyone regardless of sex? The rules of attraction are already laid out for them before they even know what it is and woe betide those "perverse" individuals that don't adhere to society's self-fulfilling prophesy

When it comes to ethnic origin the 2001 UK National Census gave the options of White British/White Irish/Other White/Mixed/Indian/Pakistani/Bangladeshi/Other Asian/Black Caribbean/Black African/Other Black/Chinese/Other Ethnic Group. These are people living in England yet the freedom is there to express not "who you are because of your geographical location" but "who you feel you are and who you identify with".

I am white with blonde hair and blue eyes. I was born in Islington and raised in Hounslow and then near Staines. I've lived in the UK all my life, been through the British schooling system, Am currently attending a British University and yet would never tick the "White British" box. My mother is Spanish, as are the majority of my living relatives and that's a huge part of how I identify myself. I'm not willing to discard it just so I can fit into the box they provide.

But when it comes to the designated standards "male attracted to females" and "female attracted to males" there is this reluctance to even consider the possibility of an "Other" category even though sexuality is no more phenotypically apparant than your favourite breakfast cereal.

HETERO/SEXISM
The assumption that heterosexuality is the norm and should therefore be priviledged and promoted in society.

But what does it mean? Sexism and homophobia are active prejudices. They essentially state that:

Heterosexism combines the two, yet is somewhat passive. Everyone is heterosexist at some point or another, It's not easy to spot and it's not something you tend to think about. Someone shared how they always ask their youger cousin(male) if they have a girlfriend, even though they themselves are gay. A friend of mine recently explained how things were getting tricky because his best mates girlfriend had fallen for him; I asumed the best mate was male – as it turns out she wasn't… this is also known more specifically as heterocentrism.

Maybe a better way to define woulf be on a scale rather than just the two extremes. Some would argue that the same should apply to gender. But Apart from TFS males and those with similar genetic/developmental issues I think that phenotypical gender is on the whole quite descrete; what does change is what gender we identify with the most, however this itself brings with it heterosexist beliefs as identifying with a gender requires you to first define that gender.

Think about it though? where would you define yourself if given the freedom to stray from the set boundaries and to tick outside the box. It's so ingrained I doubt many people even think of it past the "well I'm not gay" knee-jerk reaction. I am intrigued. If people could leave their "time" (eg 4:30) and gender as anonymous comments It would be interesting to see the results

"Heterosexuality is not normal, it's just common" – Derek Jamon

I'm only a biochemist so there's probably a lot of basic stuff that I've missed out or got wrong, that would appear in sociology and psychology degrees. Enlighten the world via the comments section. 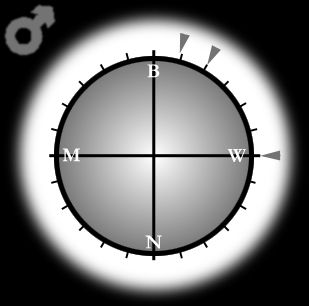