The hazards of raising a young blog.

Follow-up to Virgin Blogs, no, seriously, what is the point? from Something Random

Or maybe "Be Controversial – Dare to Blog"

Mummy, where do baby blogs come from?
Well, when a blogger and their computer love each other very much…

Yes, cradled and protected since conception you watch them grow day by day slowly covering a wider breadth of subjects than those encountered in your everyday life. Then suddenly they begin to actually communicate back with you! And though you secretly cant wait, you still fear the day they become fully fledged, well rounded adult blogs. For once in the wide open blogosphere they become easy targets for criticism as well as praise, so its vital that from a young age you feel they can represent you accurately and make you proud.

Freedom of speech is all good and well as long as you are able to convey exactly what it was you wanted to say, But imagine the horror felt when you come to collect your little blogette at the end of the day, and the teacher gestures you over to them for a little talk.

She said what?! Infront of the whole class?! Surely thares been some kind of a misunderstanding, a misinterpretation? Ive never maintained any beliefs of that kind. Good grief, yes Ill make sure I say something as soon as I get her signed in. But yes, thank you for telling me…

So yes, maybe there are a few things that need to be cleared up before any more 3am logic is unleashed on the world and I start to irritate people.

1. I think that empty blogs are a waste.

2. I know starting a blog is a pretty daunting prospect for newcomers.

Its almost impossible to leap in with all eight pistons pumping, and its ok not to. Try just one piston, or wait until youve found the right kind of hill to give you a bit of a rolling start. Even a bicycle will do. Anyone attempting to start their blog on a tricycle however will automatically earn my respect especially if pictures are posted. Unicycles are even better.

But seriously anyone who has owned a blog for, say, 3 months or more and left it uncultivated through fear of criticism has serious issues and ought to talk to someone with the appropriate qualifications to counsel them. Join forces with a friend as a joint administrator and do it that way maybe.

3. I accept this is always going to be an issue. It doesnt mean it stops annoying me like an unscratchable itch.

With 1075 empty accounts at the current count I guess some changes are in order;

Wow I guess thats quite a persuasive manifesto, well, at least from my point of view it is.
1. do nothing
2. promote blogs
3. drink tea and eat biscuits
I think youll all find I can keep to that with ease. Its tough work eating biscuits but someones got to do it.

Yes, I still wholeheartedly agree with this statement. And mayonnaise is a pretty bad idea too while were on the subject; unless, that is, you have an IQ of 46 and are what some might call mentally retarded.

5. Now, on being psychologically Fascist-minded...

Possibly the most worrying comment I never expected to receive. Im not, and I don't mean to offend. You, yeah, you with the torch and pitchfork  please let me explain.

…As a rule, fascist governments are dominated by a dictator, who usually possesses a magnetic personality, wears a showy uniform, and rallies his followers by mass parades; appeals to strident nationalism; and promotes suspicion or hatred of both foreigners and impure people within his own nation… source

Just to double check I did the political compass and it's ok folks, I came up somewhere between Gandhi and Nelson Mandela – Phew! 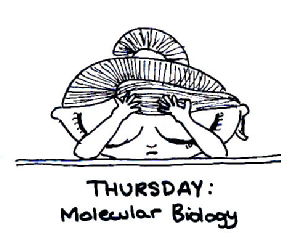 How scary. My blog is already a troublesome tot and I wasnt even trying to be controversial. Is it even possible to offend nobody at all? Unless maybe I blog the build-up of dust on the shelf next to my computer  and even then Im insulting peoples intelligence. Lets face it something thats inoffensive to everybody is pleasing to nobody. Oh Jeezie-Chreezie Ive just done it again! I can hear the mob beating down my door already. Aargh! And I blasphemed too!

So maybe the only way for me to be completely inoffensive is to blog nothing at all and let my blog become the thing I hate the most. Maybe thats why a third of warwick blogs are empty, its the only way to remain perfectly politically correct and incite no reaction whatsoever. Was I somehow mistaken in my judgements, and is this, the silent majority the cream of the blog crop?

Maybe Im taking a huge risk but Im going to chose the path less travelled, the overgrown tricky one that apparently 60% of us fear to tread, Im going to blog. Im not about to incite a revolution or try to reinstate the death penalty or go out to egg your residences. I am going to draw, I am going to praise stuff I like and bitch about stuff I dont, simply because I want to and I feel like it and I can.

EDIT: whoa, this post didn't look as long in my mind...

Virgin Blogs, no, seriously, what is the point?

Outraged, that's how I feel. Outraged and sad inside…

You know that feeling, i've been blogging for only a couple of weeks now and it already annoys me.

That most useless of links, the waste of valuble seconds of your life while what promises to be an insightful snippet of the warwick blogosphere actually reveals itself as a hollow pit of nothing. The more blog territory I explore the more I encounter it and the sadder I feel. Who are these people? Do they only wish to let us know they exist in the most passively annoying way ever? If not what's their motive?

"Oooh I have something interesting to say, I'll blog it"
*creates blog*
"Oh wait, actually it's not that interesting. Nevermind."

And so the blog universe becomes littered with big chunks of blog dark matter, that just consume space whilst simultaneously offering no visually appreciable attributes to the world. Some may argue that dark matter is essential to account for the huge mass of the universe as we know it - these people are stretching the metaphor too far, ignore them.

The more astute of you will have noticed the existance of the "Virgin Blogs SHAME ON YOU ALL!" list under the "favourite blogs" folder. I wouldn't bother clicking (unless you want to know who these people are), Because these are the most useless blogs in the system. The only way for them to escape the hall of shame is to blog (or close the account - but that's not what i want to promote) . Because big is better, big is beautiful. More active blogs = more active bloggers. More active bloggers are able to give a better more rounded opinion of events.

Just one example of this that I noticed the other day was concerning the law ball. Now, I went and it was ok but I did wonder what other people thought. Searching the blogs ony one entry out of 3002 blogs is about the 05 ball (or at least this was the case when i made this entry). I realise this example is not perfect and essentially hypocritical as i myself did not blog about the ball (I have my reasons) but for an event that big to go by almost completely unremarked upon by 3001 people is quite scary.

So that's my logic.

If you've gone far enough to open a blog, why not fill it? Surely every individual has something to offer? humour, insight, opinion? Good grief, if this guy can fill a blog anyone can!

And my plan of action?

And what of the current blogging community?

Most importantly remember that these people are still human and have feelings and thoughts too. Even if they themselves deem them too mediocre to unleash on the world.

As always, thoughts and comments are appreciated,