The City of Peace and Reconciliation.

I had to get a replacement bus from Northampton to get back from Bedford at the weekend because of engineering works.

Bus went through Rugby where I saw an angling supply shop called (wait for it) Rugby Tackle. Nice to have a logical punning name.

I also noticed that Coventry has Welcome to Coventry signs coming into the city which say 'Welcome to Coventry - Home of Coventry University' this is useful as sometimes that sort of thing can be confusing, and it is also a nice big fuck you to Warwick Uni.

Best bit – when Herzog explains he jumped into a cactus after one of the little people from Even Dwarfs Started Small got run over and set on fire and Herzog wanted to show he had some understanding of the problems little people faced in the world.

Some how what should be one of the most ridiculous things ever manages to be quite profound.

Continuing the theme of 80's action stars and international presidental lookalikes, it appears the president of Ecuador, who claims to called Rafael Correa, is actualy Jan Michael Vincent off of Air Wolf. To be honest, they dont look that similar.

Rafael Correa does look exactly like Kyle Chandler off of Friday Night Lights: Check out Friday Night Lights. Its good. The President of Ecuador is particularly good as the coach. I am teh Funny.

Hello… My Name is Bjork

Bjork seems mental. But then i dont think i would come off much more sane if someone stuck a camera in my face and asked me to explain myself. In a language which is not my first. If i was in a multicolour feather duster suit. And wearing make up which made me look like the exorcist demon on acid.

It's hard to grow up in this industry, and some people work out how to do it quicker than others. But yeah, it probably has made me a stronger person - I have a very good bullshitometer."

-  You're going out with Johnny Borrell from Razorlight.

Apparently at the Spiderman premiere she said this:

"I was brought up on Guns 'N Roses, the Les Miserables soundtrack and anything my mother listened to. But it's much harder to find great music these days."

I don't know how to describe the levels of irony involved in a person going out with Johnny Borrell from Razorlight, saying those those words, and then saying they have a good bullshitometer.

Dunst saying stuff has come from nowhere to challenge Ben Elton's Get a Grip in the unintentionally hilarious brilliance stakes.

- My Dog has no nose and no legs. So it is forced to lie in a pool of its own filth. Unable to crawl away all it can do is lie wimpering, with fur matted by its own dirt and the pus running from open sores.

- How does its smell?

I like marching bands. There is a great bit Dave Chappelle’s Block party where the Marching Band plays Jesus Walks. This is better:

This is an awesome picture
and the story suggests crocodiles are FREAKING BULLETPROOF!!!. Can they get any more awesome?

It bit his arm off, so points to the crocodile, but then we reattached it, so which species wins? i suppose it is still in a zoo…


Is the new Bjork Track.
I also like this picture: 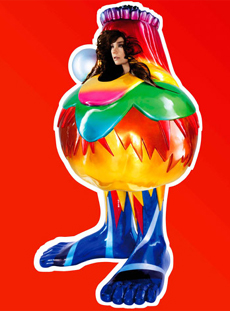 And These People’s clothes changing magic: (This clip is so awesome it gets over the major handicap of featuring pierce morgans’s (he doesn’t deserve his name spelled right) face.)

He is the business. This is the central set piece from The Warrior King. It is more nuts than Ong Bak. S’good. He kicks the light out of a street light. And fights an army of extreme sports people, and knees people through walls.

First Against the Wall

I quite like lists, because I am a nerdy middle class white male.

Here is the list of people I will always hate, regardless of what they may or may not do in the future. I was gonna say this was the list of the only people I will happily use a very rude word about, but that seemed childish. I wont explain each choice, the reasons should be fairly obvious, though I can give a justificatory diatribe on each of them if pressed (it wont take much pressing).