Armstrong's Poetic Blunder on the Moon: from the BBC

Neil Armstrong missed out an "a" and did not say "one small step for a man" when he set foot on the Moon in 1969, a linguistic analysis has confirmed.

The researchers show for the first time that he intended to say "a man" and that the "a" may have been lost because he was under pressure.

They say that although the phrase was not strictly correct, it was poetic.

And in its rhythm and the symmetry of its delivery, it perfectly captured the mood of an epic moment in history.

There is also new evidence that his inspirational first words were spoken completely spontaneously - rather than being pre-scripted for him by Nasa or by the White House.

In the recording of Neil Armstrong's iconic phrase he says: "One small step for man. One giant leap for mankind". However, "man" and "mankind" mean much the same thing in this context.

But on returning to Earth, he explained that he thought he had said "one small step for a man".

Explanations offered for the discrepancy are that perhaps transmission static wiped out the "a" or that Commander Armstrong's Ohio accent meant that his "a's" were spoken softly.

In 2006, an analysis by an Australian entrepreneur added credence to these explanations - as it found there was a gap for the "a". However, subsequent analyses disputed this conclusion.

To settle the argument, Dr Chris Riley, author of the new Haynes book Apollo 11, An Owner's Manual, and forensic linguist John Olsson carried out the most detailed analysis yet of Neil Armstrong's speech patterns.

They are presenting the research at the Cheltenham Science Festival this week.

"For me that phrase is of great significance," said Dr Riley.

"It has been an important part of my life and those words sum up much of the optimism of the later part of the 20th Century."

Using archive material of Neil Armstrong speaking, recorded throughout and after the mission, Riley and Olsson also studied the best recordings of the Apollo 11 mission audio ever released by Nasa.

They have been taken from the original magnetic tape recordings made at Johnson Space Center, Houston, which have recently been re-digitised to make uncompressed, higher-fidelity audio recordings.

These are discernibly clearer than earlier, more heavily compressed recordings used by the Australian investigation.

These clearer recordings indicate that there was not room for an "a". A voice print spectrograph clearly shows the "r" in "for" and "m" in "man" running into each other.

The researchers say the Australian analysis may not have picked up the fact that Armstrong drawled the word "for" so that it sounded like "ferr" and mistook the softly spoken "r's" for a gap.

"It's perfectly clear that there was absolutely no room for the word 'a'," Mr Olsson explained. 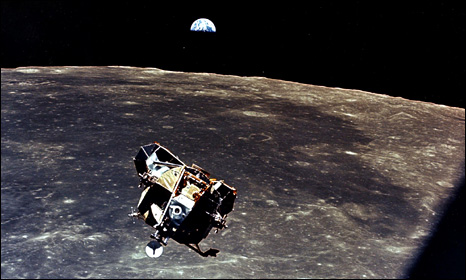 Riley and Olsson also concluded that Commander Armstrong and his family members do pronounce the word "a" in a discernible way.

And based on broadcasts from Neil Armstrong and Buzz Aldrin from the surface of the Moon, it is clear that the word "a" was easily transmitted to Earth without being obliterated.

But their analysis of the intonation of the phrase strongly suggests Commander Armstrong had intended to say "a man". There is a rising pitch in the word "man" and a falling pitch when he says "mankind".

According to Mr Olsson: "This indicates that he’s doing what we all do in our speech, he was contrasting using speech - indicating that he knows the difference between man and mankind and that he meant man as in 'a man' not 'humanity'."

There has also been speculation that Neil Armstrong was reading from a pre-prepared script penned for him by another party. According to Mr Olsson, that is not borne out by Armstrong's body language and speech patterns.

"When you look at the pictures, you see that he's moving as he is speaking. He says his first word 'that's' at the moment he puts his foot on the ground. When he says 'one giant leap for mankind', he moves his body," he said.

"As well as this, there is no linking conjunction such as 'and' or 'but' between the two parts of the sentence. So it's for all those reasons that we think this is a completely spontaneous speech."

It may well have been that spontaneity that led to Armstrong's slight mistake. But according to Mr Olsson - Armstrong may have subconsciously drawn from his poetic instincts to utter a phrase that, far from being incorrect - was perfect for the moment.

"When you look at the whole expression there's a symmetry about this. If you put the word 'a' in, it would totally alter the poetic balance of the expression," he explained.

This makes Dr Riley feel that the research has made a positive contribution to the story of the Apollo mission.

"I’m pleased we've been able to contribute in this way and have hopefully drawn a line under the whole thing as a celebration of Neil and everyone involved with Apollo, rather than this constant little niggling criticism," he said.

From The Indie: Now It's Bullying

Joan Smith: Padel has been bullied for her frank ambition

Blimey, have you noticed how quickly people get on their high horse these days? A week ago, the great and the good leapt on their steeds and galloped after Ruth Padel, newly elected Oxford professor of poetry, forcing her to stand down after only nine days in the post.

Padel's offence was not admitting that she had alerted two journalists to the fact that her main rival, the poet Derek Walcott, had been accused of sexual harassment on a couple of occasions. Earlier this month, Walcott withdrew as a candidate, claiming he was the victim of a smear campaign.

It was silly of Padel to hide the fact that she'd sent the emails, but hardly a hanging offence. It isn't as if the accusations were new or had never been published; they've appeared in a book and Walcott settled out of court with a former student. But last weekend, some of Padel's erstwhile supporters had a fit of high-mindedness and started harrumphing about how she'd let them down. Padel duly resigned, admitting to "a grave error of judgement" but denying that she was responsible for a wider campaign against Walcott.

Does any of it matter? I don't suppose there are huge numbers of people who really care who holds the Oxford professorship of poetry or who could name Padel's predecessor. I certainly don't think it's the subject of heated discussions in pubs, where people are far more likely to be fulminating about MPs' expenses. But I do think there are parallels between the two controversies, and one of them is a public mood which is puritanical and uniquely unforgiving.

I know Padel slightly and invited her to join the PEN Writers in Prison Committee when I chaired it. I always found her friendly, hard-working and decent, and I'm dismayed at the way she's been vilified in the past few days.

Padel has done more than most to popularise poetry in this country, not least in a weekly column she wrote for this newspaper, and no one doubts that she would have done a brilliant job as poetry professor. She admitted she had done something wrong, had the guts to say so at a press conference and went on to appear in public at one of the country's biggest literary festivals.

In the present mood, none of that is enough. It used to be a common complaint that no one in public life ever apologises; now people spend their time doing little else, but it is only a stage in an apparently unstoppable cycle of blame, shame and humiliation.

Padel's supporters could have accepted her apology and assumed that she had learnt from a bruising experience; they might even have acknowledged, silently, that the academic world has always been characterised by the most deadly rivalries.

Ambition is not exactly unknown in Oxford and I suspect that Padel's biggest mistake was to let hers show. On the whole, men are smarter about that; I've lost count of how many times I've heard a man who was positively gagging for a big job protest that it was a burden he had decided to accept only reluctantly. I don't think it's a coincidence that this has happened to a woman, and the spectacle of the boys' club closing ranks against her isn't exactly edifying.

It's a measure of the times we live in that even the election of a rather obscure (to most of us) professor of poetry can be parlayed into a media storm. It may be that most poets would like to go back to being the unacknowledged legislators of the world, but in such a febrile atmosphere I don't hold out much hope.