All 1 entries tagged Audiences And Instituions

It is difficult to avoid a feeling of Schadenfreude as one looks at the sales figures of the Apple iPhone since its UK release and faiure to reach the projected sales forecasts of 200,000. One might think that selling 190,000 was pretty good going as they cost about £280 quids and you have to take out not a 12 month but an 18 month contract at £35 per month. Well the latter fee used to be not so bad but now prices have dropped considerably. The fact of the matter is that Jobs launched the iPhone into the gathering storm of an economic recession and the reality is that the aspirants buying into designer this that and the other are going to suddenly think twice about these expenses as other things suddenly become a priority.

Jobs has already had to drop the price of the iPhone in the USA quite soon after its launch and today's FT reports that some analysts are expecting the same to happen in the UK:

Some analysts, who had regarded the original 200,000 prediction as a conservative estimate, said Apple might have to cut the price in the UK if it wanted to maintain sales momentum. The iPhone’s headline price is £269, but customers must also take out an 18-month contract starting at £35 a month, meaning a minimum outlay of £899. (My emphasis) 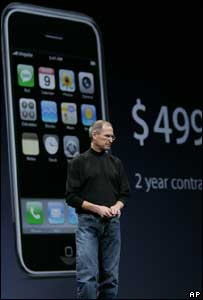 Look out for some appearing in TK Maxx if the recession really bites!

In the US, 10 weeks after its launch, Apple cut the iPhone’s headline price from $599 to $399, which angered customers who had bought the handset. Steve Jobs, Apple’s chief executive, subsequently apologised. On Tuesday, he said 4m iPhones had been sold worldwide. (ibid)

As the FT points out Apple is facing the fact that mobile operators in both the UK and the US subsidies the handsets and claw back the costs through the subscriptions or relatively highly priced pay as you go calls.

If you thought touchscreen is where it is at then check this out coming fairly soon near you (maybe):

Nokia has also developed an interface method that doesn’t even require you to touch the screen where the phone reacts to hand gestures made in three dimensional space and can even track the movement of your hand. (From Pocket Picks)

In the meantime you will just have to suffer with these Nokias the excitingly named N81 and N82: The box says they do this lot which is a pretty good scorer on the convergence front:

The 140g N81 is an 8GB music phone with wi-fi, HDSPA, quad-band, 2MP camera, Bluetooth stereo, 3.5mm headphone jack, 16 million colour 240 x 320 pixel screen and dedicated music and gaming keys. Word from the Guru is that this will be one of the N-Gage Gaming Platform launch handsets. The 120g N82 takes all that and adds TV-out, GPS functionality, FM radio, a microSD slot, and raises the game with an N95-matching five-megapixel camera then bungs a xenon flash on top of all that. (ibid)

Customer Choice: The Nokia Nobrainer or the iPod Nano?

Well 8 gb is as much as an iPod Nano with a few other gizmos thrown in - like making a phone call.  Unlike the state of the market when Apple stormed the MP3 downloading market with the iPod the mobile phones is a sophisticated and hig hly competitive market with a lot of very experienced operators. It appears that Nokia's fight back for the premium phone market is going to be based around a very new model of consumption which involves free music downloading from a choice of around 2 million 'tunes'. You will be able to keep the music even if you drop the contract. This might not only hit iPhone below the waterline it could significantly effect iTunes itself. A quick trip to the Nokia site I couldn't find any Nokia phones which supported iTunes.

Phone for Internet Junkies from 2007 Phone for the YouTubers

Sounds like this Motorola has plenty of appeal for the budding film director promising instant uploading to YouTube: ...the ‘mobile film studio’ aspect comes from the phone having the ability to let you instantly upload photos and videos to YouTube, Google, Yahoo and Shozu. So it’s not quite a proper ‘film studio’ but its still an appealing new handset.

That might mean Apple have to go back to their origins and try and flog computers, the trouble is Microsoft seem to have pretty much caught up.... (aside: well got to say something controversial it is a blog after all).