Impressions of the iPhone

Follow-up to BlackBerry, iPhone or Sony UX1 from Kinoeye

Impressions of the iPhone

One born every minute? I'm going to run home and ring people just to say 'Guess what, I've got an iPhone, bye!'

one of the most-hyped technology products in history

Well the iPhone is well and truly launched. This posting is now collecting impressions and comments from the press, blogs etc. Will it live up to the hype is the big question. As stated elsewhere on the blog the real issue for me is how well this gadget is going to work with iTunes and where is iTunes going to go? I think this will be the secret of its long-term success (or not). I'm guessing that Apple are making a play for the mobile moving impage market which will become increasingly important over the next few years. In Britain the big year will 2012! Why? UK goes fully digital & the Olympics are being held in London. Who wsaid that concidences don't exist? (A: Arthur Koestler).

To prove my point here is the comment of a journalist from Business Week, Arik Hesseldahl:

Just installed iTunes and looked in the preferences tab and noticed a new feature specific to the iPhone: Looks like it will back up data from the phone, which is a feature that cell phones in general have been needing for a long....

The Role of iTunes

As a kind correspondent in the comments box has pointed out the facility to back up is available on some phones. A contributor to the Business Week blog above has also noted this. It is the link into iTunes which is important. In this sense iTunes is just bundling already available technologies.  Intantaneous subscriptions to podcasts & vodcasts as well as everything else which iTunes has to offer is a powerful marketing tool. iTunes is already a proven and popular technology which other phone companes simply do not have.

Whilst Apple is nominally ahead of the game Nokia, Sony etc will not be far behind but as with the synergies produced by iTunes and iPods supporting archiving and downloading software is going to be crucial. This is where Sony MP3 players have lost out. Functionality combined with becoming a style icon is the game.

An interesting issue is whther iTunes is going to make deals with video content providers which could effectively lock consumers into a sytem.  With music the content providers and therefore iTunes had a problem. Music was easy to download in 'pirate' versions and at the end of the day anybody could go to a record shop and get a Digital Rights Management (DRM) free CD. This isn't going to be the same with video content. This huge commercial game seems to be less about phone sales than grabbing a good share of content provision via an online database like iTunes. The chic technology provides a bigger screen and an automatic widescreen facility. Whilst the technology geeks are watching out for what the next versions of the iPhone has in store look out for signs of business dealings with content providers. This is what will drive iPhone sales over the longer term once the gadgetry spree has run its course. If Apple gets this right its share price really will start to become stratospheric and with good reason. A quick look at the Footsie 500 companies will quickly show that the software providers are making more profits on less turnover than hardware providers such as Sony.

I think Apple are likely to be outstandingly successful with this combination. They have learned a lot through the iPod / iTunes combination and this is likely to pale into insignificance once the video infrastructure catches up

Thus far Apple has the edge. There are also some video links to current iPhone "rivals", which aren't really on the link below:

Some people had been queuing for days outside Apple and AT&T stores across the US to ensure they got hold of one of the devices. (The BBC provide a link to an iPhone demonstration from this page).

Can your phone do this? 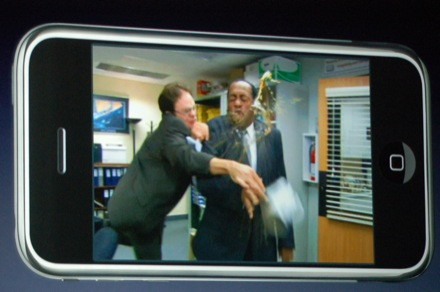 Whatever else Apple appeared to get off to a good sales launch with  over half a million phones sold in its first weekend. (Thursday, 5 July 2007)  That has to be impressive by anybody's standards.  According to this BBC report 02 is the phone company which is getting the contract to provide iPhones when they launch in the UK in this autumn (2007). However MacWorld of 20th July has discovered an argument that Vodaphone may well be the company which has iPhones if the work of a clever hacker is anything to go by.

The price is expected to be in the region of £300 initially.  These sales need to be put into the perspective of the sales of other mobile handset makers. some are arguing that even sales of 10 million is still 'small beer' compared to the Nokias of this world as a BBC analysis argued in January 07 when Jobs announced the gadget:

Mr Jobs predicts Apple will be able to sell in the region of 10 million iPhones in 2008, when the device will be available not just in the US and Europe, but also in the fast-growing Asian market.

While sales on that scale would be good for Apple, they would still be relatively small beer when compared with total annual global mobile sales.

US handset maker Motorola revealed last year that it had sold more than 50 million of its Razr branded mobile phones since its market debut.

8:05 AM EDT, June 7th, 2007 comments on the predictions made by a leading analyst called Gene Munster about the sales potential for the iPhone :

Jaffray analyst Gene Munster is predicting that will signal the beginning of a skyrocketing climb leading to 45 million units sold in 2009. For calendar year 2007, he expects Apple will sell 3.2 million units, and 12.4 million in 2008.

Looking at the 45 million unit prediction for calendar year 2009, Mr. Munster commented "While this may seem like a bold prediction, we believe a number in this area is not as far of a reach as some may think. Specifically, to reach iPhone units of 45 million, we believe the product will have 7.0 percent hand set market share in North America and 2.8 percent handset market share in the rest of the world."

Whilst one Internet wag has noted that 45 million phones in one year is a significant amount of the world's population the key point is that Jobs has given an estimate of 10 million sales by that time. Obviously any sales in excess of this will be a feather in the cap of Apple.

The handset has also been criticised because it does not use the 3G network, does not support instant messaging or voice-activated dialling and does not let people choose ringtones beyond the 25 pre-installed on it.

Some critics have said that the iPhone's touch screen makes texting hard work but most agree that the design is likely to filter down to other mobiles.

The "Ouch" BBC Disability Magazine has some intersting individual postings such as the one below. The posting has included some choice quotes from Apple geeks which are blunt to say the least.

I'm a bit of an Apple geek on the quiet, so when their sleek and shiny new iPhone was announced last week to whoops of delight, I'm afraid that I rather joined in the chorus of "I want one! Gimme one!" I'm ashamed to say that almost the last thing on my mind was how accessible it might be to blind and visually impaired users, considering that its operation relies almost entirely on touch-screen technology.

I must admit that a phone which is marketing itself on its visual capabilities primarily the playback of larger size video is by its very essence unlikely to be very useful to blind or partially sighted people. Clearly phones which are primarily for voice communications and interface via more haptic or aural methods are going to be more suitable. It does seem a little pointless attacking Apple for designing a piece of technology which is about visual communications. The issue is surely are there a good range of alternative technologies available for bling and partially sighted people. Voice recognition and being able to connect with soembody using voice only instructions seems the way to go. I'm sure this would be more useful for most people as well as for visually impaired people than the iPhone.

so far no manufacturer has made a phone that you can completey customize (font size, colour scheme etc) like you can with say Mac OS or Windows.

One comment on the entry seems to make the point well. Interfacing which can be accessed flexibly by a wide range of users is going to be be better. I imagine this would appeal to a wide range of people. Nevertheless touch technology as an interfacing system for large audiences is in its infancy. I suspect mobile interfacing still has a long way to go. On this basis Apple's technology is to be welcomed even if it is still limited.

Sales at launch of iPhone

Apple sold up to 525,000 iPhones at its stores and AT&T's in the first weekend since the device launched on Friday, the Los Angeles Times has reported.

First impressions of the iPhone