David Lean filming the funfair sequence of This Happy Breed

David Lean was the son of Quaker parents and as such the cinema was forbidden territory on religious grounds. Lean disobeyed his parents and saw the Hound of the Baskervilles (1921) and was instantly won over to cinema. Lean entered the film business in 1927. Throughout his career David Lean was closely involved with editing

Lean concentrated on editing whilst closely observing how directors worked, he nevertheless laregly avoided making the ‘quota quickies’ as he was concerned that these wouldn't help his career. He quickly gained the reputation for being the best editor in the country working on Pygmalion (1938), and Powell and Pressburger’s 49th Parallel (1941). Lean then worked with Noel Coward on In Which We Serve (1942). Lean then made Blithe Spirit (1945) a Coward play which Coward felt he had not made the best of. Brief Encounter (1945) was based upon a one act play by Coward. It had a disastrous preview which had the audience in hysterics nevertheless the film has now become a classic.It can however be seen as a very conservative film as its basic message is part of an overall post-war message that women should get back to their prewar positions in society following the much freer moral milieu of wartime Britian especially in London and the big cities.

Kevin Brownlow argues that Lean’s two Dickens adaptations of Great Expectations (1946) and Oliver Twist (1948) are still regarded as the finest among all British films. Unsurprisingly American critics in particular complained that the representation of Fagin was deeply anti-semitic and was similar to much Nazi anti-pre-war propaganda. They were so effective that the filkm wasn't released immediately and had to be edited before its eventual release. Lean's defence was that the looks of the character were modelled on the original illustrations for the text by Cruickshank and that furthermore as a Quaker he didn't have any notion of what anti-semitism was. This is a little hard to swallow from somebody who had an astute and acute visual awareness. There can have been few adults in 1948 who were unaware of the realities of the 'Holocaust' and at best this representation could be considered as insensitive. Who is to say that Cruickshank wasn't anti-Semitic in any case? 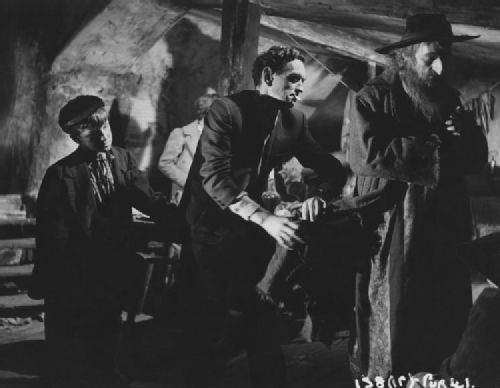 Passionate Friends (1948) followed. Madelaine (1949) by comparison fared rather les well being seen by many as cold tributes to his third wife. In the 1950s he progressed through The Sound Barrier (1952), to Bridge Over the River Kwai (1957 UK) gaining several Oscars including best picture and best director. In 1962 he made Lawrence of Arabia which also received many awards and is considered by many as a masterpiece. This was followed in 1965 by Dr. Zhivago which received public support through the box office despite many reservations from critics. Ryan’s Daughter (1970) was seen as a very old fashioned picture and was badly received by critics although it can now be seen as interesting in its representation of Irish resistance to British rule. In 1984 He made Passage to India which gained critical plaudits and academy recognition. He died just before shooting on Nostromo was about to start. In the August editionof sight & Sound Nick James argues that it was Lean that was the grandfather of the British 'Heritage Film' making specific reference to Passage to India (1984). Arguably Lean's contributions to heritage cinema are embedded in most of his cinematic output. Blithe Spirit, Brief Encounter, seem to be infused with a sense of nostalgia a sense of a mythical golden age which was somehow lost. Most of them show a sense of anxiety with the processes of change and a loss of the notions of fairness and fairplay which Powell & Pressburger had hearlity dismissed in The Life and Death of Colonel Blimp.

As You Like It (1937). Directed Paul Czinner (David Lean Editor)

One of Our Aircraft is Missing (1942). Directed Powell & Pressbuger (David Lean Editor)

The Bridge On the River Kwai (1957). Directed David Lean