Follow-up to Planning and Producing a Media Product: Part 1 from Kinoeye

How to write up and present your pre-production planning

It would be sensible to open up your ideas on planning this by recognising that you may be fighting a battle with the effects of previous advertising. This could be the case with many health campaigns including smoking and healthy eating style campaigns where the desires of the target audiences have been awakened. As a consequence they think often at an unconscious level that the product in question will somehow satisfy these desires. Below I have laid out the things you must include in your planning and how they must be presented.

Presentation of the planning section of your project file

These points must all be included. Overall they will gain you a potential 30 marks. 26 marks will get an A grade in this section which everybody can reach.

It is difficult to overestimate the importance of this unit for the OCR AS level from an educational perspective. This unit gives you the opportunity to work through all the aspects of planning ANY media product bringing the product to fruition and learning how to consider it as a pilot project by testing it out on the audience to prove that it is a good product and by providing you with the necessary evidence to show any potential commissioning body that your product is worth backing.

Advertising is commisssioned on a commercial basis. The financing can come from a variety of sources including government agencies, industry and commerce and independent charitable organisations.  Whatever the source of finance the commissioning organisation will want the best possible value for its money. It will want to reach it's target audience both in the content of the adverts and in terms of whether this advertising is designed to go in the right places.


Imagine you work for an Advertising Company

Imagine you work for an advertising company and you are responsible for making a presentation to a charity which will reward the winning company with a £100,000 contract to try and reduce smoking amongst teenagers.

The first thing you should do is research other advertising products and campaigns. While you are doing this ask yourself the following questions based upon the master question _Why is it that teenagers persist in taking up smoking?_ This is an important question because despite considerable pressure through advertising and trying to tighten up laws on selling tobacco to young people and tightening the laws on smoking in pubs and with change in the law regarding the minimum age for smoking likely to be passed it is still a serious problem.

On the surface then, no vaguely rational person would even consider smoking. The fact that many apparently rational people do smoke is therefore the issue that the clever advertiser will focus upon. 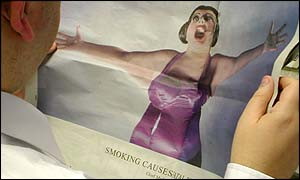 What a good advertising company needs to do is to understand what it is that is making their target audience tick. In this case we are looking at teenagers who take up smoking. what can it possibly be which makes them desire to smoke? This is the fundamental question for an advertiser. Once they have some ideas about this then they can design a campaign with counter-messages and alternative packages of desire.

The functioning of desire should not be seen as anti-reason. The social and cultural desires which contribute to the culture of smoking are inherently resonable. On the surface smoking seems to offer a fairly straightforward way of developing ways of communicating with people.

The idea that advertising can manipulate desire so effectively eventualy led to a ban on cigarette advertising by the government which came into force in 2003. Click here for a BBC story on the coming of this ban.

Shrewd tacticians and strategists try to know everything they can about their enemy.

The tobacco industry has built itself up on the basis of appealing to unconscious desires. Sexy, a sense of rebelliousness, glamour, creating a sense of a smoking community through social interactions which can cross class / gender / ethnic divides, associations with celebrity,a sense of adulthood.

There is then a deeply embedded cultural milieu of smoking. The fact that I have mentioned the term a sense of... several times shows you that these these cultural factors within our lives are hard to quantify and measure in a meaningful way. These factors are therefore more powerfully persuasive than the logical factors of health, expense etc. which anti-smoking has concentrated upon.

Looking into a history of the smoking industry you would quickly be able to identify that at one time issues of class, status and gender were associated with smoking.

In terms of gender at one stage the notion of women smoking was extremely threatening to men who in better off society would withdraw to the smoking room after dinner to have male power conversations whilst women who at that time couldn't vote also couldn't smoke.

The right to smoke in public therefore started to become associated with women's rights and rebellion against the system. Advertisers were quick to pick up on this. As the smoking market became increasingly saturated as most men at some point were smoking the attractions of doubling the smoking market by getting women to smoke became very attractive to the tobacco companies.

A nephew of Sigmund Freud's was a senior executive in an advertising company and he arranged an incident when several upper class American Women on a 4th of July parade would start to smoke in public. Of course the press had been informed that something significant was going to happen on this parade and the subsequent media publicity on all the front pages was the launch of dozens of successful advertising campaigns glamourising smoking for women.

bq. The UK's second largest cigarette firm Gallaher, makers of Silk Cut and Benson and Hedges, now prints "For Adult Use Only" on every pack.

Frequently these campaigns have relied purely primarily on powerful visual messages which are associative and work at an unconscious level. Film stars , leading politicians, "celebrities" even sports personalities have in the past been associated with smoking. Smoking equals success seems to have been the underlying message.

The advertising aesthetics have in the case of Benson and Hedges been held up as models of good advertising. Often the cigarette brand is signified by the aesthetic rather than 'in yer face' kinds of promotion: 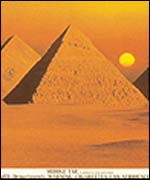 Restrictions on advertising means that Brands known only for cigarettes are using other techniques to build their brand. the Marlborough brand owned by Philip Morris have done this as the BBC has also noted:

bq. In recent years, tobacco companies have branched out into clothing and lifestyle products to build brand awareness. Marlboro launched a range of clothing and BAT has experimented with branded coffee shops 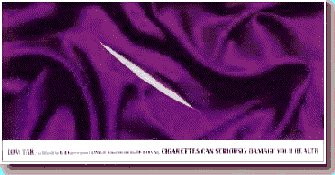 Being associated with style, elegance sophistication and power places the brand very high ensuring the opportunity to charge a price premium. The sports below manage to be associated with all these highly valued traits: 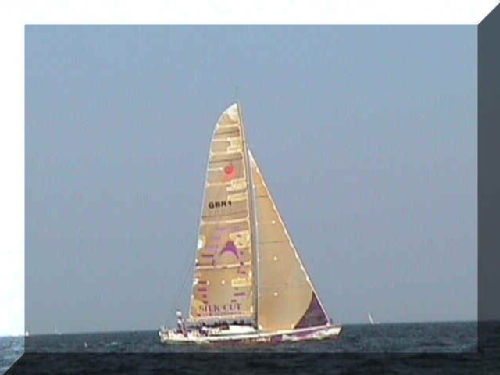 The Le Mans Winning Jag was also an important method of branding associating cigarettes with success: 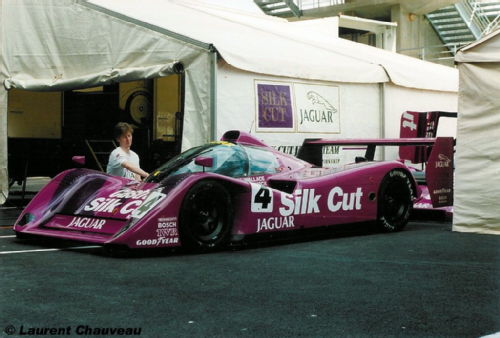 In this section you should now begin to recognise that researching the subject which is the subject of your commercial brief is vitally important to the success of your project. You shouldn't just research campaigns against smoking. you may have much to learn from exploring campaigns to encourage smoking. In the next section we will consider how to execute and lay out the overall planning of your project.