All entries for Wednesday 21 November 2007

UK Broadband Usage Grows Inexorably....Digital Divide... Gridlock....Higher Prices are some of the Possible Outcomes: Can technology ever make us happy? The BBC technology pages report that:

Information gathered by National Statistics (ONS) for September show that 88.4% of Britons are choosing to use broadband rather than dial-up.

This is approaching an exponential rise as in Aprill 2003 only 17% of a smaller number of users had a broadband connection.  However some members of the industry are worried that this massive rate of growth is set to flatten out dramatically. some even plead a social justice argument to ensure that the development of broadband accessibility will not flag too badly:

"With almost 40% of British households on the wrong side of the digital divide, the social and economic progress of the UK will be stalled unless the great majority of these homes can be brought on to the internet,"

As much as anything this shows how British society has become more and more polarised along class lines despite the New Labour government now in office for over 10 year committing itself to ensuring that there would be full digital citizenship.

Perhaps there is a case for a flat-rate national license fee to be levied just as there is is with the TV license. The fact that the BBC has historically beeen able to deliver a universal service to UK citizens utilising advanced technology shows that it can be done. Of course Gordon Brown's friends in the City might be a little sceptical of this possibility, however where there's a will there's a way. Surely the point of good government is to provide universally accessible infrastructure such as roads so that the rest of the economy can thrive.

Broadband for all at an affordable price. Look what a committment to broadband has done for South Korea - they're all online gaming geeks. OK so maybe Broadband prices should go up after all  :-).

In the US they have a more creative use for broadband than the Koreans:

Nearly 75% of US internet users watched an average of 158 minutes of online video and viewed more than 8.3bn video streams during May, according to research by measurement firm comScore. 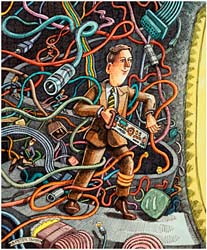 What complexity broadband is leading too...look out for "Bytelock" a word for the future grunged up version of cybersapce.

This worries many that a NetGridlock will ensue so the answer is similar to that of the argumnent about building motorways: create more capacity. Oh well at least the carbon footprint is a bit lower than car gridlock!

The explosion in popularity of online video could lead to increases in the cost of broadband for UK consumers.

Internet services providers, such as Tiscali, say that the raft of recently launched on-demand services will "undoubtedly" congest the network.

Freeview High Definition on the Way?

Finally Freeview Looks as Though it will Deliver High Defintion TV

A brief article making sure you are aware of likely changes in the British Broadcasting environment.

On the 20th November 2007 the Freeview consortium which includes both the BBC and Sky along with Channel 4 and Five announced that there had now been technological advances which meant that High Definition (HDTV) could be delivered through the current Freeview system without the need for more bandwidth. Previously they had been campaigning for more bandwidth which OFCOM had been unenthusiastic about.  As they had denied that it was possible that it would be impossible to do this and that they made the announcement the day before OFCOM was due to announce its future planns for Digital Terrestrial TV some people are likely to be upset reported Ben Fenton in the Financial Times:

The reversal is likely to infuriate Ofcom, which is due to publish its own proposals today for the future of digital terrestrial television - a market that includes Freeview (Fenton FT 21st Nov 2007).