The book cover is from Godard's Le Mépris (Contempt) featuring Michel Piccoli and  Bridget Bardot.  A film in which Godard was forced to make a voyeuristic take of Bardot to satisfy the producers need for salacious images. Godard of course makes a film ironising the role of the American producer and their insatiable commercialism amongst other things.

If only there were more film studies books written like this! This is one of those admirable books which has been written by a leading expert but combines a lightness of touch, a synoptic vision able to draw useful comparisons between countries, directors and films and avoids recourse to over-theoreticism much beloved in certain quarters of academia - not that Nowell-Smith isn't able to hold his own in this sphere. It quite simply isn't the point of the book. It is the sort of book which European Cinema enthusiasts desperately need more of. Far too often books of essays cobbled together by an editor come out in order to satisfy RAE type publishing requirements providing disparate although often insightful analysis of individual films at the expense of coherence. This is increasingly divorcing academics from real audiences interested in Euopean films both past and present. If new audiences are to be attracted to these films in a context which goes beyond the usual academic parcelling up of the period into 'national movements' combined with lots of textual analysis then this is the sort of book which needs to be written. No hagiographical commentaries, no over-weighty attempts at 'theory' and no misplaced and tedious attempts to incorporate everything into a 'postmodern' discourse. This is a pleasurable and insightful read.

There is often little attempt to contextualise films either to other aspects of cinema contemporary to the times being written about or to the social, political,economic and cultural tendencies, which define the cinematic moment. Nowell-Smith overcomes all these hurdles adroitly. He moves from the enigmatic representations of Antonioni through the gritty Brit documentary realism to the joie de vivre of the nouvelle vague seamlessly. The changing narrative structures, the changing situation in censorship and the key production concerns, and issues such as Vietnam, Algeria, the Hungarian Uprising, and the Suez Crisis are all brought into play in a highly relevant and readable way.

This is a book which avoids the kiss of intellectual death embedded within the text book mentality prevalent at pre-university level as it contains individual vision. It avoids the patronising 'bite-size' mentality of most of these but it doesn't make assumptions about knowledge. It carefully explains things as it goes along whilst still maintaining the rhythms of a proper book. It is the best overview of the period I have come across, providing those who saw some of  the films at the time and who still have fond memories of  them an excellent  route into  reviewing  the films.  It wil eanbel them to place the films into a wider pattern rather than having a strange hotch-potch of memories which never slotted together at the time. For those just gaining an interest in the period it provides an excellent introduction and opens up a myriad of paths to follow. It is a book which I can comfortably recommend for enthusiastic A2 students and undergraduates. Whilst it is unlikely to hold many surprises for the seasoned academic it is clear that they are not the target audience.

European Film Studies has for a long time needed more books like this which have the coherence of a single author overview underpinned by the kind of specialist knowledge neccessary to give great depth to what on the surface seems to be a simple statement. It comes thoroughly recommended for all librarians for school, college and university first years as well as for the general cinephile who might well get to see many of the wide range of films referenced but find difficulty in making any kind of overall sense to them outside of the pleasures of the text itself. Nowell Smith also manages to bring together strands between movements and points out that Italy didn't need a 'new wave' in the way other countries did because being the leading filmmaking country in Europe from the neorealist period until the waning of the new waves at the end of the 1970s there was a continuum between the older styles and directors and the newer ones rather than the attempts to make a radical break with the past. Neorealism had largely achieved this with the fascism which went before it. Anna Magnani in Pasolini's Mamma Roma 1962. "A Rome which was a microcosm of every possible contrast between new and old, rich and poor, developed and primitive, north and south" (Nowell-Smith, 2008, p156)

One aspect I liked was Nowell-Smith's little asides about Stalinists and dogmatic Trotskyists. Also his knowledge about British political changes on the left as Western Marxism was born out of the vacuums left because of the disgust with the Soviet crushing of Hungary in 1956 was of interest. As someone who is currently in the throes of writing an institutional history of the British Film Institute (BFI) his comments about using Penelope Houston and Lambert from the cinephile magazine Sequence which had gone bust after 14 issues was amusing:

Dennis Foreman, who had grand plans to give more focus to the lively but dispersed film culture he saw emerging all around him, offered Lambert and Houston a golden opportunity: forget trying to keep Sequence alive and instead take over and revitalise the institute's established but stodgy magazine Sight and Sound. (Nowell-Smith, 2008 p 31) 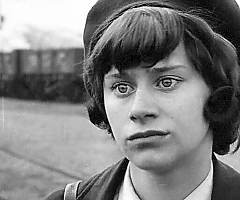 Rita Tushingham in Tony Richardson's Taste of Honey (1961). "A Taste of Honey is the most 'Free Cinema' and also the most 'New Wave' (in the French sense) of the British realist films. It is the lightest in touch, the nearest to improvisation, and the best rooted in its chosen setting." (Nowell-Smith 2008, p128)

Nowell-Smith's wide-ranging knowledge serves the reader well for on the previous page to the one mentioned above he he succinctly brings in what he considers an important moment in the development of French cinema which involved getting the backing of Cocteau and founding a high profile cine-club Objectif 49 which opened in May 1949 and the establishing of a festival the Festival du film Maudit (Festival of the ill-fated film) in June of that year in Biarritz. The festival showed many films that had been banned in the past such as Visconti's Ossessione, and the Brecht/Dudow collaboration Kuhle Wampe. The festival also showed many other fringe type of films. There was an underlying hope of unifying the cinephiles and the left in France although this had to wait in the event. It was an interesting insight which isn't provided by a large book on French cinema Williams' Republic of Images for example.

Nowell-Smith organises the book in a very useful way. He briefly reviews 'What Were the Sixties?' concisely and realistically cutting through the nostalgia which makes them 'Swinging' and summarising the situation well. He then reviews the general contextual situation in the 1950s in the build up to the new waves, and also reviews the changing film culture and the importance of new criticism within that culture as poles of difference emerge in France through Cahiers du Cinema and in the UK through Sequence. He then proceeds to examine the new cinemas themselves taking into account the tensions and contradictions inherent within the various systems of censorship, the changing narrative structures and technological issues such as new zoom lenses and the introduction of wide-screen.

Nowell-Smith succincntly runs thorugh the changing narrative priorities that were emerging at the time. instead of the purposive heros driving the plot cinemas of the 1960s began to examine life without clear purpose. Antonioni can be seen as an extreme example of this notes Nowell-Smith (p 104):

The new cinemas everywhere are peopled with characters who either do not know what they are supposed to be doing or are impotent to achieve their goal. Monica Vitti on the deserted volcanic island in L'avventura (1960)

Nowell-Smith then reviews the film movements of the time, British Social Realism / Free cinema, The French Nouvelle Vague and then the situtation in Poland and Czechoslovakia as well as looking at the changing circumstances in Latin America partially stimulated by the Castro led revolution in Cuba. Finally Nowell-Smith looks at the role of the auteur through brief synopses of Godard, Antonioni and Pasolini.

Nowell-Smith has a nice concluding paragraph which will hopefully encourage older readers to revisit the films and younger ones to try the films out as more and more become available on DVD:

Rather than die, then, the new cinemas dispersed. But they had created a legacy, even more widespread than that of neo-realism a decade and more earlier. And unlike neo-realism, they stand today forty years on, as representatives of modernity. More valuable still, the modernity they bespeak is liberation. and the message of modernity as liberation is not one locked up in a bottle: it may no longer be available in the cinemas, but it is there for the asking when you unwrap that DVD and put it in your player. (Nowell-Smith 2008, p 216)