Nown Downloadable: Talking About Other People

IF YOU DIDN’T manage to get hold of an exclusive copy of the Panama E.P. (less than 50 were made only!), click your way to our myspace NOW to download the four songs on mp3!

Go go go! And let me know what you think on this blog.

I Forgot: Our E.P. Out This Week 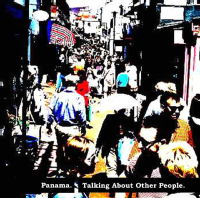 Yeah, kind of forgot to announce it here: Panama’s demo E.P. Talking About Other People is out now, and for sale for a pound. Ask any of us if you want to get one.

Wonder who Panama are and what they’re about? See previous posts on this blog:

Listen to our music here).

Our Big Rock Career is taking a flight. You can now hear some of our tracks on our new myspace-page. On this page you can also find gig dates (some week 10 stuff confirmed, more to follow) and a little bio.

Waiting to hear your reactions!

Recording an E.P. in Ten Steps

Now up on my blog: 10 photos of Panama’s demo recording. Click here to check it out.

Week ten is coming closer, and so is the Student Arts Festival! As I recently started drumming for a band, just for fun, I’m thrust into some new developments: a jam in the Cooler! Apparently my band is called The Multiskins, and apparently I’ll be playing along with them!

Naturally, my other band Panama‘ll be playing as well, venue and exact date still to be confirmed, but it seems it’s going to be on the Tuesday of week ten.

Come check it out, or check the web page for more info!

The last few days have been marked by much craze around my head. Today was the first day (out of two) of exams for me. In the running up to Thursday, I was occupied with preparatory work and revision for my exams on Making of the Modern World (history) and Sociological Imagination and Investigation (guess).

Simultaneously, I was distracted by the grand events taking place on the dry mainland of our continent. After a hard day’s revision in the library on Sunday, I came home to hear that the French had defeated the European constitution by a majority of fifty-odd percent. Quite happy with this news (as by now I’m a convinced anti) I speculated that there would be no turning point for Holland either, on the first of June. And I proved to be right, only more right than I had predicted myself. A defeat of some 61% came as quite a surprise to me, from the flexible, Euro-oriented Dutch. Yet the feeling of discontent and love of independent freedom was quite likely to have contributed to the Dutch “nee”.

In a good mood, I decided to go to the Graduate yesterday, for a pint. Sharliza was around too, and asked me to drum a song for her. So, I found myself playing the drums to an accoustic version of her punkrock “I Feel Great” and Radiohead’s “Fake Plastic Trees”. Very unprepared, yet a nice feeling to be able to climb on the stage with relative ease again, after a long period of making no music at all. Les and Sharliza are having me as their band’s drummer now, which for me, as a guitarist, is quite a relaxing and unworied position to find myself in. Panama, the band I’m in with Tommy (Rootes), James and Sun Ho(Whitefields) seems to be getting some shape as well. We have a first gig planned for week 10. I know, it’s kinda late to get started, but considering I’ve only started singing this term, I think it’s not that bad at all. Our repetoire consists of around 10 (some unfinished) songs, and a few more ideas. Tommy and me are well inspired lately, which feels great. Our track list consists at the moment of:

Possible Ace of Base, Muse and Soulwax covers might be added to this, as well as a few more songs once they’re finished.