All 12 entries tagged My Poetry

A Parable on Free Speech

When Mr. T., twenty-three years
of age, a university student
was asked, his answer was
concise and well-aimed.
Freedom of speech, such a
non-question. Indispensable

like air. He, you, and I had,
after all, heard it all before.

So why does T. act so much a dog
alike? Why are we so often like T.?

I wrote this poem for a student magazine under the theme: “freedom of speech”. It wasn´t taken in and did not get published; admittedly it has a somewhat harsh and moralising tone. However, I also wonder whether my friend, whom I sent it to, finally understood it. It would be a pity if he didn´t. I hope, at least, some reader does. The intention is, after all, that the message arrives. 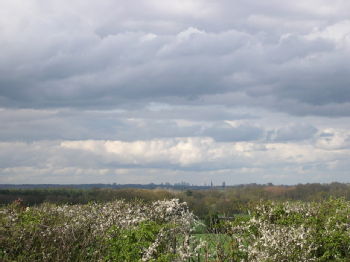 Clouds over an English landscape!
Over the fields
Dark clouds

There at the border of town
Chestnut leaves thick, green
Then liberation: rain

I decided that if I were justified in writing about exam stress at all, I would have to take it to a whole new level of creativity if I wanted to avoid being told off by hordes of even more worked-up people (see a number of the top-ranking blog debates at the moment).

I decided to write a poem about it, in Dutch, and then went on to translate it. Apologies if it does not quite flow as it ought to.

(Not within a few seconds, nor
miles away from where my professor speaks.
This thing transcends time and space, yet,
‘transcends’ falsely implies travel.)

God and I walk through a long tunnel
He asks me in a friendly tone how things are, etc.
At the end of it waits my mother
She looks upon my life,

The output of my work, my modern opinions,
my cynical sense of humour
And approves of it without conviction.
God nods, too, puzzled and in thought.

Over my head flies a bird whom I greet
He stares back at me in surprise
I have travelled many universes
of understanding away from him.

By dusk, the lamps shed their lights
We are young and share a place and time

We come together after dark
We walk our walk, speak
The words sparked by our thoughts

No time perhaps may have seemed darker
More prone to words in which’s emptiness
A vacuum threatens
But we like it, still, and thrive in the dark

It has often been said
As happens to words carrying a loaded meaning:
Children of the night are we
Stripped off all our innocense
Except, indeed
In our power to act
Fruits of power and sheer will.

I remember, it keeps returning
Least expected, it zooms around me
I remember what I forgot
Or at least, so I thought, but
Every time I remember, it puzzles me
Leaves me confused to see me
But younger, different, so committed
To something there, in the past
And left behind.

How much time before a signpost may be seen?
How much walk, and which way, which direction?
I am afraid that I’ll be tired, and that I will not find it
That which I am looking for.

How long still, before a people’s face will fade?
Their great shared being, collective desire?
That the sea washes over, time after time
Apathetically, yes, so careless and hurting
As it is washed away.

Shout I will, desperately
And miles away it will resound
But who will hear?
Before my voice dies away.

Not without a fight, not like that, no!
I will struggle, loosen a grip of my wrists
Attempt to shake it off, grasp
That it not be air!
That it is not a void, I beg.

The warm wind
Swiftly touching upon my hair
Lovely caressing my suffering face
This wind, travelling
Ages and places
To share this moment with me
And moving,
moving always
To be what it forever has been:
A feather so light
In this stone world so big.

This warm wind
People here are so familiar with
Bring hope from another place
Creating routes of space
Where there seems no way out
This breeze carrying
a scent so fine
Putting in place our part here
Reminding me of you
Who, whether it takes hours,
months, years,
Whether it’s elsewhere or here
Will be feeling it, too.

Where is the spark
It used to fly around
Where-ever I stood or went
My body, my soul
Dressed in a suit of
Flaming desire

The places where I stood
Have become something
Not of this world
A story, a poem
My dreams were pure of
Passionate heart

Every day now
Once or twice spinning
Back the wheel of time
An icy, mat longing
Though inculpable, unwanted
Yet, strongly tearing me.