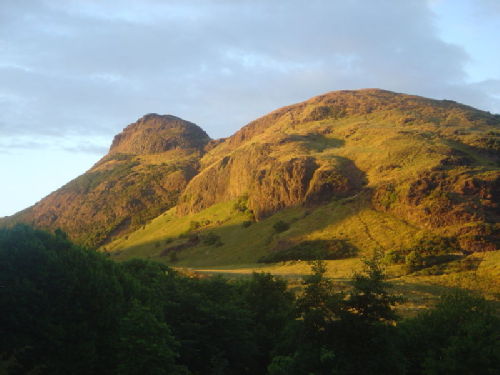 Arthur’s Seat is an extinct vulcano, it is over 250m above sea level, the first of it’s two words is the same as Arthur Vick, and it is the slope that we are now ascending. A path right in front of one of the British queen’s dwellings, Holyrood palace, splits into a left, into the hills, and right, up along the city’s edge. We have taken the latter option, assuming we would be on the top in no time. As soon as we started to walk up, a drizzle set in. It is the first rain that we got since our arrival more than a day earlier.

But the path is endless and in the meanwhile it has taken us from halfway up to all the way down again, all this time scratching the city’s edge of residential quarters. When we’ve finally reached the path that really takes us up, the drizzle becomes accompanied by wind – heavy, continual bouts that nearly tip us over the edge, it´s scary!

But then the top. A soft grassy slope, where we lean against the wind. My spit flies more than 10 meters. A short climb and we’re at the real top. We hold on firmly, because I can all too clearly imagine myself just flying straight into the Firth of Forth on the other side of town. We look out over a majestic view of a great Georgian city. The castle hill (another extinct volcano), the crazy-design Parliament, several churches, the disorder of Old Town and the rationality of an enlightenment-informed provincial capital in New Town. The monument hill, complete with Roman-style columns, and the cemetery just a stone’s throw away where David Hume has his final resting place.

A view over a Great City with capital letters, from a majestic hill top, what else does one desire? Well, a safe descent would be something. Because we still want to roam the Royal Mile, see other people eat haeggis (since I’m a vegetarian) and go in and out of tourist shops selling exactly what we expect them to sell: checkered scarves and kilts. Edinburgh is one of these cities that are comfortable, not too busy about themselves and make you want to stay a bit more. To have a Scottish ale and wonder about what exactly it is that makes Scottish people different from the English, and subtle yet sure difference. And that’s just what we’ll do when we’ve come down from Arthur’s Seat. 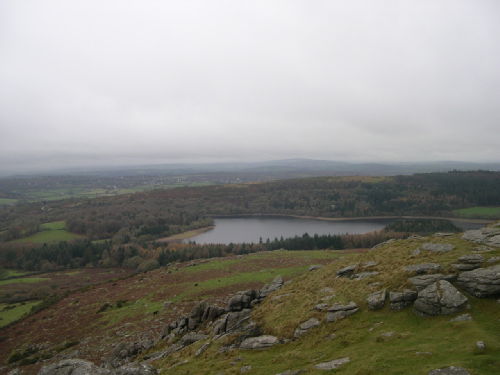 Nights of indoor stuffiness are becoming longer. Evening darkness encroaches on our bleak daylight day by day; according to my Warwick Academic Year Diary, now we are only minutes away from a four o’clock sunset. As I set out to do my laundry in the nearby laundry room, my feet slip away in the grass-turned-into-mud.

Shiny, robust Autumn has come to an end. What was healthy grass is now just a surrogate, a cover up for fields of sticky, streamy, underground mud. Fogs penetrate the country. The only variety of weather is provided by a sad drizzle that occassionally comes and then goes.

I notice my struggle to get up on time is getting more difficult by the day. My lust to leave the house is diminishing, in short, the forces that I always resolve to prevent from encroaching upon campus existence once more prove stronger than me. I get lost in studying: Vichy France. I fall into the classical trap that professors set us which is to unconsciously filter out timeless, classically tragic dilemmas of historical materials.

To collaborate or not collaborate? Is the direct result enough reason to justify it? For the moment I try to fight off my emerging gigalaiskus (an Estonian word recently coined in our flat which means something like super-tiredness) and to ignore winter’s inevitable coming.

On the photo a lake in the Dartmoor national park in Devon, where I went climbing last weekend.)

Sometimes you think something up and wonder whether you’re the first one to see it (it apparently being just a brilliant stroke of coincidence) or whether you’ve just come across the reason for it’s being as it is (the underlying idea or intentional correlation).

Well, I just had a little idea of the above category.

You know how people write “x” at the end of text messages and emails, meaning “kiss”. But why x? Is “x = kiss” just a random social convention, meaning kiss could also have been put down as “y” or “z” if it was widely enough used, or is there a more profound reason behind it?

Then my little thought came up. In Spanish the letter x is pronounced “ekys”, sounding somewhat like a Spanish person saying “a kiss” in English.
So does “x = kiss” perhaps originate from the Spanish? We will probably never be able to confirm that with all certainty.

If a Martian or a Dutch observer came to England, he/she/it might draw the following conclusion.

In this country, Sarah is the most common name for a female student.
For male students, it would be something like Thomas.
Nearly half of all campus cleaning ladies are called Sue.

And cleaning gentlemen… with one notable exception, haven’t come across those yet!

On Laundry and Growing Up 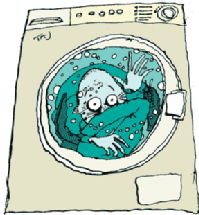 At the beginning of yet another week of university work, reading week this time; amidst the issues of serious concern that I study; despite the increasing air of self-responsability that befits the approaching bachelor’s degree (tongue in cheek, just so you know), I cannot help but ponder on the simple and little things in life, yet of no little importance either.

Like this morning. As usual, doing laundry is a process that somehow manages to dominate all of my morning, inevitably. But lately there’s evidence of difference. When I come home and unpack my clothes and put them away, I bundle my socks into pairs. How many have gone missing over the past six years after this regular routine? How many days of studentness have I walked around in dissimilar pairs? Things however seem to be changing. Lately, the machine always neatly returns the same number of socks that I put in.

And so, in yet another insignificant little way, I realise I’m growing up, bit by bit. And ready to take away a BA.