EU Treaty: Give the People a Voice

The wind of change seems back in Europe. Within three years after the French and the Dutch rejection of the Constitutional Treaty for Europe, Barosso and Brussels are back with a “new idea”. Last week Europe’s leaders cheerily signed the document, which, according to the Portuguese EU leadership, marked an important day for Europe. Project developers and member state masters patting each other on the back in the absence of an audience: a familiar sight in the history of the European project. 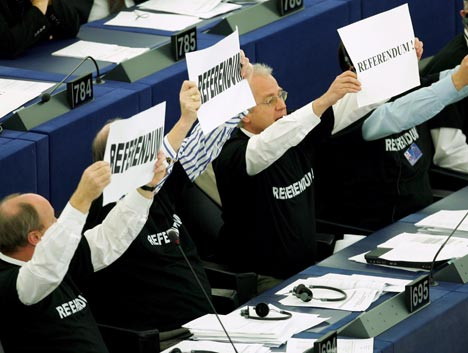 Meanwhile, in Brussels, MEPs from different countries (among them Italy, Poland and the UK) raised a protest against the process’s lack of accountability. They wanted European citizens to make up their minds about the document that might mark further integration and Euro-identification through a referendum. These people, while not always my choice of politicians, have a point. Apart from the question of the need for a referendum, it seems certain European governments are quite systematically presenting an image of a quite different document than the previous. Yet, some most eminent authorities reject this presentation of the facts as misleading. A UK Government council flew in the face of PM Brown’s statements by declaring that the new treaty has overwhelmingly stayed the same, while the Economist and former EU Commissioner Bolkestein agree that if a referendum was decided last time, so it should be this time. Otherwise, they say, people will feel that a hardly changed document is brought in through the back door.

The matter is hardly a question of ideology. In fact, the pro-referendum camp transcends political creed and focuses on the need to consult the people on this treaty rather than whether they should vote for or against. The European Referendum Campaign, for example, can be seen to have gathered subscribers from very diverse political backgrounds. The ERC has set itself as a goal to promote the introduction of referenda in as many EU member states as possible. They want a free and open debate about the desired future of Europe. And while Eurocrats may protest that this future has already been subscribed to years ago, a public debate about the European project is a fresh and praiseworthy phenomenon.