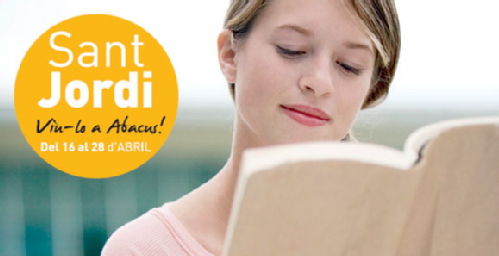 Maybe Spain has no more festive days than any other country, but they surely make the most of each one of them.

The day´s coming was being announced weeks in advance in all metro stations and it was hard for me not to notice: a photo of a pretty, blond girl tranquilly reading a book followed me wherever I went. (Why is it anyway that the campaign´s designers chose to advertise a blond, and not, like the vast majority of Spain´s population, a dark-haired girl? I think I know the answer.) Today, all around Barcelona´s city centre as well as all over the university´s campus, book stalls sell second-hand books for 50 cents or a euro.

Wholly unplanned the International Day of the Book coincides with Sant Jordi, the Catalan equivalent of Valentine´s Day. The 14th of February is not known here. Today however, happy couples parade around with lipstick-red roses or (slightly more nationalistic) yellow roses with red edges, adorned with a little Catalan banner on the wrapper.

I realised the pretty blond model on the poster, probably without realising it herself, advertises both of today´s reasons for festivity. At least I would give her a rose if I bumped into her.