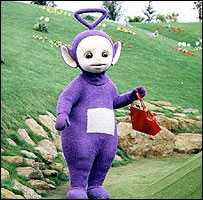 Writing about these two stories: Teletubbies in Poland, Kidney show in the Netherlands.

It’s a schezophrenic existence sometimes, being the son of a Dutch father and a Polish mother. The child of two national legacies, arguably the world’s rediculously most liberal country and Europe’s most conservatively Catholic nation, I find myself standing between two at times metrically opposed world view points.

In Poland, a government official that dares to call herself “children’s rights spokesperson”, Ewa Sowinska, singled out the Teletubbies’ Tinky Winky as a potential danger to Polish kids. The ultraconservative current government is having child psychologists looking into the case: they want to know whether Tinky Winky is gay, because that would be bad. Not long ago one of the governing Kaczynski brothers (they are Prime Minister and President respectively) said in a conference that he had no problem with gays taking public positions, as long as they keep it to themselves. Soon kids in school will be kept away from any “homosexual propaganda”. It’s loathsome.

And then the Netherlands, paradise of the free. A tv show is to be broadcasted on tv in which a terminally ill woman will decide to whom she will donate her kidney after she dies. The chairman of BNN, the network that is to air this show, defends it as a useful contribution. The chance for a kidney for the contestants is 33%,” he said. “This is much higher than that for people on a waiting list. You would expect it to be better, but it is worse”, he said. Turning peoples hopes of survival and a longer life into educational entertainment, how disgusting is that? I cannot believe people who come up with something that terrible can respect what they see when they look in the mirror. And I can’t believe this is what people make of a country when they are given the freedom.

Today I feel ashamed of what people must think of me when I tell them where I come from. I’d rather be the son of a Danish cartoonist.