All entries for Friday 22 September 2006 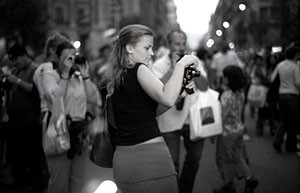 Today is the first day of the celebration of La Mercè in la ciudad bonita. This festival, four days of party (Monday is a free day for all) is held in honour of the Catholic saint Mercedes, who is the city´s patron.

Not much religion involved though, from what I´ve been hearing. It´s more of an excuse to have excellent parties and events throughout the city, even beyond the city centre. With my indistinguishing foreigner´s eye it appears to me something of a carnival party.

Towers of people, up to eight layers high, will show their skill. From photos I saw that they reach up to the third floor of a building, with a little child at the top.

Dragons shooting off fire march through the streets, as well as giant puppets in the shape of kings, celebrities and other things. The skill is to carry the biggest, which naturally weighs most as well.

There will be displays of fireworks, bands from Spain and abroad, beach parties, all kinds of processions and markets. There might be some alcohol involved and most probably fairly little sleep.

It is not like that I will update this blog anytime before Monday or Tuesday. Like Brasilian football players during the Rio de Janeiro carnival, I´m disappearing into the crowd for a few days. Don´t try to find me!