All entries for Friday 21 September 2007

Poverty In the U.S. Is Already There 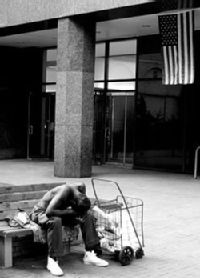 While ex-president of the U.S. federal reserve Alan Greenspan criticises the Bush government for schandalous book-keeping and warns for a serious breakdown of citizen’s welfare in the nearby future, facts and news over the past few years schetch a much starker image.

Back to an ordinary day in 2005. As I upon up the international news section of the Dutch newspaper De Volkskrant (roughly equivalent to the Guardian), my eye falls on two hardly visible notices. One: “Poverty in the US sees a significant rise over the past year”. Two, right above it: “Poverty in Asia declines with 10 percent”. How ironic. We are, of course, concerned here with article number one. According to the article, the number of people living below the poverty line rised from 1.1 to 37 (!) million. And this in just one year. [note: I’m not even sure if this is accurate, it is hard to imagine a change so great that it would signify nothing less then a revolution of poverty.]

The logically following question, then, is of course how “poverty” may be defined. Wikipedia speaks of an income of $ 9,800 annually, roughly € 7000 or £ 4,900, which will not be far from the figure adapted to come to these conclusions. But this is not the end of the story. We find, furthermore, that a much larger proportion than the 12.7% mentioned in the article, falls into poverty from time to time. A researcher notes that: ‘over a ten-year period 40 percent experience poverty in at least one year because most poor people cycle in and out of poverty’. In my eyes, that suggests that 40% of the US population wavers around an annual salary of less than $ 10,000. Which again points out the gigantically looming misfit between the generated wealth and its distribution among the population. Mr. Greenspan was not exaggerating when he issued a public warning of economic collapse, in fact he understated the gravity of the U.S.’s social economic state.

Two more thoughts attracted my attention in relation to the above, leaving an unpleasant underbelly feeling. One: an article on the Guardian website today, entitled: “Only $1bn? It’s not enough for the US rich list”. Two: the UK does even worse with some 17% of its population between the poverty line. This amounts to 1 out of every 5 or 6 people. Even Bulgaria does better.