Barcelona–Getafe, Proud to Have Been There! 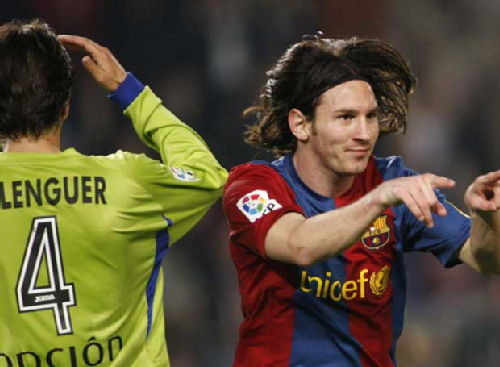 Yesterday I went to the first football game in a stadium in my life. And lived through 7 goals, of which 5 wicked ones (Barca 5 – 2 Getafe).

A quick note. If you read this quickly enough, the above link might still lead you to a short click of one history´s wickedest goals ever, that was made by Messi around the 15th minute. In retrospect, it looked frighteningly much like Maradona´s magic goal against England in the 1985.

My housemates had given me the best birthday gift imaginable. I had been wanting to go to see a game in Camp Nou before. Even though I was never a real football lover, this year it seems I´m slowly turning into one. Barca is more than just a football club, and that didn´t go unnoticed with me either.

So the game. I was struck by the fact you could still see everything so well despite the stadium´s overwhelming size (100,000 seats) and pleased to see such a quite unusual development of the game. 5-2, and that for a quarter final of the Copa del Rey seems quite infrequent to me. The atmosphere was good, we had brought the lyrics to the Barca-anthem with us so that we were ready to sing along when the players entered (...som la gent blaugrana!!!...). The Getafe fans were right behind us, which was a good laugh, even more so as the end of the game approached. As it should have been, the game left no doubt as to the stronger part of the two.

No Ronaldinho on the grass this evening, but who cares? The new Barca star is called Messi after all, and he kicked in two beautiful goals. As he left the field for the break, throughout Camp Nou it resounded: “Meeee-ssi! Meeeee-ssi!” We all love that player.

So, to go short: An amazing club, that´s always worth going to see. A game, that might be remembered for a while. A player that I might proudly tell future generations about: “I saw him playing once, in Barcelona in 2007!”.