Dutch Parliamentarian Ousted from the Country 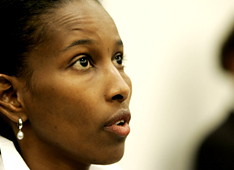 Here is a headline in the Dutch papers that I would like to pick up and share with Europeans as I believe it has a wider significance for immigration politics.

For as far as I am aware, the Netherlands are about to set yet another immigration harshness precedent: a parliamentarian of foreign background (originally from Somalia) is now to be removed from office and from Dutch soil before August, as she originally lied about her real name in a bid to gain Dutch citizenship.

For the last three years, Ayaan Hirsi Ali had sat in the Second Chamber (equivalent to the British lower house), where she represented the Liberal Party (VVD) and had been continually outspoken against certain strands of Islamic thought which she considered “incompatible with the legal state”.

From the outset, she had made it clear that she had lied about her name when she first came to the Netherlands, for tactical purposes. Only now, when this information somehow reached the wider media (not that it had been kept a secret either), Mrs. Verdonk, Minister of Immigration, had Ms. Hirsi Ali’s record tracked. Within 24 hours, the verdict was unequivocal: she had never legally obtained citizenship. What will be next in this sequence of events that increasingly make me ashamed to have such people at the head of our government? Our reputation of tolerant liberals is steadily declining, all because of a number of arbitrary measures. Look out in next week’s Economist for this story. See also her statement in English.

QUITE A FEW people have been approaching us Clemens-Streetians in front of our house or in the street, asking us for amounts varying between 10 and 50 p. All weekend we were getting more curious… What could this mean? Had the price for crack gone down? Were they really speaking the truth and hence short of 20 pence to get a train to go see their dying grandmother? Are money lenders in the back streets getting more pushy these days? Note that this small-amounts begging had appeared quite suddenly!

Until… one faithful day, I went to the supermarket down the street and there saw a sign advertising “Cans of Carling, 80 Pence”. No longer do I wonder.