All entries for Wednesday 15 November 2006

We Are Against Bologna 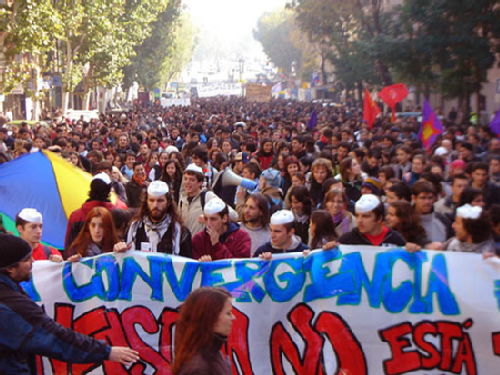 Tomorrow, students from all of Barcelona´s universities against the pending Bologna university reforms are gathering in the city centre.

So. It turns out Catalans are fond of a good portion of activism every now and then. In the last few weeks all of my faculty was spammed with “En Català” stickers to promote the use of Catalan and defy Castillian encroachments, as well as “Utilitza la llengua” stickers (a Catalan word play, it means both “use the language” and “use your tongue” which is why the stickers pictures two Catalans kids kissing). A bit threatening, all this Catalanist stuff, especially if you know hardly more than “Excuse me, I don´t speak Catalan very well”.

And then anti-Bologna. I should have seen the big march coming. Signs were around. “Passivitat és complicitat. Anti-Bolonya sempre” could be read on lecture room tables. Posters and stands full of brave and activist students. But this Monday morning, the campaign attacked full-swing. Those who had never heard of the Italian city before, could now read on every building´s wall that students here were against it, in any case.

This afternoon, as I was preparing for my first economics exam to be held in Catalan, some leader dude and a following came along with a megaphone, and as I am writing a really badly-sung punk song performed on the Placa Civica is once again emphasising that we are contra Bolonya. And, as if they thought me stupid and slow-witted, they also molested the only mobile phone top-up machine on campus with graffiti to announce to the world that they are against.

Probably too late with their protests, as the Bologna committee has been discussing this matter for a long time already, and is set to present the new legislation early in 2007. But we don´t care. We don´t care if anyone listens, we don´t care what method we use, all we know is that we are against something.