All entries for Thursday 12 October 2006 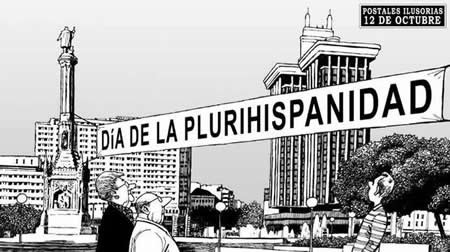 Today’s free day, the Dia de la Hispanidad is a weird concept, that was introduced around the era of dictatorships in Spain.

Here at the Autonoma it means little more than a day off from classes, and whilst we’re at it anyway, a long weekend. The campus has become a dead place, people are going home for a few days. Two days ago a banner appeared on the Place Civica (uni’s main square) announcing a protest march.

Cataláns protest against anything that rieks of Spanishness, or Spanish nationalism. Just last Sunday, a banner appeared on tv during the football match of Catalunya against the Basque Country, saying:

But this national holiday does indeed have a strange tinge to it. It celebrates the discovery of the Americas by Columbus, which initiated the colonisation of the southern and central American continent. Little wonder it disgusts the most fervent Catalánists.