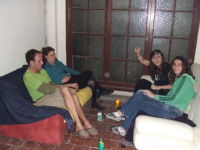 Some months ago, an invisible investor decreed that there shall be a lift in our building. A six-story building in the middle of the Old City, it has marble stairs but lacks the facilities to get old ladies up without exhausting them. Only, a lift would not exactly serve our interests, as we live just on the first floor. Anxiously, we anticipated the commencement of the construction works, instinctively knowing it would be something nasty and inconvenient.

Some three weeks ago they started. I knew, because it was difficult not to know immediately. I was woken up by drills and hammers which appeared to be drill at the legs of my bed. When I walked into the living room, I stood face to face with a worker, outside our window overlooking the patio. They were removing the patio.

A day later, there was no longer any patio. Before, we were able to cross it to get to the neighbours. Now there was deep staring gap between our two appartments. More workers seemed to come in every day. Another floor was taken down. Clouds of cement powder filled the staircase. One day, I noticed that, even though we had by now closed the shutters of the windows for privacy’s sake, I could still peak outside. There was a hole in our wall, the lift builders had rammed a hole in our wall!

Things are getting weirder every day. One morning when I woke up, we had forgotten to close the interior windows. The entire living room was covered by fine layer of cement dust. I decided to have breakfast in my own room. The entrance to our building was nearly blocked by tons of cement bags, and workers are going in and out. Where there was a door to a lower apartment, there’s now a cemented wall.

They have by now fixed the hole in our wall, without ever notifying us of anything. Incidentally, they managed to spill wet cement around the floor of our living room, including on a sofa which was on the other side of the room. But a lift? I haven’t seen anything yet.

Inconvenience has turned into a nightmare. After weeks of mess, there’s not a sign of a lift construction. And they have to work it six stories up. I fear there will be no rest until I leave this apartment.