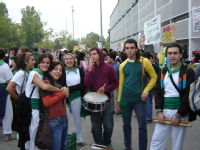 So yesterday it was finally time for the day I heard so much about, and not a word of it was exaggerated. Ten thousands of people came along to La Festa Major, the university’s annual feast, and it was quite epic.

In the morning a friend and me participated in a race, running 6 km, and your blog reporter is proud to announce he did the 6km just below 30 mins, despite very little training. And enviously confides that the winner actually took only 16 (!) minutes.

And then the amboracharse (getting drunk) part came quickly. As soon as my head’s colour had changed back from “tomato” to “peachy normal”, we had lunch with lots of beer. After which we left my campus flat and drank some more, in the meanwhile bumping into friends everywhere and struggling to maintain not smoking (see also earlier entries). Tasted some aigua de Valencia though, which is a nice mix of fruits and alcohol which is damn hard to discover among the sweet flavour.

And in the evening, we drank some more. Went to a birthday party where we suddenly found ourselves surrounded by girls drinking lots and lots of sangria and singing Spanish drinking songs! I didn’t know they organised parties like this in universities!

A Happy Thought For Everyone

Here’s a happy thought for everyone, once again wisdom taken from a Spanish toilet door.

“Happy is the student who, like a river, reaches his destination without leaving his bed.”