McDonald's in Rome – Taking on the pizza

The WBS MBA face-to-face Marketing course in Rome was invaluable. It comprised 3,5 days of theory covering various methods and tools and applied group work, as well as 1 day (on day 4, with some evening research work the night before) for a group assignment. The assignment represented 20% of the Marketing module’s final result, so getting a good mark for it is certainly beneficial.

What we had to do remained a mystery until the late afternoon of day 3. The task was to identify a business or organisation in Rome that we considered to be ‘good at marketing’ and justify the selection. We then had to conduct research to substantiate an assessment of how well they understand their customer, while evaluating if and how well their marketing mix works. Providing some recommendations for improving their success within the market was also suggested.

By this time our group had worked together on four case studies and we spent the evening before having dinner in the city of Rome, trying to conduct blind research on a topic we had no knowledge of. Within the group development sequence of forming, storming, norming and performing, I would say we were right in the middle.

Our first task was to brainstorm a few potential organisations. The list included Ferrari, a football team, the Catholic church, Prada, a gelato store, the Spanish Steps, the Vatican and even the Crowne Plaza St Peters (where the course was being held). While there were some decent candidates we kept scrutinising the ‘good at marketing’ requirement and also considered how easily we could conduct certain research online. We also wanted a brand that most of the audience would immediately recognise. The result – McDonald's.

We pitched it to Prof Lloyd Harris and it caught him by surprise. His comments seemed to echo our initial thoughts. Why go for a non-Italian business? There’s a risk there. It could pay off. Our response to these thoughts was that McDonald's would have a continuous battle to promote convenience and burgers over a culture that clearly promoted (perhaps myopically) slow food. One of the group members suggested that Italy, and specifically Rome, is all about the three Ps – Pizza, Pasta and Panini. (I have recently discovered the fourth P - Peroni!)

Our quest involved finding out why and how McDonald's was Taking on the pizza. That became our tag line.

We split our group of nine into two subgroups: the first focused on researching and assessing the customer segmentation and understanding piece; the second focused on evaluating the marketing mix. I was part of the marketing mix team, where the four of us each took one of the Ps – Product, Price, Place and Promotion. Our ultimate goal was to research and analyse the Ps, compile slide content, compile presentation notes, think of potential questions we could get asked by the audience, and provide references for the statistics and quotes we used.

We decided to do some work individually and to review and critique the consolidated version as a group. We set deadlines for individual research to be handed in, for slide content to be prepared, for the group reviews, and for dry runs. We spent the evening of day 3 covering ideas, research and some slide content. It wasn’t a late night. We must have gone back to our rooms by 23:00 (ish), whereas some groups were up for much longer. A suggestion for future attendees – get through as much as you can the night before. The time on the morning of presentation day flies by so quickly.

In the morning, we took stock of slide content we were missing and spent a couple of hours filling the gaps. As a group we edited, added and cut lots of content on each slide for about 1,5 hours and then performed a quick colour test on the projector. Since we were using a McDonald's theme, some of the arrows and box colours needed to be changed – the yellows and oranges were not the best option for a projector.

We took an hour for lunch, taking a break from the think tank to recharge and release some stress. It was a great idea to eat outside at a nearby café, as the fresh air and sunshine certainly lifted my spirits. It also gave us a chance to compare panini prices in a suburban cafe.

We then spent the balance of the time (about 1 hour) doing dry runs and refining our timing. The presentation was meant to be 15 minutes long, so we aimed for 14. The slide deck already contained about 12 slides so we knew we were pushing it. The delivery had to be timed to perfection.

This is the basic concept of what we conveyed as our assessment of McDonald's in Rome. It's split into the main topics we discussed.

The two main target markets we identified were local teenagers/students and tourists. An additional set would be families, which we suggested could be targeted more aggressively by pushing the healthy menu options. A Happy Meal Sport Camp is one sign that McDonald's in Italy is trying to promote a more active lifestyle.

We discussed demographic and psychographic profiling of the desired customer segment and looked at how they created local celebrities (through advertising) and menu items devised by a Michelin star chef to become more adaptable and more appealing to Italian customers.

Feedback and interaction with consumers is also encouraged through the Italian Facebook page.

McDonald's retained the international menu options for the tourist market, and to attract locals who wanted to try the world-famous burger and chips combo. They also introduced varieties for the local palette; including panini-styled burgers or sandwiches, a McItaly burger, mozzarella sticks, a parmigiano snack, and some new healthy items such as cherry tomatoes and kiwi on a stick.

The Italian coffee and sweet culture is reinforced through the hundreds of McCafés in Italy and some of the stores feature gelato bars.

Local sourcing of ingredients is favoured, which helps their image on a public relations perspective and from a societal marketing concept point of view.

We used the Big Mac Index (BMI) to describe how Rome is priced better than some developing cities and countries but higher than many Western cities. The 2009 BMI suggested that people in Rome need to work for 25 minutes to earn sufficient funds to purchase a big mac. Another January 2013 Economist reference indicated that the Big Mac is priced highest in Italy than in other parts of Europe. 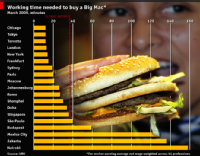 Store locations are consistent with the global approach of obtaining high-traffic, convenient locations. The first store opened in 1986 in the region of the Spanish Steps (under much protest) and sits amongst some luxury brands.

Some 40+ stores are located in the greater Rome area and 450 stores exist in Italy. McDonald's also partnered with Agip (now Eni) to introduce drive through fast food at petrol station locations.

Using their usual model, some stores are company-owned and others are operated by franchisees.

With 527,000 likes and 44,000 people talking about the brand on Facebook, and the 522,000 video views on YouTube, McDonald's is definitely tapping into the consumer base and obtaining feedback and input. Some of the sales promotions feature on those channels (e.g. the Family Meal).

They are also good at maintaining a positive image with the local/governmental authorities through their transparency with regard to corporate social responsibility and green approach. For the families, they have a range of menu items that include fresh fruit and vegetables, such as the cherry tomato side or the kiwi on a stick. The kids also have an option to take part in the Happy Meal Sport Camp, an outdoor activity group encouraging exercise and fun.

McDonald's had to shape the market as similar eating options weren’t popular when they arrived. This required campaigns that appealed to the local teenager and student market, but also on word-of-mouth which is a key social marketing phenomenon in Rome.

In terms of advertising, they created local heroes (who recently appeared at a brand-organised flash mob in the city) through a talent show styled series of commercials. For the tourist market, they also rely on international advertising and brand awareness.

We made a few suggestions but the key one was the idea that they could sponsor tourist maps that showed the locations of the restaurants. By placing city maps in hostels, hotels, airports and bars, tourists could easily identify where the closest McDonald's restaurant is, while navigating their way around the famous landmarks.

A second suggestion that stood out was to conduct a trial of a delivery service (possibly in conjunction with a mobile phone application for order capture) to local universities and hotels.

Delivery of the presentation

We were called first. It was the second time in the week of case studies that we had to present ahead of the other six groups. The advantage though, is that we could relax afterwards and watch the other groups in action without stressing about our turn.

Feedback from the group

We caught the audience by surprise. Many mentioned that they were surprised we had chosen an international brand as opposed to an Italian one.

The feedback received from Prof Harris was valid and allows us to see where some bad decisions were made in the compilation process, or where we had simply forgotten to include some concepts. For starters, we should have discussed the extended marketing mix - all 7 Ps (which includes People, Process and Physical Evidence). Since McDonald's has a clearly consistent process in their stores (the eat-in experience, the counter order taking service) this should have been highlighted and compared with Italian expectations and concerns.

Likewise, People is a reference factor as the staff in these stores and the franchise owners are what make the process run smoothly. The other aspect – Physical Evidence (or environment) – is that some of the stores incorporate the essence of Rome (and Italy) by way of buildings, location, and atmosphere or store fittings.

McDonald's has succeeded in combating (and possibly incorporating) the Slow Food Movement by creating a ‘Cool place to hang out’. The décor is also unique. The store at the Spanish Steps is featured in YouTube videos taken by customers that show off the marble steps and large paintings. The Milan store in Galleria Vittorio Emanuele II incorporated the grand colour scheme of its surroundings (before it was forced to close).

Reflection on the process

In hindsight (which really is a wonderful thing), we should have covered all 7 Ps. Our fault was based on our focus to limit the number of slides, which allowed us to convince ourselves that the other Ps were embedded within the first four.

Overall, the experience was very rewarding. Working with the group, learning from each other and obtaining useful feedback were positive factors. Watching and interacting with the other groups (including the case study sessions) also gave me more of an appreciation for some of the brands out there, including Bulgari, AS Roma, Baffetto Italian Restaurant, Munster Rugby Club, Burberry and Xerox.