Who’s that girl? A burial pithos from Thebes, by Dr Paul Grigsby

In 1966, construction workers in the Boeotian city of Thebes discovered a unique burial pithos dating to the end of the eighth century BC containing the remains of a child. 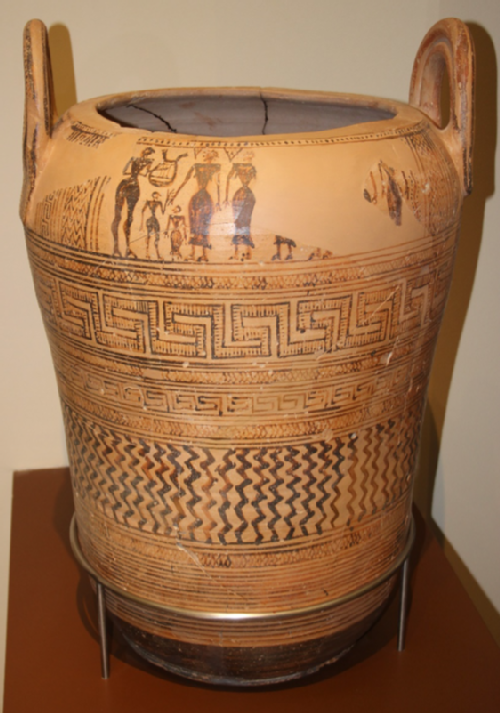 Now in the Archaeological Museum at Thebes, this Late Geometric pithos, standing 50cm tall, depicts an elaborate scene running around its top - an unknown ritual of a maiden chorus led by a lyre. In what was clearly the dominant panel, the most interesting and arguably important figures are a small boy and even smaller girl facing each other, a brother and sister perhaps, flanked by adults – the male lyre-player behind the boy, and a line of six long-skirted females behind the girl, with the boy apparently reaching up to hold the hand of the first woman in line. Around the back a solitary woman on the right faces a line of eight women, much like that on the front.

Together with the pithos, other goods found in the grave included a kalathiskos, a sometimes-votive ceramic vessel modelled on a wool basket and often associated with female deities, suggesting that the child inside the pithos had been a girl, perhaps even the very diminutive figure gracing the central panel of the pithos itself. To understand who this tiny figure may have been, it would help to identify the ritual depicted, and our best guess for this is the Theban Daphnephoria.

At its very simplest, the Daphnephoria involved the bringing of sacred laurel to the Sanctuary of Apollo Ismenios (named for the nearby river Ismenos) which stood on a small hill just to the south of Thebes outside the city wall. 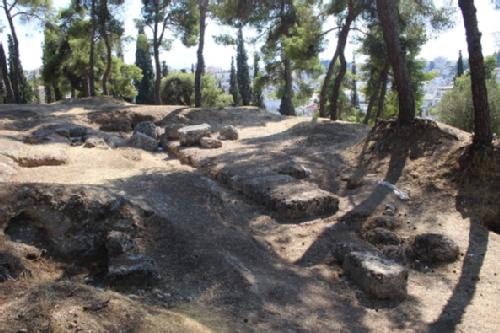 The Theban Daphnephoria is known from a number of late sources, namely Pausanias in the second century AD and Proclus’ Chrestomathia in the fifth century AD. At least three of Pindar’s Partheneia or Maiden Songs (fr. 94a-c), known from a papyrus published in 1904, are speculated to have accompanied the ritual, of which the Daphnephorikon for Agasikles (fr.94b) - so named by Grenfell and Hunt - is the most detailed. But with a millennium between Pindar and Proclus, variations between the rituals as described are many and may reflect inconsistencies in the accounts, differences of authorial focus, the changing of the rite over time, or the description of a completely different rite altogether; take your pick.

Inconsistencies aside, the rituals that these three authors describe nevertheless seem to be related. Pausanias (9.10.4) tells us that in a custom still, to his knowledge, carried out in Thebes in his day, ‘a boy of noble family, who is himself both handsome and strong, is chosen priest of Ismenian Apollo for a year. He is called daphnephoros, for the boys wear wreaths of laurel leaves.’ He goes on to record that the wealthier boys left a tripod as dedication, and that he himself saw the tripod left by Amphitryon for Heracles after he had worn the laurel.

Proclus’ account is by far the most detailed, explaining how ‘every nine years in Boeotia the laurel is brought by priests into the temple of Apollo, it is sung out by a chorus of maidens. A child with both parents still living [pais amphithales] leads the Daphnephoria; his closest relative holds up the wreathed log, which they call the kopo. And the daphnephoros himself follows, holding onto the laurel, his hair flowing freely, wearing a golden crown and adorned in bright garments down to his feet which are bound in Epikratides [sandals] … The chorus of maidens follow close behind him, holding outstretched branches in supplication, and singing the hymn.’

The kopo that Proclus describes is an elaborate ornamented log wrapped with flowers and hung with bronze spheres, not mentioned in either Pindar or Pausanias. With the kopo we assume a late elaboration, and the same might be said of Proclus’ other details missing from Pausanias’ brief account and the hymns of Pindar. In Pindar, the participants of the ritual are not clearly comprehensible given the fragmentary state of the text, but the similarity of each of these rites to another laurel-carrying ritual linked to Apollo, the Septerion at Delphi, ought to remind us of what lay at the heart of the Theban Daphnephoria.

Give the boy a big hand

Elaborations aside, both the Theban and Delphic rituals centred on the carrying of a branch of laurel by a young boy to a Sanctuary of Apollo. With that in mind, the unknown ritual on the Pyri pithos might well be imagined to be of this kind. If so, it would be the earliest evidence of Apollo Ismenios’ cult in Thebes by quite some way. A number of inscriptions relating to the cult have been dated to the sixth century BC, but the cult might be placed further back (to ca. 720-700 BC) if the Pyri pithos indeed shows the celebration of an Apolline Daphnephoria. Langdon suggests as much, recognising an early Apolline rite courtesy of the familiar figures of the boy and girl, maiden chorus and lyre, but whereas she sees no laurel being carried – ‘the pithos does not, of course, illustrate a Pindaric daphnephorikon, for it clearly lacks both laurel branch and decorated log’ (2001, 596) - I would argue that the boy’s raised hand is not simply large and crudely drawn but represents the branch itself. 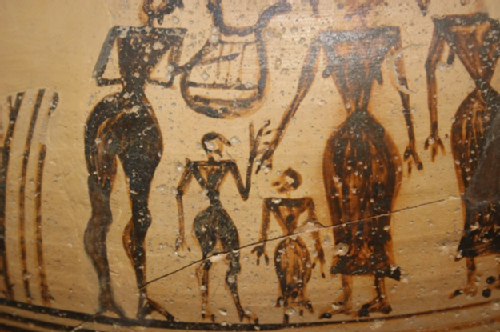 In ancient Greece it is almost always about the boy. Proclus describes the Daphnephorikon as a type of Partheneia or maiden-song, sung by a chorus of girls usually accompanied by pipes, and which ‘praised men and gods alike’ – with an emphasis on the men. The Daphnephorikon for Agasikles (fr.94b) is no exception, praising a boy – Agasikles (possibly, though not unquestionably, the daphnephoros)– and his family, the well-respected family of Aioladas. As the maiden chorus sings (fr.94b trans. Race):

So much for the boy. But what of the girl? We have to wait, but from line 67 we have a fragmented passage which reads:

The relationships are confused. Who is Damaina? Who is leading the way? Where is the daphnephoros? Is he Agasikles, or the girl’s father? But the kindly daughter, first to follow beside the well-leafed laurel, is suggestive enough of the little girl on the Pyri pithos standing beside her laurel-bearing brother to imagine some kind of link.

Looking again at the pithos what can we now say about its small occupant? It is tempting to see in its decoration a nod to the girl buried within. If so, she would have been an earlier version of Pindar’s ‘kindly daughter’, a girl from one of Thebes’ most prominent families, here shown enjoying her role leading the maiden chorus on her brother’s big day as daphnephoros; unaware, we hope, that her days in the sun were numbered and that this special occasion would soon decorate the sides of her burial jar and tell us something about her short but exciting life over two thousand years later. 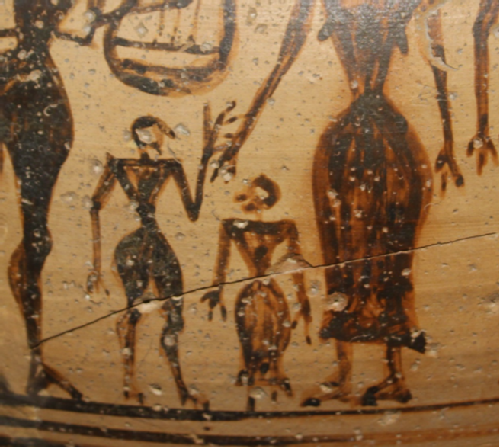 Boutsikas, E. (2015). Landscape and the Cosmos in the Apolline Rites of Delphi, Delos and Dreros. In L. Käppel , & V. Pothou (Eds.), Human Development in Sacred Landscapes: Between Ritual Tradition, Creativity and Emotionality (pp. 77-102).

Schachter, A. (1981). Cults of Boiotia:1. Acheloos to Hera. London: Institute of Classical Studies.