I first encountered the goddess Senuna in 2019 when researching for an epigraphy module essay for my MA here at Warwick. Although Senuna only had a brief mention therein, I intended to discover more about her and the Ashwell Hoard when time allowed. However, dissertation work and starting on PhD research meant that Senuna was forgotten, that is until later in 2019, I changed my volunteering role at the British Museum to become a tour guide. Luckily, there was a space on the rota for my first choice of eye-opener tour, “Gods and Goddesses of Roman Britain”, and when I started training, lo and behold, there was Senuna, and the Ashwell Hoard in all its glory, as the penultimate stop on the tour! So, happily we met again, but only briefly as Covid-19 struck, and my last tour was on 16 March 2020.

Given the recent amazing archaeological finds such as the Iliad mosaic at Rutland, the figural sculptures from Stoke Mandeville and most recently the wooden figurine from Twyford, I was reminded again of Senuna and the Ashwell Hoard. It was a similarly remarkable discovery in 2002 made by a metal detectorist, as before this, no one had heard of Senuna. She was then a newly discovered, previously unknown Romano-British goddess. So, I thought I’d take the chance to revisit Senuna and finally indulge my curiosity a little by using her as the basis for this article. 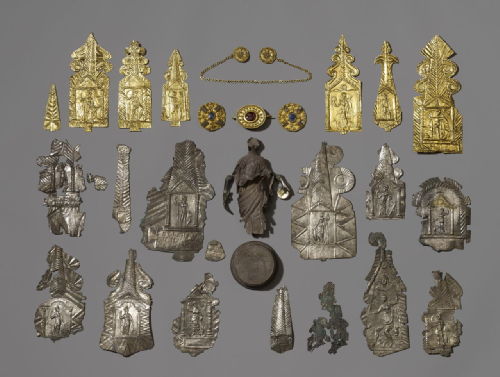 The Ashwell Hoard consists of ca. 20 gold and silver votive plaques, a statuette and base, and a suite of gold jewellery. Its discovery in 2002 in a field at Ashwell, near Baldock in Hertfordshire, was followed by acquisition by the British Museum in 2003 and intense conservation work before it went on display in Gallery 49. The hoard is understood as a “structured deposit” which means it was placed into the ground in an ordered way: the statuette had been placed on top of the jewellery and arms of the statuette, with the gold plaques stacked underneath, followed by the silver plaques. Dating of the objects is difficult but there are indicators that the plaques may date to the 1st to 2nd centuries CE, and the jewellery to the 2nd or 3rd century CE, whilst the deposition of the hoard is indicated to have been in the 3rd or 4th century CE. No container was found, although three iron nails were found alongside the hoard, but during conservation the remains of preserved textile (from lime tree bast fibres) were discovered, suggesting that the hoard may have been buried inside a fabric bag. It is also possible that it had been concealed by religious officiates for safekeeping, who intended to return to retrieve it, given the similarities to other hoards found in the wider geographic area (Stony Stratford and Barkway hoards).

The votive plaques, which would have originally been set up in a temple or shrine, have punch dot inscriptions. Radiography was used to clarify these and to allow the Latin to be read, although they were very difficult to decipher due to abbreviations, idiosyncratic language, and use of ligatures, as well as the variable density of the dots making the individual letters difficult to distinguish. The female goddess whose image appears on a number of the plaques appears as Minerva, but none of the inscriptions on the plaques confirmed this. Instead, they named Senuna, or Senua or Sena. In total, nine of the votive plaques have inscriptions dedicating them to this deity, with the dedicants being both male and female.

During a later excavation of the hoard’s findspot, the statuette’s inscribed pedestal base was discovered nearby. This named Senuna clearly, confirming her name and that the statuette was intended as a representation of her, although it does not have any specific attributes which identify or differentiate her from other deities. The hollow silver gilt figurine is badly deteriorated, damaged, and very fragile due to the very thin silver sheet it is made from, although the arms associated with the figurine are more robust as they are solid castings. However, the statuette is an extremely significant object from Roman Britain, as there are only two other known silver figurines of deities, one of which is unfortunately now lost. The figurine is draped in a full-length garment which leaves her left shoulder bare, whilst the back shows her hair is centrally parted on the crown, with a bun at the nape of her neck. The inscription on the base reads:

To the goddess Senuna, Flavia Cunoris has paid her vow willingly, deservedly

This shows that the statuette was dedicated by a woman named Flavia Cunoris, and although we know nothing more about her other than this dedication, her name has been shown to be a Celtic compound, the first part of which was commonly found in Britain, suggesting she was probably a native Britain.

Senuna is thought to potentially have been a local deity connected to water, and the Ashwell spring near to the hoard’s findspot is likely to have been significant to local people both in pre-Roman and Roman times. There was also a river named Senua somewhere in southern England. Senuna probably shared some attributes of Minerva, given Minerva’s iconography appears on the votive plaques, and this may well have included healing or an association with water as these were both associated with Minerva. This is supported by Minerva’s conflation with Sulis at Bath (Aquae Sulis) and her role there as goddess of the thermal sacred spring. However, it is worth noting also that the right hand of the statuette holds a pair of corn ears, which are attributes of Roman Ceres and Fortuna, who are associated with agriculture and fertility, and therefore it seems likely that Senuna also had these connotations. Furthermore, it is possible that she was related to the Celtic goddess Sena “the Old” for whom there is epigraphic evidence from Gaul, Noricum and Spain.

One of the most wonderful things about the ancient world is new discoveries which shed light on hitherto unknown elements of people’s lives. The discovery of the Ashwell Hoard did exactly that – it introduced us to the worship of the goddess Senuna – and it is a fantastic example of something we didn’t previously have any evidence for. It is exciting to think how many more amazing artefacts are still to be found and what they may be able to tell us. If you would like to see the Ashwell Hoard, and the objects described above, they are on display in Gallery 49 on the upper floor of The British Museum. The eye opener tours have started again, with the “Gods and Goddesses of Roman Britain” tour having just restarted on Monday 24th January 2022.