Queen Elizabeth’s platinum jubilee was a great opportunity to celebrate her wonderful achievement, and allowed us to glimpse the royal family during events that, although highly choreographed, were often less formal. We saw, at times, a more casual side to the family, especially the children. As the celebrations drew to a close, I wondered how an empress of Rome would have appeared in celebration. Alas for me, none of the empresses I am researching ever came close to celebrating a jubilee, let alone a platinum one! However, there is one empress who can give us a glimpse of an imperial celebration: the little known Magnia Urbica.

Magnia Urbica was a ‘Soldier Empress’ - these are a relatively understudied group of empresses who ruled between 235 CE and 285 CE. Magnia Urbica was the last empress in this group, she reigned between August 283 CE and August 285 CE and was married to Carinus, a ‘Soldier Emperor or Barracks Emperor’. Together they represent the last of their kind, at the end of an era. 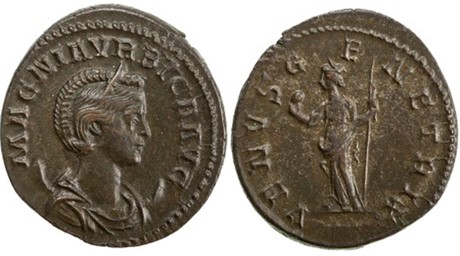 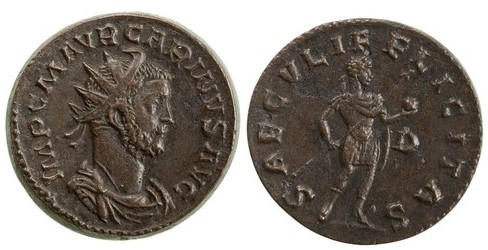 Compared to the famous emperors of imperial Rome, little is known of the Soldier Emperors, and even less about their wives. Like most Soldier Empresses, Magnia Urbica was not mentioned by any ancient historian, we only know her through inscriptions and coins. Her husband, Carinus, was the last of a trio of short reigning, unsuccessful emperors: Carinus, his younger brother Numerian and their father Carus. The emperor Carus died, if you believe the myth, by being struck by lightning in his tent. More probably he was struck by his brother-in-law Aper, who also murdered Numerian soon after. In a tale that borders on comical, Aper, hid the death of Numerian by having the emperor’s body carried around in a litter and claiming the emperor was too ill to see anybody, until inevitably, the smell alerted those nearby to what had happened. Aper was then killed by Valerius Diocles, who after being proclaimed emperor changed his name to Diocletian. A few months later Carinus was betrayed and killed by his own men, leaving Diocletian the undisputed ruler of the Roman world. With Diocletian came a new era for Rome: the rule of four emperors, the tetrarchy, would transform the empire and within a century would also become a Christian Roman Empire. Given the negative impression of Magnia Urbica’s family, especially compared to Diocletian, it is easy to see why she gets overlooked.

So, who was Magnia Urbica? Sadly, there are few clues as the ancient patriarchy was adept at filtering out or distorting the women of the ancient world. Coins provide the majority of the surviving evidence for her, and like previous Roman empresses, Magnia Urbica is mostly depicted in the traditional and often drab motifs used by her predecessors. Her portraits on coins are not an accurate representation of her appearance but are instead a feminised version of the emperor’s own image (compare Figs 1 and 2). The differences between the images follow the same standard changes adopted by her third century predecessors: her hair is in the fashionable Scheitelzopffrisur style, she wears a diadem, and she is dressed in the traditional palla. Beyond her portrait, the images and inscriptions on the reverse of her coins also represent Magnia Urbica with similar values to the other Soldier Empresses and even the powerful empresses of the second century. She was the last empress to be represented alongside Juno Regina, queen of the gods. Magnia Urbica was linked to the famous empresses of the second century, such as Faustina the Younger (the daughter of the emperor Antonninus Pius and wife of the emperor Marcus Aurelius), by having coins made with similar imagery, such as Venus Victrix (see Figs 3 and 4). 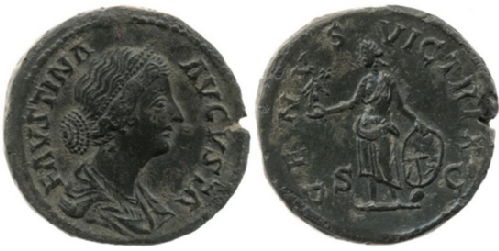 Nonetheless, Magnia Urbica was not always represented in such a traditional manner, and was also depicted in new and more interesting forms. None is more striking than the coins struck in the northern Italian mint of Ticinum, modern Pavia, which depict her wearing an unusually elaborate, embroidered costume which has often been identified as a trabea. She is also wearing elaborate jewellery: a double rowed pearl necklace with joining jewels (Fig 4). 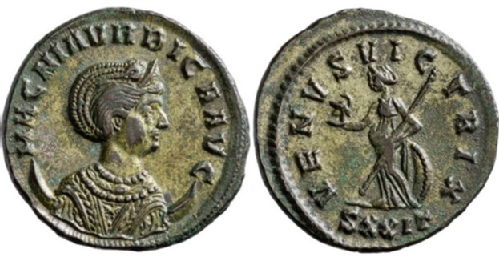 The trabea, or trabea triumphalis is also known as the toga picta. It is a decorated garment, often made with purple cloth and gold thread, worn by emperors, consuls and generals during a triumph. The suggestion that Magnia Urbica is wearing a trabea is controversial as it is considered to only have been worn by men. Nonetheless, the costume of Magnia Urbica shows remarkable similarities to images portraying the trabea,e.g. the ivory diptych of the consul Anastasius, and coins of the emperor Diocletian wearing a trabea triumphalis (Figs 5 and 6). If Magnia Urbica is not wearing a trabea, then it is of a very similar design, perhaps deliberately so.

Fig 5: Ivory diptych of the Consul Anastasius, object no.O93125; courtesy of the © Victoria and Albert Museum.

Why Magnia Urbica is illustrated wearing this outfit remains open to debate, but all the theories suggest she is celebrating an important event: possibly her wedding as she may have married Carinus in or around Ticinum in 283 CE, or she could be celebrating her coronation as empress, which once again may have happened in northern Italy. The third theory is that she is celebrating a major military victory. Either way her husband, Carinus, is not depicted wearing a trabea or special outfit which makes its representation on Magnia Urbica all the more curious.

Although the nature of this celebration and her choice of costume may never be known, Magnia Urbica’s innovation did not end with her short reign. Many later empresses like Galeria Valeria, Helena and Fausta are depicted wearing similarly elaborate costumes and jewellery (Fig 7) suggesting that Magnia Urbica began a new trend, one that appears more vibrant and celebratory. 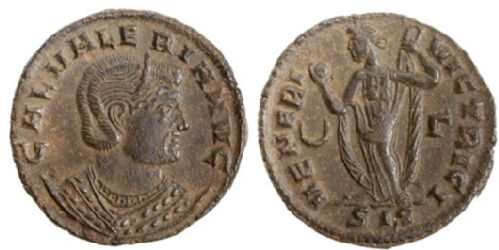 In fact, over the centuries that followed Magnia Urbica the appearance of empresses in elaborate costumes increases; the trabea triumphalis also evolved into the Byzantine loros,often depicted being worn by some Byzantine empresses, as well as emperors. These Byzantine empresses are often depicted in an elaborate loros and fine jewellery. Indeed, the bejewelled double pearl necklace worn by Magnia Urbica also bears a striking similarity to the necklace worn by the famous sixth century Byzantine empress Theodora, on the panel in the Basilica di San Vitale in Ravenna (Fig 8). The mosaic of Theodora helps us to take Magnia Urbica outside of the monochrome world of coins and into the vibrant world of colour. The added colour also allows us to get a little closer to the human side of Magnia Urbica and the world she inhabited and to get an idea of what she may have looked like during the imperial celebrations. 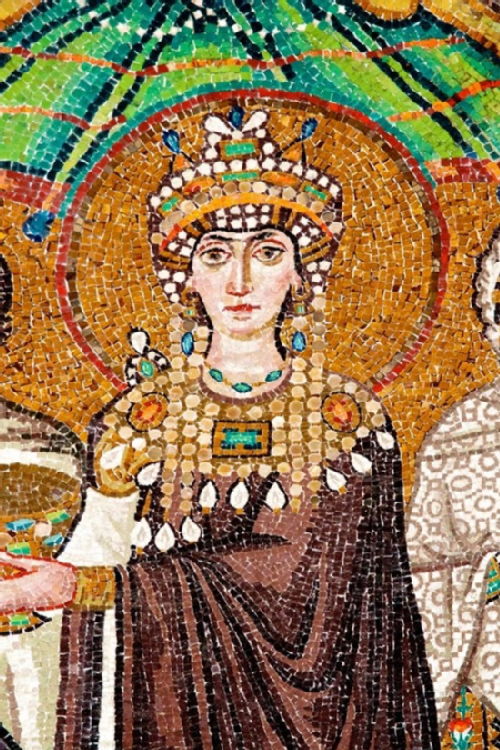 Fig 8: Mosaic in situ in the Basilica di San Vitale, Ravenna. Theodora wearing a white chalmys, on top of a purple robe and ornate jewellery, including a pearl necklace, earrings and crown. Creative Commons CC BY-NC-SA 2.0

Magnia Urbica was often represented as an archetypal empress of ancient Rome and it can be hard to see past her static, colourless images, with her stern face and traditional clothing. Yet, as with the Queen’s platinum jubilee, celebrations can become a window through which we can glimpse a different side of those whose public images are necessarily filtered. As Magnia Urbica demonstrates, an empress can be represented traditionally and innovatively. She was part of a long lineage of empresses emerging from the early days of empire. Through her triumphs and celebrations, she created both new traditions to be copied by later empresses, and an opportunity to glimpse a more human side to an empress of Rome.

Ricciardi, R. (2008) Where did all the Women go: The Archaeology of the Soldier Empresses (Cincinnati: Cincinnati University Press)