Twice recently, the journalist Johann Hari has suggested that we are going through a manufactured crisis. The history of Britain's public debt, he argues, show that present levels are modest and there is no need for precipitate action to restrain government spending:

Here’s the lie. We are in a debt crisis. Our national debt is dangerously and historically high. We are being threatened by the international bond markets. The way out is to eradicate our deficit rapidly. Only that will restore “confidence”, and therefore economic growth. Every step of this program is false, and endangers you.

Let’s start with a fact that should be on billboards across the land. As a proportion of GDP, Britain’s national debt has been higher than it is now for 200 of the past 250 years.

The quote is from Johann Hari's blog, The biggest lie in British politics(March 29, 2011). Before that, in When will David Cameron's soufflé of spin collapse?(February 11, 2011) Hari wrote:

Beneath Cameron's entire agenda runs the biggest lie of all: that Britain is facing an "unprecedented" level of debt. In reality, Britain's national debt has been higher as a proportion of GDP for 200 of the past 250 years.

The full argument, widely blogged and tweeted, goes like this:

On a closer look, this line of reasoning raises interesting issues. Here is a chart that shows the evolution of Britain's public debt as a percent of national income since 1692: 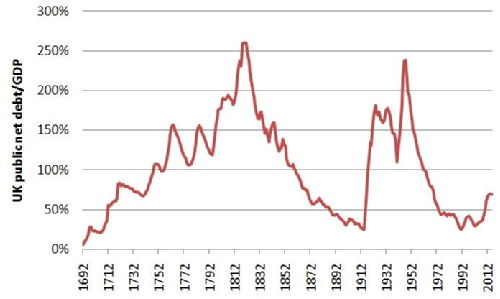 Next, is there anything else of interest in these figures? Well, since the level of debt today is the sum of past changes, we could also look at the rate of change of Britain’s public debt. Interestingly, there have been just 36 years in the last 320 when the debt grew faster as a percent of GDP than in 2009 to 2011. Let me give some twentieth century examples, and you'll get the idea. One run of years when the public debt climbed faster was 1915 to 1919. Another was 1941 to 1946.

In other words, Britain's debt has been growing in the last couple of years at rates generally exceeded only in major wars. It's particularly dangerous because, as I explained here, debt has persistence. Once the conditions have been created for it to grow rapidly, it'll go on rising under its own momentum until you take steps to control it. The longer you leave it, the harder it gets.

In some general sense, however, Hari has a point. It's true that Britain’s debt has been higher than it is now for more than two of the last three centuries. He overstates the case, which I dislike, but I accept that most policy advocates do that most of the time, and they can't all be wrong at once.

Now, some economic history. My point here is that there are important reasons why Britain today cannot handle the 200% plus debt ratios that characterized the 1820s (after the Wars of the Austrian and Spanish Successions, the Seven Years' War, and the Napoleonic Wars) and the 1950s (after World Wars I and II). If much higher debt levels were okay then, why not now? The answer begins with: because times have changed. We no longer live in the 1820s or the 1950s. It’s the twenty-first century.

How did Britain sustain that kind of debt in the past? Well, how do you handle a debt that is twice your income? The important thing is that you have to be able somehow to limit the interest payments. If debt is twice national income, as long as you can borrow at no more than 3%, you have to transfer only 6% of national income each year to bond holders. But, if the interest rate goes up to 12.5% (as it is today for Greece and Ireland) then the transfer eventually goes up to an infeasible 25% of national income. Basically, you’re insolvent.

How do you keep the interest rate down to 3%? In one of two ways. Either you dominate the world capital market – as Britain did in the eighteenth and nineteenth centuries. Or, you close the domestic capital market off from the world, so you can dominate your own little pool of saving – as Britain did in the mid-twentieth century. Either way, you can borrow if there's no one else for people to lend to.

In the eighteenth and nineteenth centuries, Britain could handle a much higher debt ratio than today’s because an integrated global capital market developed in which the British economy was the major borrower and lender. There was little credible competition with British bonds. As a result, British public debt remained universally acceptable despite its relative abundance. (The United States has enjoyed a similar position since World War II, but the uncontrolled U.S. budget deficit may eventually put an end to that.)

Before the twentieth century, moreover, the British government did not have major commitments to social spending at home. The spending of the central government was principally on administration and defence. As a use of government revenue, interest payments did not have to compete with major entitlement claims. This kept government guarantees of repayment credible.

The two world wars broke up the global capital market. Although no longer the world's financier, in the mid-twentieth century Britain could continue to handle a much higher debt ratio than today’s for a reason that was completely different from before. In a closed domestic capital market, British bonds were protected from competition. British lenders could not freely buy the bonds of other countries, even if they wanted to, because of government controls on foreign exchange and capital movements. With alternatives kept out of the market, British public debt continued to be acceptable at home.

Today, these conditions have gone. There is a global capital market again. British bonds have no specific advantage for foreign lenders (as they had in the eighteenth and nineteenth centuries), and domestic lenders can pick and choose among bonds issued by many countries (something they could not do in the middle of the twentieth century).

This is why a level of debt that was sustainable decades or centuries ago is not sustainable today. Today, no one has to lend to the British government for lack of alternatives. In short, whether or not it is true, it is irrelevant that "Britain’s national debt has been higher than it is now for 200 of the past 250 years." The conditions of those 200 years have gone.

Here is the first reason why it is important for the British government to control the level of public debt: the day of reckoning would be upon us if we didn't. A combination of rising debt, declining confidence, and rising interest rates would then force us to close the budget deficit even faster than planned at present. The world doesn't owe us a living; we already owe them. In fact, don't feel sorry for us; feel sorry for Americans that the U.S. Treasury has enough discretion to put off its day of reckoning until the fiscal mess there will be still more dire than it is now.

The world has changed; for Britain, has it changed for better or worse? Some people might think "for worse." There are those that don't like globalization on principle; others might wonder, more pragmatically, whether the conditions of the capital market half a century ago could be restored. Talk of capital controls is in the air again. If capital account liberalization made it more difficult for us to carry on with deficit spending and a rising public debt, then why not restore the protected capital market regime of the 1950s?

The case might be that, by restricting the choices of British lenders again, we could increase the domestic demand for British debt. (By the same token, however, we would also eliminate the foreign demand.) On closer inspection, this course of action hardly recommends itself. When lenders lose the will to lend, as with Greece, Ireland, and Portugal, it is usually for good reason. Taking away their option to buy elsewhere would amount to sticking fingers in our ears so as not to hear bad news.

Besides, if we restored the conditions that enabled the government to borrow more than twice GDP, what reason is there to suppose that the government would make better use of the money than private borrowers? Still one of the richest countries in the world, Britain’s prosperity has come from private enterprise and innovation, industrial and commercial revolution, and trade and finance; it did not come from Whitehall.

To finish up, the second reason for fixing Britain's debt while it is still at today's historically "modest" level is that having a debt twice your income is a sign that something went terribly wrong; a run of major wars, for example. Faced with the worst recession in 80 years, the British government was right to let its budget go into deficit temporarily. At that moment an increase in Britain's debt was inevitable. Now it's right to bring it back under control over a few years.

So, if the British government today cannot dominate its capital market and continue to eat up national resources beyond the willingness of the population to pay taxes -- there is reason to be glad.