During this session we again split off into our little groups, which for the moment is the most effective way in which to work. Our group took a trip to Homebase to gather materials to use on the collage. We spent the rest of the session nailing a protective plastic layer, and then a cover sheet to one of the flats we wanted to use. We then tried to pinpoint a image/theme that would be central in the collage. We decided on a Greek painting (one similar to that off the cover of Classical Tragedy) that we would place slightly off centre on the collage.
Perhaps something looking similar to this: 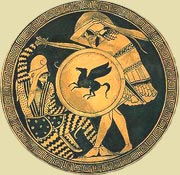 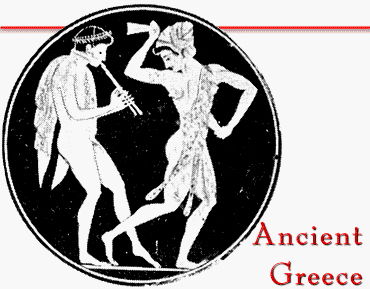 We had the idea of using newspaper clippings to form the border around the painting, the idea being to create a link between the classical (painting) and the contemporary (newspaper clippings). We felt that the rest of the canvas could be made up of materials and images/words that connote whatever we find interesting about gender oppositions. We set ourselves the aim to finish the collage by Friday, and so move onto creating two shadow displays behind the collage. Then once again we each went to do as much research as possible, to gather whatever we could to use on the collage.

Research sites I found useful on the internet:

Other websites I found useful were:

"http://www.bbc.co.uk/history/ancient/greeks/greek_olympics_gallery_06.shtml
This site was interesting as it had lots of interesting stuff about Greek sculpting, as well as beautiful images.

"http://www.hsv.k12.al.us/schools/middle/wtms/student/erika/Clothing.html
I used this website mainly for its Grecian images.

"http://www.quebecoislibre.org/010203–9.htm
This page was pretty anti female and pro male-so it had loads of good quotes that we could incorporate into the collage.

The group has worked really well so far, we are all coming up with some cool ideas, and Im really looking forward to the performance. I have the impression that everyone feels at ease with each other, and that nobody holds back from voicing their ideas or views to the group. This is great, and means we can work so much more productively. I think this piece is going to work really well.

My little group of four plans to meet Tuesday to get started on putting the collage together, I think once we get started things should move pretty quickly.