A fairly comprehensive summary of what I actually saw (not much) while in cologne.
The hotel. Despite my intentions of having a lie in this morning I woke up far too early anyway and so by 10:30 I had been to tesco and got my washing done. Unfortunately now I am feeling really tired again.
The cause of all this is having spent the last week helping a friend with a trade show. Last saturday I was up early as I had to be in Cambridge by 9:30, the aim being to set off from there by 10 headed for Cologne. Unfortunately in a rare attempt to be organised Andre had tried to load the lorry up the night before and managed to drop the robot off the back of the lorry so we had to get a couple of other people over to help right it again. We then had to perform afew minor repairs on the cabinet and check the robot still worked. This took somewhat longer than expected, but after a few calls to the engineer we established that it was working, however one of the axes was now misaligned. after much fiddling we established that by removing 3 of the 4 bolts fixing the robot to the base we could rotate it slightly so that the demonstration would work (though not quite as smoothly as before) so we finally managed to get the Robot loaded on the lorry and set off just before 2,nearly 4 hours behind schedule.
The journey there was realtively event free, down to Dover and then only a brief wait for a ferry over to Calais.
Wegot slightly lost going round Brussels (missed the turning off the ring road) We stopped off in Liege and eventually managed to find a hotel for the night ~11pm.
Sunday morning was an early start to get to the Kolnmeser by 10:30am to set up the stand. By 7pm we had finally got everything set up and working . 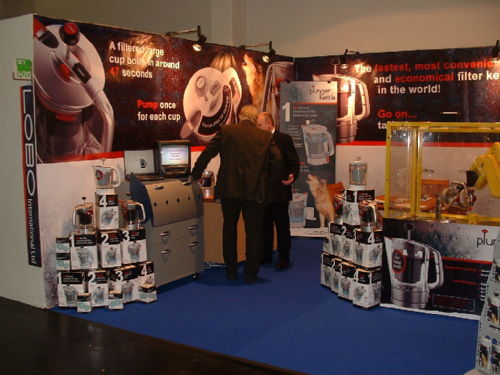 Monday to thursday we were manning the stand 9–6. Most of the other exhibitors were complaining how quiet the show was, however we were fairly busy much of the time and had loads of interest (including from the chinese who wer very persistent trying to get hold of a sample so they could attempt to copy it. ) Fortunately packing away is a lot quicker than setting up so by 7:30pm on thursday we had everything loaded up in the lorry ready to leave first thing Friday.

The journey back was far less pleasant. It was quite bright when we set off ~9am from cologne but rather windy. Andre drove the first little bit, ignoring the signs forbidding lorries overtaking through the roadworks, resulting in being rather too close to the barrier for my liking. I heard us touch at one point, when we stopped for a coffee we discovered that he had clipped the control box for the tail liftso it was now hanging from its wires. After that I ytook over the driving to CalaisThe wind was supplemented by loads of driving rain, which was worse on the busuiest stretch round Brussels which slowed us down considerably. At Calais we stopped off to stock up on a few case of wine before gettting the Ferry. We hit rush hour traffic on the M25 and didn't reach cambridge till after 6. By now we are quite practiced at shifting the robot so it only took us 1/2 hour to get it out of the hired truck and back into Andre's broken down truck, after which I shot off leaving Andre to unload everything else.
I stopped of at my parents in Kettering on the way back for some food and see them before they dissapear off to Austrlia for 6 weeks on Monday. Eventually got home just after 10 last night, 13 hours after setting off from Cologne.

Visit to the vets

This morning was Kelvin's annual visit to the vets, scheduled for 9:00 as I can usually guarantee to find him at that time of day.
First problem is getting him into his carrier, one of those cheap collabsible ones as it folds down flat out the way for the remaining 364.9 days of the year. I managed after only 4 attemptsto get him in and the lid secured. Unfortunately Jlast night I had to park half way down the road, just as I was about to put him in the car he somehow managed with all his struggling to get the bottom to open out and he escaped. Fortunately he is fairly stupid and followed me all the way back to the house, not quite so stupid as to follow me in, but that was soon fixed by showing him his fish toy.
After a few quick repairs to the box and strengthening the bottom followed several more attempts to get him in, unfortunately with his persistence he was managing to slowly destroy the carrier and I couldn't find my Gaffer tape so plan B. At this point Kelvin thought he had won (but was a bit miifffed that he still couldn't get out the cat flap.Phoned the Vets to postpone the appointment and a quick trip to Pets at home to purchase a solid carrier. Loooking at the options one which had the option of top as well as front loading loked like a good idea, except the roof was wire as well so there looked like a high likelihood he would be able to scrtach me when I tried to pick him up so I opted for the solid roofed front loading only option.
On my return home Kelvin eyed this new contraption suspiciously and then tried another escape though the catflap before reluctantly alllowing me to pick him up. I managed to get him half in before he realised hs mistake, by which time it was too lat, though he did try and scratch me as I fastened the door.
After a wait to see the vet , his turn came, surprise surprise now he tried to hide at the back of the carrier but lost his valiant attempt to remain inside. I don't bother with the full health check, much to the vets delight, as he doesn't remain cooperative enough for them to do it, a quick worming tablet down his neck before he realises and a struggle to hold him down for the injection before forcing him back into the carrier.
He's now back at home sulking, but safe for another year from having to go to the Vets.