I’m quite keen on my orange squash as most of you know. Those of you who know me well will also know my particular fondness of Robinson’s Orange Squash.

Recently they have changed their label from the one in the photo. Why change a label? To attract attention to the product to re-promote it? To accompany a change in flavour or ingredients?

My guess is the latter because it is now necessary to dilute the cordial in slightly different proportions in order to remove the slight aftertaste of pinapple that is otherwise noticable. When I first tried the ‘new’ orange squash I thought I’d picked up the wrong bottle from the supermarket as Robinson’s do indeed sell an orange and pinapple version….

Anyway, I checked and I definitely have the orange (no added sugar) squash and with a little bit of experimentation as to proportions of cordial to water it’s all sorted.

The point of this entry….. none really other than to fill time and hopefully keep you amused for all of 2 minutes!!

Follow-up to The joys of LaTeX from Laura's blog

Thank you for your help if you commented on my first entry about Latex and graphics. I’m still stuck I’m afriad. I’ve converted the image to a .pdf and then written \usepackages{graphicx} at the top and then typed \includegraphics{Normalisedzscores.pdf}

When I did this to start with, it said it needed to know the dimension of the bounding box so I altered it to \includegraphics[bb = 4 4 5 5]{Normalisedzscores.pdf} which runs fine, but in DVi I get the following error message:

Any ideas? Thank you for your help.

P.S. Apologies to anyone reading my blog hoping for something exciting!

The joys of LaTeX

Last year I wrote my dissertation in TeX. This was a major faff as I was incapable of making contents pages and bibliographies in it. Therefore I’ve decided to learn how to use LaTeX. So far, it’s great! I’ve worked out contents and bibiliographies without any bother and can do tables and everything I need. However, graphics seem to be beyond me! I’ve got the graphics saved as .wmf as they were what I needed for TeX, however, it seems that these are unsuitable for LaTeX. Equally, I’ve tried converting them to .jpg and .pdf and using pdflatex in the latter case, but it still won’t put graphics into my document.

Any ideas?! Thank you.

All but a very few, select soft toys have been taken from me :-(

Apparently, because I’m 21 and want to be treated like an adult, I have to act like one. It appears that in order to act like an adult you have to be parted from nearly 100 soft toys and redesign your room so that it looks like a room in a show house and not like a room anyone lives in.

At least my 30 favourites are safe (currently in a box waiting to go back to university which isn’t great, but at least they’ve avoided being sold.)

Number 0 in the queue

Today I had the most comedy phone conversation ever. I dialled the relevant number and after two rings, a voice announced “I’m sorry all our operators are busy at present. Please hold until the next available member of staff becomes available. You are number zero in the queue.” This is itself is amusing as how is it possible to have an empty queue? Also, if I’m in an empty queue why is noone answering the phone?!

A few minutes later my call was answered. The helpdesk I was ringing is one which sorts all things technology based. Consequently I was very surprised when they said they weren’t reading emails today. (I sent them an email initially to explain the problems as that’s what I was told to do when I rang them the first time.)

I was even more surprised when I had to explain their mailing system to them!!!!

It made for a very entertaining phone call that’s for sure!

Why are Sunday evenings so gloomy? I went out for dinner this evening, however, I was home by 9.00 so have had to fill the remaining hours before I can accept defeat and go to bed ready to wake up for another day’s revision.

MSN’s quiet today too, as it is every weekend. I guess people have more of a social life than I do. I finished another book today though and have been watching the snooker, so I can’t grumble too much.

Bank holiday tomorrow. It’s just like a Sunday all over again which isn’t a good thing in my opinion. All of you who work Monday to Friday will no doubt dispute that point, but for someone like me who works everyday, Bank holidays are just another reason for places to be shut and people to be busy doing things they want to do as opposed to have to do!

The Future's in Our Hands!

MONDAY 26th February (week 8), 7pm in the Butterworth Hall within Warwick Arts Centre, the University of Warwick Wind Orchestra and massed choir of 250 7-11 children from local schools come together to perform for your entertainment. We will be playing pieces ranging from Hobbits from Lord of the Rings, to a medley of Beatles songs. Other tunes include ‘The Future’s in Our Hands’ featuring the massed choir and Siyahamba as well as My Fair Lady medley, Scramble! by Nigel Hess, Overture to ‘Candide’, Holsts’ first suite in Eb….. Something for everyone!

Tickets are only £3 for concessions, £5 otherwise!

Please come along and support the choir and orchestra in what promises to
be an excellent night’s entertainment for a very reasonable price!

I think the title should actually read, ‘observations’ but nevermind.

Has anyone listened to the Gladiator soundtrack recently? If so, have you noticed the uncanny resemblence of one of the tracks to the Pirates of the Caribbean soundtrack? I know that Klaus Badelt was involved in the score production for Gladiator, but did he really use the same theme in both soundtracks?

A slightly less geeky observation: drinking too much alcohol isn’t good; for the person, the people they are with and the people that are around them. To explain, a party of promers who set up their rug next to our ‘camp’ came dressed in their finery (black ties and silly dresses.) They all then consumed lots of alcohol, but one man in particular became very drunk to the level of almost being unconcious. Personally I can’t see the point, but that is just me.

Thirdly, has anyone noticed how quickly someone can sober up if they need to?

Right, that is enough philosophical views for the time being!

I went on holiday to the Lake District with Mum's Mum, Mum's Mum's Mum and Dad and Tom and Babe and Patch. It was very fun.

Babe, Patch and me were put in charge of choosing all the walks. We walked 26 miles. It was hard work. Here is a picture of me on a walk around a place called Blea Tarn. On 1 of our walks, we saw sheep playing football. You can see the goal keepers in the pictures below. One day we went on a boat. It was very windy and cold and I thought I was going to go for a swim. I have also been on a train. My holiday was very fun. 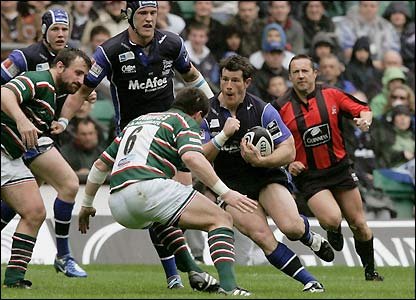 Humph – it is raining, revision is not going well, and to top it all, Leicester Tigers were beaten by Sale in the Premiership final.