The largest religious structure in the world, Angkor Wat is a temple in Siem Reap, Cambodia.

Today, it is a buddhist temple, but it was built in the early 12th century as a Hindu temple. This fact is confirmed by its design; the five central towers and surrounding moat representing the five-peaked Mount Meru, abode of the Hindu gods, and the cosmic ocean.

Remarkably well-preserved despite the years of unrest and the encroaching jungle, Angkor Wat has become a symbol of Cambodia, taking centre place on the national flag. This temple not only impresses with its size and design, but the bas-reliefs covering all four outer walls of the temple and the intricately carved apsaras adorning the inner walls.

The apsaras are celestial dancers who, myth has it, danced for the kings of Cambodia. They are a key feature of many a Cambodian temple. Their presence in a place of worship may seem odd, but considering it represents the abode of the gods, perhaps less so. The apsaras of Angkor Wat are considered the most beautiful due to their slimmer and taller figures and generally complement the magnificence of the structure. The fact that some are carved in enormous single blocks of sandstone adds to the amazement one feels when looking up at Angkor Wat and wondering on the hows and whys of this construction. 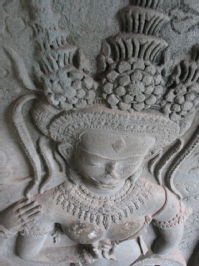