My teacher didn't strike as a particularly enthusiastic reader, aside from finding books to study in class. In this regard, they knew an awful lot of the classic works such as 'Charlotte's Web' and 'The Railway Children'. They didn't know a lot about more recent children's literature, like the Alex Rider series - which were hugely popular in the year six class I was working in!
Having said this, whilst the class were studying 'The Railway Children' as a tie-in between literacy and the Victorian topic work they were doing, the teacher did inspire the children. Almost every one of them ended up loving the book, despite some reservations to begin with. Reading in general in the class though was only present when cihldren had completed their mental maths warm up. It was almost presented as a time filler rather than a pleasurable activity. The importance of being a good reader was present, as they were all told that they would not achieve level 5s in SATs unless they read a lot of the time.
At school level, a similar message was presented. Although children produced some wonderful work using books as a stimulus, it never seemed as though the school suggested reading could be an activity outside learning! Although some of the children independently loved reading, the school ethos was not one that focused on how brilliant reading can be. The most reading-focused person I met in the school was a TA who ran guided reading. They really enthused the children with the idea of books being something amazing that can take you out of this world. Of course, it helped that they were reading Roald Dahl, who is still one of the children's favourite authors.
What really stood out for me was the difference between what boys and girls read. One of the boys told me that he 'only reads things about war and guns and stuff', and it struck me that he is missing out on so much wonderful literature! During one PE lesson when he had forgotten his kit, I took him into the library and showed him some books he hadn't considered. One particular series I introduced him to was the 'Artemis fowl' series, which is a good crossover book that both boys and girls seem to love.
My other favourite moment was when I accompanied Key Stage 1 and Foundation Stage on a trip to see 'The Tiger Who Came To Tea' at Warwick Arts Centre. It was absolutely brilliant! The children all got really engaged with the text through the play, and were joining in at all the right moments. They were enthralled by some of the special effects that were used to have the tiger eating all the buns and sandwiches from tea. It was a really good way to bring the children into the text in a more imaginative way. I read this book to a year 2 class, who absolutely loved it. I would say it is appropriate for any KS1 class, but it worked particularly well with this age group. I chose to read it partly because it fitted in nicely with the PSHE topic of feelings and helping people, but mostly because it is an enjoably book! Also, it is written by Julia Donaldson who wrote 'The Gruffalo', so I knew it was likely to be well written. It follows the trials of George who is the scruffiest giant in town. He then buys some smart clothes to feel better, but ends up giving away various items to help animals. As in most books for children it all ends happily, with him back in his comfy and familiar clothes and with a golden crown given to him by all those he has helped. 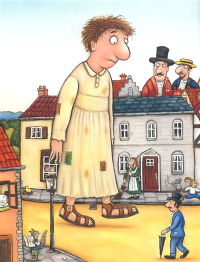 To read to the children I had them gathered on the carpet around the chair I was sat on, so that they were comfotable and could see the pictures as I held up the book. During the story I asked them questions such as "What do you think will happen next?" and "Was that a good idea?" It promoted discussion and allowed the children to get really involved. I also encouraged them to join in with the repeated rhyme that went through the whole book.

I think this was my favourite part of PP1, as it was the first time I was really engaging with the children. It was also one of those moments that the children enjoyed and allowed them to learn some social messages without experiencing a lecture. They loved and engaged with the beautiful pictures as well as the actual text. After I read it I asked a few cihldren what their favourite part of the story was and why, and I think that helped them to think about the text further, so I felt I was teaching and not just reading a story.