It’s almost ten years exactly since the devastating terrorist attacks carried out by al-Qaeda on the United States. Following the recent assassination of Osama Bin Laden by CIA operatives, how do we feel about the terrorism issue and what kind of changes have we seen in counter-terrorism law since 9/11? Has national security begun to interfere with the individual’s right to privacy? What are our attitudes towards the work of Intelligence agencies?

From 4th to 15th July, the Knowledge Centre we will be exploring the themes of terror and security, addressing the effects of 9/11 on policy along with many other facets of the terrorism debate.

Professor Stuart Croft from PAIS will be talking to us about the process of forming a national identity, and giving us an insight into his forthcoming book, Securitizing Islam, due to be published next year. Professor Kent Roach, from the University of Toronto (and currently a visiting fellow at Warwick’s Institute of Advanced Study), brings us a wealth of cross-disciplinary knowledge from the field of terrorism and security. We'll be providing video footage of his lecture based on his forthcoming book, After 9/11 (due to be published in September).

Touching on similar topics, Professor Jacqueline Hodgson from Warwick’s School of Law provides a short essay, The Complexities of Terrorism, which explores the difficulty of balancing the need for an effective investigation in terrorist cases with the due process rights of the accused to ensure a fair trial. ‘Liberty and security are not necessarily antithetical,’ she suggests.

Finally, Professor Andrew Easton, from the School of Life Sciences, will be talking to us about biological warfare and we’ll be catching up with the work of three academics - Professor Richard Aldrich, Simon Willmetts and Dr Christopher Moran - who have been involved in the AHRC-funded Landscapes of Secrecy project, looking at representations of the CIA. We’ll also be reviewing Lucy Walker’s documentary Countdown to Zero, which takes an unflinching look at the nuclear arms race.

We hope that you find this a thought-provoking theme and we'd love you to get involved in the discussion, which you can do by posting comments underneath our articles. We also host regular interactive features, and this month, Dr Steven Kettell, who is Associate Professor of Politics and International Studies at Warwick, will be available to answer your questions on the topic of Britain's role in the war on terror. 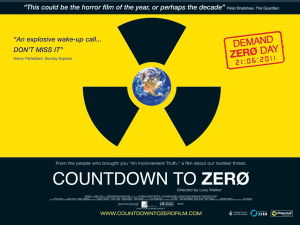 From 4th – 15th July, our theme on the Knowledge Centre will be “Terror and Security” and will look back over the past ten years since 9/11, examine different perspectives on global security, and how we manage the risk of terrorism.

Today is the nationwide premiere of the film Countdown to Zero about the war on nuclear weapons. Audiences will gather in locations across the UK and Ireland on “Demand Zero Day” to watch the broadcast simultaneously, and Warwick Arts Centre are one of around 60 cinemas taking part.

We have a pair of tickets to give away to this screening which includes a satellite broadcast of a discussion panel starring Her Majesty Queen Noor, Labour Party politician Margaret Beckett, ex-CIA operative Valerie Plame Wilson and Oscar-winning producer Lawrence Bender.

The premiere itself opens the Global Zero London summit with a Gala screening at BAFTA at which high-profile dignitaries, UK parliamentarians, and celebrities will attend.

To win a pair of tickets to the screening at Warwick Arts Centre at 6:30pm this evening, send your full name and telephone number to knowledge@warwick.ac.uk with the answer to the following question:

Who is the director of the film, Countdown to Zero?

Deadline for entries is 5pm today. The winner will be chosen at random from the correct entries and will be informed by phone. The tickets will be available for collection at the box office at Warwick Arts Centre.

Find out more about the screening on the Warwick Arts Centre website.