Just 56 days after it was created, Aeneas Wilder’s latest artwork, #162, will be ceremonially kicked to the ground by the artist this Saturday, 1 December, at the Warwick Arts Centre, Coventry.

The ‘Kick Down’ is where Wilder (pictured left), a Scottish installation artist, brings in an element of performance to his exhibitions. Wilder’s ‘Kick Downs’ are exclusive affairs and all the public tickets for this event have now gone. The Knowledge Centre has, however, been given two pairs of tickets to give away so that four lucky winners can experience this once in a lifetime event.

To stand a chance of winning a pair of these tickets, simply answer the following question:

Q) How many days did it take Aeneas Wilder to create #162? (Hint: read ‘What Goes Up, Must Come Down: A podcast interview with artist Aeneas Wilder’ for a clue).

Email us at knowledge@warwick.ac.uk with your answer, name and contact details. The competition closes at 2pm on Friday 30 November 2012 and entries will be drawn out of a hat that afternoon. Please include a mobile telephone number with your entry.

Full details of the 'Kick Down' are available on the Warwick Arts Centre website. 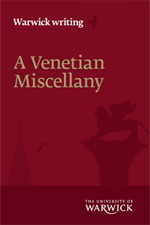 The University of Warwick has long enjoyed a connection with Venice; the University first put down roots in that city in 1967, when Sir John Hale, Founding Professor of History, took the first Warwick students to spend the autumn term at the Palazzo Brandolini. Over the last five years, Warwick has established a lively base at the Palazzo Pesaro Papafava, where it is now resident all year round, offering up to 80 students in History and History of Art an exciting opportunity to attend lectures while soaking up the atmosphere of the great city.

On October 20th 2011 the University of Warwick brings its Distinguished Lecture Series to the Palazzo Pesaro Papafava for the first time. The University’s guest of honour, Neil MacGregor, Director of the British Museum, will deliver a lecture entitled: Objects of concern: some of the things that preoccupied Shakespeare’s public, and the event will be hosted by the Chancellor, Sir Richard Lambert, in the presence of, among others, the British Ambassador to Italy, Christopher Prentice.

At the Knowledge Centre we thought it was the ideal moment to celebrate Warwick’s ties with Venice by offering readers the chance to dip into a brand new book of essays, A Venetian Miscellany. This collection has been drawn from academic staff, students and friends of the University, and touches on many different themes, from the rowdy graduation ceremonies that began in 12th century Europe - and still continue in Venice today - to American novelists’ approaches to writing about Venice. From Friday Oct 21st Knowledge Centre will be running extracts from the book, and there will also be the opportunity to download it (perfect for reading on your Kindle!)

We will also be capturing Neil MacGregor’s lecture for the site, along with a round-table discussion on the subject of art, which are due to be published in November. Until then, you can still access Knowledge Centre content on former guests of the Distinguished Lecture series including a video of James Smith, Chairman of Shell UK, talking about the energy challenge and Professor Lord Robert Skidelsky's lecture How Much is Enough? The Economics of the Good Life.