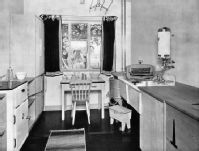 One room where we will definitely not be following 1930s design is the kitchen. I have been suprised how similar some of our modern design is to 1930s design in most rooms of the house, including the bathroom. But the kitchen is very different. It's amazing how much technology and modern convenience has developed in seventy-odd years. Go back to the early thirties and in the average semi you would have found a rather pokey kitchen, with a deep sink, nothing so glamorous as fitted units, a cool larder and probably a small gas cooker, as shown in this picture from MoDA.

In the inter-war years a battle for our homes was raging between the gas and electricity suppliers. Electricity was considered to be a clean, hygenic and efficient new technology and had already won the battle for lighting the home. However, the electricity supply fluctuated between AC and DC in different areas. This made people reluctant to buy big expensive items that were electric, which they potentially couldn't take with them if they moved to a different area. As a result, people tended to buy smaller electrical items: toasters, kettles, hair dryers, clocks, vacuum-cleaners.

A new invention, the thermostat, decided the battle for cooking. Ridiculous as it may sound, seventy years ago you couldn't just bang something in the oven and forget about it. Instead, you had to make regular checks that your oven was giving you a constant heat. The invention of the thermostat for gas ovens meant that the gas flame became the power of choice for cooking. 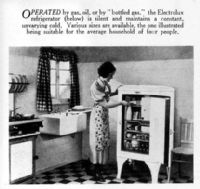 Your average semi-detached suburban home probably wouldn't have had a fridge. They were just too expensive. Instead the home would have had a cool, north facing larder for food storage. Both electric and gas fridges were produced and, although gas fridges were quiet and efficient (see the advert from MoDA ), electric ones seem to have won out in the long run.

Before the first World War domestic service was common and most middle class Victorian families employed at least one servant. After the War, the growing middle classes could not afford quite the same lifestyle. Most 1930s suburban houses were not designed or built with servants in mind and your average 1930s housewife had to adopt the idea of the 'servantless home' that popular women's magazines were promoting. The idea was that wives had to do the work themselves, with the aid of appliances such as the vacuum-cleaner and electric iron. Science and technology were seen as the 'saviour of the housewife' and 'the key to an effortless domestic future'. (Chuh.) This was reflected in the marketing and branding of the day:

Some [appliances] were given names that referred directly to them as wageless servants, such as the Atmos 'Housemaid', which could wash dishes and wash, press and iron clothes as well as vacuum-clean.

The kitchen in our house was extended and knocked through sometime in the 1950s (we think) and again in the 1980s, but you can still see where the small kitchen would have existed at the back of the house next to the dining room. We're lucky enough to be having a new fitted kitchen, new cooker (gas and electric!), new fridge-freezer and a new dishwasher and we're aiming for a fairly cosy, retro-farmhouse kind of look. Here are the Smeg fridge and cooker that we've opted for and before and after pictures of the kitchen will be in a gallery soon.

PS. By now some of you may have spotted the inspiration for my new look 'Bleg'!

We've recently moved into a new house. New to us that is, because it was built in 1932. While we were house hunting, our ideal was a Victorian or Edwardian house because we like the style, history and architecture. Then we found this; a standard 1930s three bed semi which has had all its original features stripped and replaced with hideous fake beams and flowery borders sometime in the 1980s. Three things clinched the deal. First, the short distance to work for both of us and then the fantastic views front and back (we're surrounded by fields). Finally, I did a nifty side-step in my mind (as us females are want to do) from liking Victorian to seeing the potential in 1930s design.

Before we signed on the dotted line I did some research into 1930s architecture and design, as it was an era that I didn't really know much about. Did art deco last long enough to influence the 1930s? Was it common in the average home? What sort of furniture did people have? What were the fashionable colours and materials? I was intrigued to find a lot of design and style ideas that I hadn't really considered before.

It made me realise how common place and reproduced Victorian 'style' has become. Walk into any of the big DIY chainstores and you'll no doubt find a repro Victorian fireplace. In fact, I bet a lot of peole are ripping out their original 1930s fireplaces and replacing them with reproduced Victorian ones. A quick search round our local antique and reclamation places proved that 1930s furniture and features aren't that common. 1930s style began to seem just that little bit different.

Conversely, it was amazing to see how much of our modern furniture design and decor is influenced by 1930s styling. Leather and chrome? 1930s. Wood bent into curved frames? 1930s. Streamlined shapes? 1930s. Solid oak floors? 1930s. Looking at photographs of original 1930s furniture, it's wierd how modern it looks. Take these chairs for example, for each pair the one on the left is a modern design available from Ikea, the one on the right is a 1930s original.

Suddenly, 1930s design went from being a vague concept to an interesting proposition and owning a 1930s house, missing its original features, became an exciting challenge. We don't intend to slavishly follow 1930s design in every room, but we do aim to bring some life back into the house with a nod to 1930s design here and there. 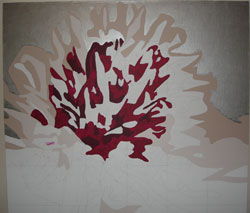 I've finally put paint to canvas on my latest creative project. I wanted to work on something that had big areas of flat, solid colour and on a fairly large scale so I came up with the idea of creating my own 'paint by numbers'. I've created a thistle canvas gallery so that I can see what progress I'm making.

I started off with several different photos and images for inspiration and opted for an image of a thistle. I put the image through various different filters in Photoshop until I had the affect that I wanted. Then I outlined the different areas of colour and transfered the outline pattern onto a large canvas. Usually you would use something like acrylics on a canvas like this, but I wanted to experiment a little and have opted for using up paint from all those little tester pots that you have left over after decorating. The paint is working really well and I'm using it up rather than throwing it away which is more environmentally friendly. I'm generally pleased with how the canvas looks so far. 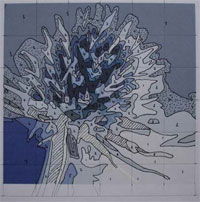 As usual the original idea has evolved and been adapted as I paint. I've amalgamated some outlines to create bigger areas of colour and I've moved some of the colours around. At this stage it seems to be shaping up well but I'm not sure that it will actually look like a thistle when it's finished! Doubts part way through are normal for me though, so I'll perservere.

I started this way back in October '04 but now that I've begun the process of painting work has picked up a pace and I'm hoping to have it finished over the next few weeks.

Perhaps this is inspiration for anyone wondering what to do with old tester pots? Buy yourself a canvas (you can get a decent sized one for about £15, this large one I've got cost £25) and let the artist within you loose with a paintbrush! If you don't have an inner artist struggling to get out, you could always mark areas with masking tape and go for a geometric pattern instead. 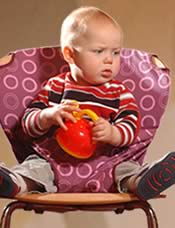 Some of our friends invented this – the 'Totseat'. It's a portable high chair made out of funky material that can be strapped to any chair. It squashes into a small carry pouch and is practical and washable. I had a play with it and it gets a high usability score in my view – easy to set up, adjust, clip and pack away again.

For those of you with kids, the Totseat is available on-line at http://www.totseat.com for £26. It's also now on sale in John Lewis and has had a positive write up in the Guardian – way to go!

My legs have never ached so much, but the scenery was spectacular and every step was worth it. We met loads of great people, mainly our age(ish), so here's to the 'laughing ladies' who we could hear all along the way, David & Shona 'from Maine' who we started and finished with, Andrew 'Land's End to John O'Groats' and his 'lovely ladies' who we wish the best of luck, the 'jolly pirates', the 'three muskateers' and the 'camping girls'.

Thanks also to all the lovely B&Bs that we stayed in. We had the warmest welcome everywhere we went, even when we arrived really late and dripping wet. Betty, you make the best fruit cake!

I fully recommend walking poles to anyone considering a long walk. I wasn't sure at first, so I just bought a cheap pair, but I really think that I wouldn't have made it without them. They are great for:

They are not so good when you've got one in each hand, your rucksack on your back and you fall over. Your arms are trapped and you end up doing a wierd version of an upside down beetle – only the other way around.

All in all it was a fantastic holiday and I would thoroughly recommend it to anyone. A week of fresh air and exercise with not much else to think about is remarkably relaxing.

May the Drovers never change.

The forecasters are toying with us!

Noooooooooo…......where did that blob of rain come from? What happened to the nice fat sunshine? Now we've got just about everything apart from snow and lightening! Sob.

It's looking good for Glasgow

Woo-hoo! The Beeb's changed the forecast to a big fat sunshine. I'm lovin' it!

Less than a week to go before we take to the hills and start developing blisters, getting stung by nettles and bitten by midges! According to the BBC, the weather is going to be doing this in Glasgow at the start of our walk:

That's okay, not too hot, not too cold and no rain. Let's hope that forecast holds!

Our preparation for the WHW is going well. We did a nice 8 mile walk in the Cotswolds at the weekend. Starting and ending in a lovely village called Ilmington, all yellow cotswold stone with thatch and cottage gardens, and climbing (!) to the highest point in Warwickshire. Not really a mountainously high point, but lovely views nevertheless.

Fitness levels seem to be holding up although my left achilles is niggling which makes me hobble after about 7 miles!!

Just found out that the West Highland Way Race sets out on the same day as us (19th June) http://www.westhighlandwayrace.org/. Only difference being that they start at one o'clock in the morning….and run. They have 35 hours to cover the 95 miles and have to pass through checkpoints within time limits. The course record is 16 hrs and 26 minutes.

Life beyond the fridge - BBC News