A year of Warwick Blogs

So, Warwick Blogs has been officially live for a year now. We've certainly come a long way in 12 months. It's almost hard to remember what it felt like at the start of last year, but this year certainly feels calmer as Warwick Blogs is no longer the new exciting thing it used to be.

So, how has it weathered once the initial interest died down? Depends who you ask and how you measure success, but I would (of course I would) say that it's been a success.

We've certainly let potentially thousands of staff and students express themselves online in a way that they just couldn't before and out of that has come some 42,000 entries, over 100,000 comments and 53,000 images. In the past there was just no easy way to share your thoughts, ideas, rants and photos with the Warwick community (and beyond).

When asked at the start of last academic year how many blogs and entries I thought we would get by Xmas, I said that I really had no idea what so ever as what we were trying was so untested within a university in this country and almost anywhere else. By the end of November 2004 we were getting 20,000 page views per day (proper page views not including images/robots/etc.). As it turned out we had 13,000 entries, 2,000 blogs and 26,000 comments at Xmas, turning it into the biggest educational blogging site in the world in just 3 months.

We are clearly not going to see that kind of rocketing growth again this year as it is only new to the 1st years rather than the whole University this time. However, we have steadily increased the features, reliability and power of the system over the last year and hope that there are new things to offer people who didn't try out blogs before or who gave up early on. Our BlogBuilder News blog has kept track of these changes and shows how far we've come.

I like my graphs, so here are a few showing a years worth of Warwick Blogs (they look a bit poor, but click on them to see a larger view of each graph) 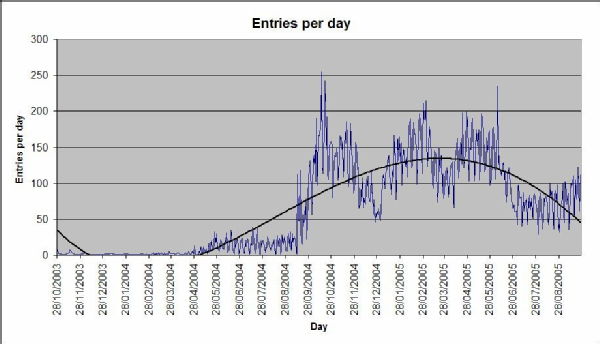 The above entries per day graph shows that we really do quite closely follow the term and holiday times with a hardcode of bloggers keeping going over the holidays. Generally speaking though we've stood at around an average of 150 new entries per day. I must admit a little disappointment that this has not grown much more, but it is still more than I had originally hoped for. 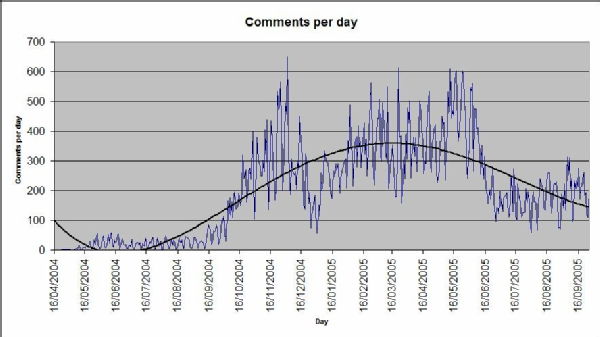 Comments per day is an interesting one. Again it tracks term time very well, but pleasingly it also shows that we have an average of 2/3 comments per entry, showing a good community around Warwick Blogs as the average entry on a blog in the wide world will be lucky to every get a comment at all. 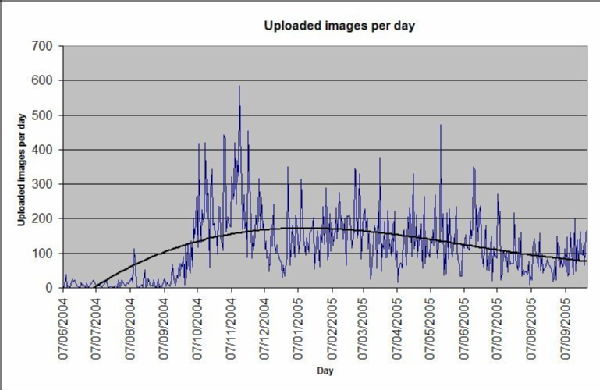 Images were another nice surprise for us. Although at the start we only provided single image upload (now we have zip upload and nicer galleries), people were uploading pictures left, right and centre. We have more images than we do entries, showing that people love to share their pictures, I can only hope that that will continue this year. Now that we have image tagging (like Flickr), finding and categorising images across the system is even easier. 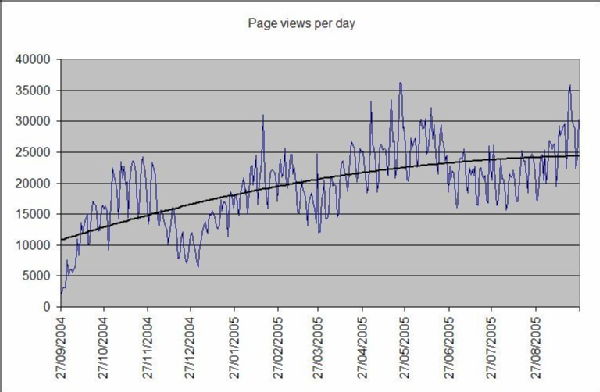 This is a slightly strange one in the sense that the growth is fairly clear, whereas the number of new comments/entries/images a day has not really kept growing, page views has. These stats are for real people viewing pages of entries, not images/css/javascript/robots/etc. We had 30,000 page views yesterday for instance.

Karen and Hannah have yet again done some great publicity again this year, but the emphasis has been a little more on the academic side of using blogs this time as we didn't really push it that way last year. Fingers crossed we can get some more involvement from our academics and get them communicating and interacting with their students online a bit more.