Follow-up to Some Warwick Blogs statistics from Kieran's blog 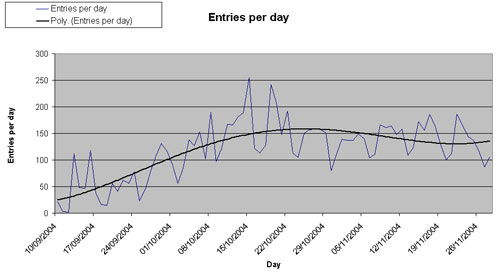 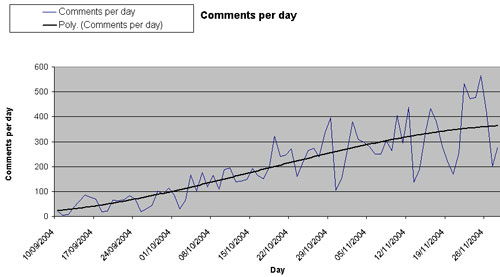 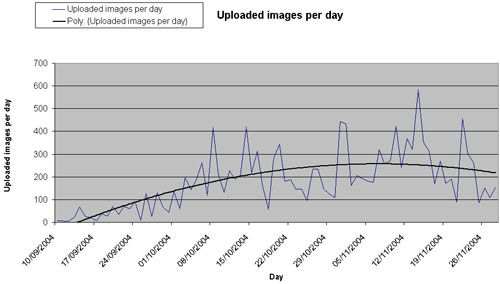 I'm just putting in this link so that my blog gets indexed by blogstreet. I'm kind of curious to see how it works.

A while back, Max Lyons created what is thought to be the first gigapixel photo. The final image is 40,784×26,800 pixels in size, and contains about 1.09 billion pixels. It was created by merging together 196 individual 6 megapixel photos.

Now, researchers in the Netherlands have created a 2.5 Gigapixel photo. The detail is simply amazing, you just have to go and have a look. You can zoom in on a clock tower miles in the distance and see the time as clear as day. But when viewed in a zoomed out mode the clock tower appears mere millimeters wide.

Now that my photo is up for a free upgrade and I'm hoping to get one of those 1 megapixel cameras…it somehow seems a bit low-res.

Browsing around the other day I managed to end up at a blog on the domain wsu.edu and it got me to thinking about what other universities host blogs.

A quick search of my memory and the web brought up these:

Middlebury College, Vermont, have an MT install that has around 200 or so blogs. Not sure what support there is for this project.

Washington State University has a blogging system, not sure what software it is though. Pleasingly they do provide a home page for the system which lists the most recent entries and provides a few stats:

The system is run by their Center for Teaching Learning, and Technology. There is more information about their blog project here.

Harvard University have one of the oldest blogging systems out there as it was created by one of the old men of blogging, Dave Winer. It is very difficult to see how active the Harvard blogs are, however, judging by this page there are anything from 2 – 20 blogs updated a day out of a total of 623 blogs. Harvard are running Manilla.

University of Minnesota are also one of the early entrants into the university blogging fray. They are running a custom version of MT again, but much more customised than Middlebury. They also provide some stats:

The University of Waterloo have used blogs in a slightly different way. They have installed a custom version of MT also, but have used it to create a very small set of highly controlled publicity type blogs. There are 6 blogs written by different students that are updated relatively often, at least once a week that provide insights into life at the University. A good publicity tool I think, unsurprising when it is run by their communications office.

And then there's us…I'm sure there are other systems out there that I've missed or that are just keeping quiet or private. But I would love to find out if there are more, and perhaps contact some of them to share ideas/experiences.

Firefox plugin of the day: ColorZilla

Almost every day I discover something new and cool about Firefox. Today I had a screenshot of a mock up for the new "My comments" screen for BlogBuilder, I had it open in Firefox. I just wanted to pick a few colours from the image but couldn't be bothered to fire up Photoshop just to grab a few colours.

ColorZilla to the rescue. ColorZilla is a Firefox extension that sits in the bottom status bar and lets you do all sorts of handy color picking features. It has a built in colour picker tool and an eye-dropper to pick any colour off the screen, even with a zoom function. It then lets you copy to the clipboard various ways of expressing that colour, such as #27657f, 27657f, rgb(15%, 40%, 50%), rgb(39, 101, 127). Great stuff.

A few other Warwick bloggers have mentioned Firefox (here, here and here ).

I'll also through my thoughts into the mix. I've been using Firefox for a long while now, in my opinion it has long since overtaken IE as the best browser available on a Windows machine.

What I love about it:

I had always hoped that we might hit 1000 by Xmas, but looks like we are more likely to hit 2500 by that time. As I've said in my previous entries, it is important to think more about activity than just sheer numbers…but still, numbers are nice.

Another bit of great timing is the we also overtook uThink, the University of Minnesota blog system in terms of number of entries today with 8647 entries as of right now.

I'm just looking forward to Xmas and the new year to see just how the use of Warwick Blogs evolves and hopefully grows.

Alexander and Elena Libin, a husband-and-wife team of robotic psychology researchers, found that the NeCoRo robots (below), manufactured by Japanese company Omron, increase attention and focus among sufferers of dementia and coronary artery disease.

"Robocats will be very useful in disease management, by reminding patients to take medication at a certain time," she said.

Now…is it just me, or is some poor old person suffering from dementia and forgetting to take their medication, in their drug (or lack there of) induced haze, not really going to be helped by some scary robocat suddenly spookily yelling (because they are hard of hearing) at them (In the style of the Cat from Red Dwarf)

It's 4pm and time to take your drugs, yeoooww!!

Take my depiction of old people with a pinch of salt, I've just got this really weird image in my head here

Fate of the world…Bush or Kerry?

I'm surprised with the lack of mentions of the elections today in Warwick Blogs. I can't help but wonder who the hell is going to win.

Reading my "Bushisms" calendar every day, I can't help but grow to hate Bush more and more each and every day, but will Kerry be any better?

My hopes are on Kerry…but I fear Bush will get it :(

The BBC published these scary figures:

I just had a look at image upload stats for BlogBuilder and had a nice surprise. So far there have been 8500 images uploaded by our users.

Around 600 different users have uploaded images so far. Obviously we are aware of some of the problems with image upload and the difficulty of managing galleries, but with this information in hand now, we can confidently say that image upload/galleries are well worth spending some time on as it is a feature people really like to use.

What would probably come along at the same time as gallery improvements would be the ability to upload other files, such as office documents, powerpoints, pdf's, etc…