Around December last year, I went over on my left ankle playing football and it ended up looking like this 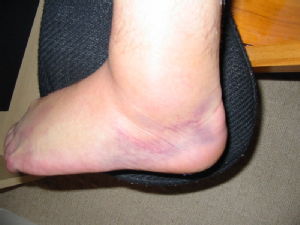 I did it again today, but this time on my right foot. I went over on it all on my own, no bad tackle or anything like that and it felt just like last year so I knew it was screwed :(

An afternoon of ice packs and pain killers means that hopefully I won't be off football for 7/8 weeks like I was last time. *sigh*

Well, one more half Spanish lesson last night. I say half lesson because during the break after the first hour I left :(

In a really quite disappointing moment for myself, feeling stupid and so frustrated with the course that I just went home after the first half. It turns out I'm just not suited to the course. Half the time we were just trying to read out or repeat stuff the teacher was saying, but with 15 people all trying to say it at the same time, I couldn't hear myself think. Not being a natural at languages, I was a second or two behind people half the time and by the time I tried saying stuff, everyone else was already saying it :(
Also, it just moves far too quickly, not giving us a chance to write things down or think about it before moving onto other things.

So, in conclusion I think I might have quit…I'll see how I feel next week. I'm certainly not going to give up trying to learn Spanish though, I've got my software which is pretty good and I may well get a better book (the course book is crap).