All entries for Wednesday 17 August 2005

Not much more to say really except that we've hit a couple of nice little landmarks recently.

I'll publish some up to date stats soon too.

Advantages of working at home #12

Eating lunch on the swing seat this afternoon…with Maggie. 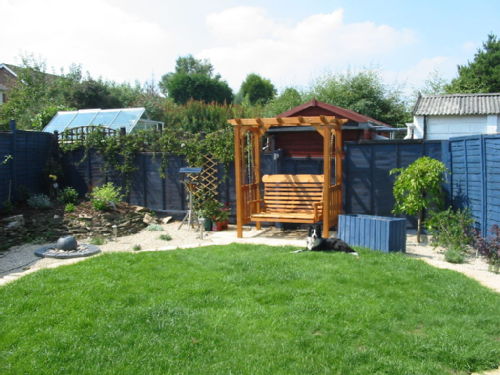 This picture also shows that the garden is really coming to life now, especially now that the lawn is growing back and the plants are starting to establish a bit…oh, and the water feature now works (on remote control :)

I was going to write something about this anyway, but Leighton beat me to it.

Leighton's band, Cooper, had a gig at The Lounge last night which went really well. There was a great turn out, including a bunch of people from work. I've not got any pictures, but Peter Marsh (of Warwick Shootout fame) was filming the whole thing…so I expect the first Cooper music video very soon!