In the context of fifth-century Athens, the sheer scale of the theatrical event must have had a strong impact upon the least impressionable spectator; heightening the significance of the events in the performance-space 17,000-fold and charging the excitement and emotion up to and beyond fever pitch. Imagine this raw energy channelled into an intense and climactic work of art – add to this the powerful drug of national pride and identity when all the citizens of the capital city of a great empire gather together in one space to affirm and consolidate their common heritage and identity through the re-telling of their myths and the celebration of the best of their poets, and consider in this light how very different the theatre-experience of the fifth-century Athenian audience was to ours.

We have no similar experience of mass-crowd dynamic at work on this scale in our theatres. In Greek Tragedy and the Emotions, W.B. Stanford makes the point that unlike today's safely segregated theatre seats, the Greeks would have been tightly packed together:

"If someone beside you sobbed or shuddered or trembled, you would feel it directly, and a wave of physical reaction could pass like an electric shock through all your neighbours . . mass emotionalism flourishes in compact crowds of that kind."

We hear from Plutarch of audiences spontaneously standing up in terror at a (lost) play by Euripides. Herodotus tells us that Phrynichus was fined for having distressed the city excessively with The Sack of Miletus, and that the play banned from further performances. 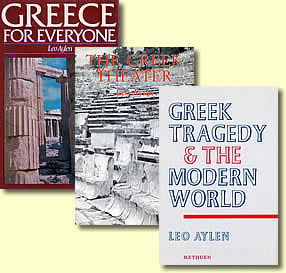