Csapo and Slater (from Hugh)

IVB. The Audience
IVBi. The Athenian Audience in the Fifth and Fourth Centuries B.C.
Extract from E. Csapo and W.J.Slater (eds) The Context of Ancient Drama (Ann Arbor: U. of Michigan Press, 1995) 286–290.*

Plato estimated the size of the theater audience in Athens at 30,000, but modern estimates of the capacity of the Theater of Dionysus vary between 15,000 and 20,000. This figure is roughly five to seven percent of the total population of Attica, which for 431 B.C. is estimated at 310,000, including 110,000 slaves and 28,500 metics. Not surprisingly, a number of sources attest fierce competition for seats. If Athenians were always the avid theatergoers Herakleides claims, then it is so much the more remarkable that we have no record of any attempt to restrict attendance. On the contrary, attendance at the theater was not only considered a right and privilege of Athenian citizenship (see on the theorikon, below), but the sources give ample evidence for the participation of all Athenian residents, whether metics or slaves, as well as large numbers of foreigners. 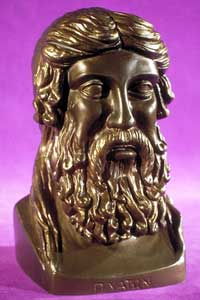 From 1796 to the present day, several classical scholars have argued for the exclusion of women and children from the festival. In our opinion, the testimony of ancient authors shows clearly that women (and boys) were present in the audience. The contrary argument rests mainly upon the comic poets' habit of addressing the audience as "gentlemen." This fails to distinguish physical from ideological forms of exclusion. Addresses to "gentlemen" show only that the notional audience was composed of male citizens. Athenian rhetoric was developed in the Assembly and the law courts, where the audience was entierly composed of adult males. When comic characters address the audience as "gentlemen," this is only a social and rhetorical reflex. The fact that the Assembly often met in the theater or that a mock trial (agon) usually lies at the heart of an Old Comic plot no doubt did much to reinforce this linguistic habit. Something more can be made of the habit of addressing the crowd as "men of Athens"; this reflects the speaker's desire to appeal to the segment of the audience that was generally deemed capable of formulating or influencing a judgment. The most comprehensive address to a Greek audience is "men and boys": evidence only of the conceptual invisibility of women in the theater, not of their actual exclusion. Possibly the number of women in the audience was disproportionately small, and [some texts] are frequently cited to show that "respectable" women normally stayed at home, but [other texts] contradict this view.

Some important developments affected the composition of the audience in the 5th and 4th c. B.C. The Athenian Dionysia grew in international prestige and popularity until it became a major Greek festival, by the late 5th c. second only to the Olympics. The increasingly international character of the audience at the Dionysia and (to some extent also) the Lenaea contributed to the gradual obsolescence of the political satire that dominated Old Comedy from ca. 430 to 410 B.C. The anecdote preserved by Aelian, though doubtless fiction, nevertheless illustrates the difficulty foreigners had in appreciating its parochial references. More important in the late 4th c. B.C. was the Macedonian support for the oligarchic faction in Athens, which culminated in the restriction of Athenian citizenship to the wealthier classes in 322 and 317 B.C. The new oligarchy dismantled several democratic institutions, among them the choregia and the festival fund (theorikon), through which the lower clases were ensured a place in the theater both as participants and spectators. The bourgeois character of New Comedy amply reflects the values of the dominant constituency in the late 4th-c. B.C. theater.

The origin of the festival fund is highly controversial. No ancient sources before 343 B.C. refer to the festival fund, but some of these trace the institution back as far as Pericles's democratic reforms before 449 B.C. The theorikon was a dole of money given to all Athenian citizens for the purpose of paying the cost of tickets to the theater, allegedly to give poorer citizens an equal opportunity to attend the theater. But there is also controversy over the function and nature of the theorikon. The ancient sources allege that seats were first sold in order to quell disturbances that erupted in the fierce competition for seats and that the dole was then introduced to allow poor citizens an equal chance of getting theater tickets. If this was its sole function one might have expected a distribution of tickets rather than the cash dole indicated by the texts, since this would simply have moved the site of disturbances from the theater to the ticket booth. Moreover the real obstruction to accessibility to the theater was limited space, not the high cost of tickets, which seems never to have exceeded two obols. It could hardly have been expected that all recipients would use the money to buy tickets, when the number of adult male citizens alone was at least twice the theater's seating capacity. It is clear however that the money was intended for use at the festival since the law restricted the theorikon to citizens actually present in Athens at the time of distribution. Doubtless the money could be used for general festivities and was not specifically tied to the theater ([some texts] allow for wider usage). The sum distributed is normally given as either 2 obols or 1 drachma (6 obols = 1 drachma). But by the late 4th c. B.C. the amount was 5 drachmas, an increase that cannot be entirely due to inflation. Perhaps the most important consequence of the institution of the theoric fund was to give the state a direct interest in stabilizing admission costs, and this was probably more important than the dole itself in guaranteeing universal eligibility, though the theater's size denied universal accessibility.

The practice of leasing the theaters to management corporations probably predates the introduction of the theorikon, since the latter seems to presuppose admission charges paid to a third party: the system would make little sense if the state merely collected the cash at one end that it distributed at another. Ulpian's reference to the theater manager (architekton) seems to point to this conclusion. Possibly the leasing arrangements and the theorikon were introduced simultantously. One ancient account associates the origin of the theorikon with the first attempt to sell seats in the theater. If this connection is sound, then the references to theater lessees would support an early date for the theorikon. Of great interest is a fragmentary inscription recording the details of a contract for the lease of the theater of Piraeus for a sum of 3,300 drachmas, which we are told is 300 drachmas more than the deme expected from the contract. Unfortunately, we do not know how long the lease was for. It appears that the cost of seats was stipulated, doubtless 2 obols. The contract further stipulates that the lessees are to build benches for the audience and give free admission to all those granted prohedria [seats of honour]. From 330 B.C. frequent reference is made to an official called the architect (architekton). His full title is the "architect in charge of sanctuaries." Inscriptions show that he is an elected magistrate by 270 B.C. His appearance seems to indicate direct assumption of the management of the theater by the state, a possible consequence of the construction of a permanent stone auditorium under Lycurgus. Leasing arrangements continued at Piraeus because it was a wooden theater and the auditorium, if not the stage house, had to be reconstructed for each festival, but by 307/6 B.C. an inscription attests an architekton for the theater at Piraeus. This perhaps reflects the increase in direct state control of the theater under Demetrius of Phaleron (the regent imposed by the Macedonians in 317–307 B.C.) rather than the rebuilding of the Piraeus theater in stone.

Seating arrangements also appear to have been regulated directly by the state. They reflect Athens' most important political and social divisions. The firt few rows bordering the orchestra were reserved for various officials, foreign dignitaries, and such public benefactors and culture heroes as victorious generals or athletes. The privilege, called prohedria ("front-seating" – the term is used both of the provilege and the place), could be a perquisite of public office or a special honor conferred by a vote of the Assembly. The marble prohedria of the theater of Lycurgus can still be seen in the theater today. At the center of the first row is the highly ornate throne of the priest of Dionysus Eleuthereus with marble seats for other sacerdotal figures on either side. This arrangement doubtless carries on the tradition of the earlier theater where the priest of Dionysus was easily accessible to the actors. Literary sources attest permanent sections of the theater reserved for the members of the Council, young men on military service (epheboi), the archons, the nomophylakes ["guardians of the law"], and the generals. Apparently nothing prevented ordinary citizens from occupying seats in the front rows. Prohedria only conferred the right to oust other occupants from front-row seats, though exercising that right could sometimes be problematic. Honorary grants of prohedria sometimes involved an escort by state officials.

Behind the prohedria the common people sat on wooden benches until Lycurgus. From Roman times three statue bases dedicated by the tribes Erechtheis, Akamantis, and Oineis were found at the foot of the first, sixth, and eighth wedges of the thirteen kerkides [wedge-shaped seating sections] of the Theater of Dionysus, and these correspond to the traditional order of the ten tribes if the central wedge is given to the Council and ephebes and the outer wedges to noncitizens and perhaps also citizen women. This can be taken together with epigraphic evidence for tribal seating at other Greek theaters and Athenian tokens, identified as theater tickets, stamped with tribal names, to argue that an ideal tribal division was maintained at the Theater of Dionysus. This would have been particularly useful to stimulate rivalry for the tribal dithyrambic competition; perhaps also to control excessive rivalry. There is, however, no reason to think that this division was ever strictly maintained or even voluntarily observed for drama, which had no tribal basis, though even here partisanship could run high.

The sources all depict Athenians as a demanding, unruly audience, and anything but passive in expressing approval or disapproval. The festival atmosphere did not have the polite tone of modern theater audiences. Part of the expense incurred by a comic choregos went to the distribution of food and wine to the spectators. A much underestimated part of the Old Comic poet's art was to keep the audience actively participating in the performance and to cue it continually for outbursts of approval not only to impress the judges but also to control its energy and prevent it from overtaking the performance. Tragedy stood in a much more precarious position: the slightest awkwardness could result in outbursts of disapproval, shouting, hissing (or whistling), clucking, heel banging, and, possibly, food throwing. Prolongued disturbances were frequently resolved only when the actors and chorus abandoned the performance, a calamity that befell even the best tragedians of the age. Crowd control appears to have necessitated a special force of theater police, called "rod holders" (rhabdouchoi).