Follow-up to It was going so well. from Being the (Mis)Adventures of Mr Bear

Police have released the following statement:
"As yet we have no leads on the case of the tradjic dismemberment of Mr Monkey. The guests at the party have been questioned and investigations are underway. Please do not hesitate to contact us if you have an information that could be of use. We are particularly trying to piece together the events from when Mr Monkey supposedly went home, and from where the story that he had 'dropped
out' has come from.

We unfortunately regreat to say that there has been another murder; again a friend of those of Mr Monkey."

Due to the nature of the picture, the picture will not be shown here; but it can be found here 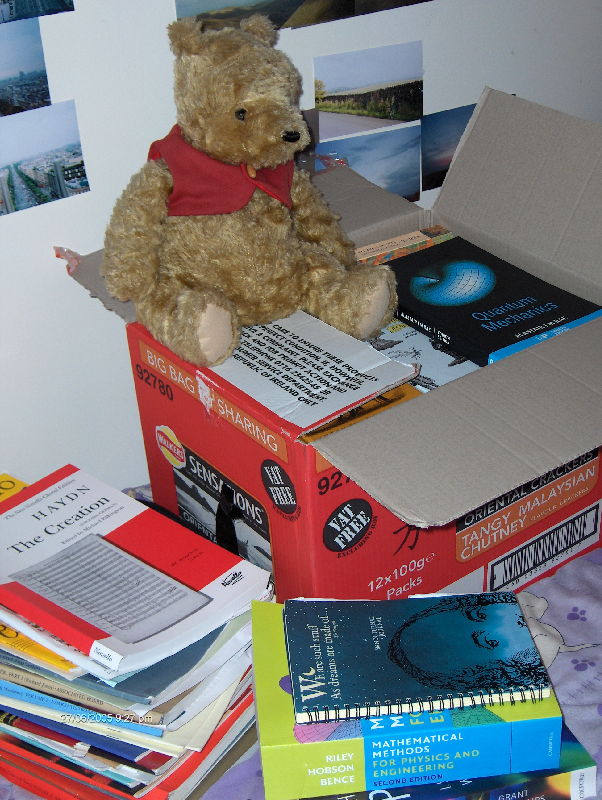 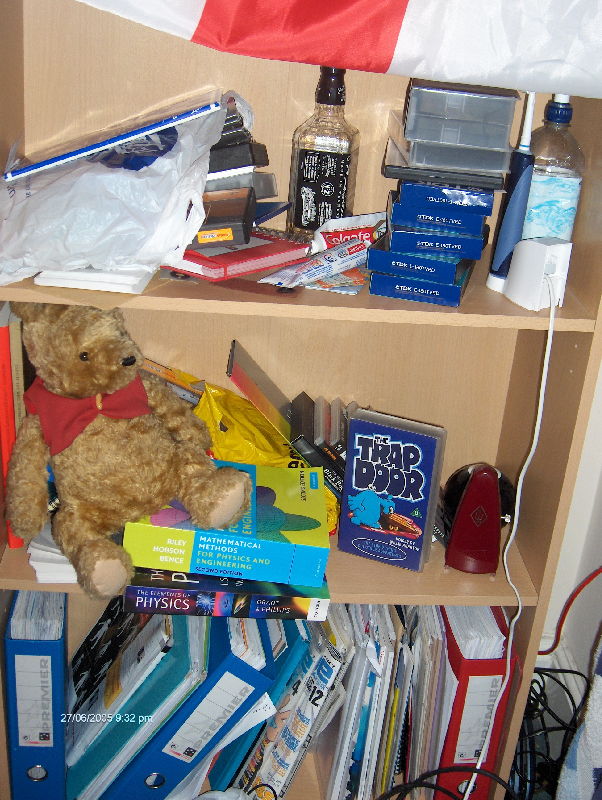 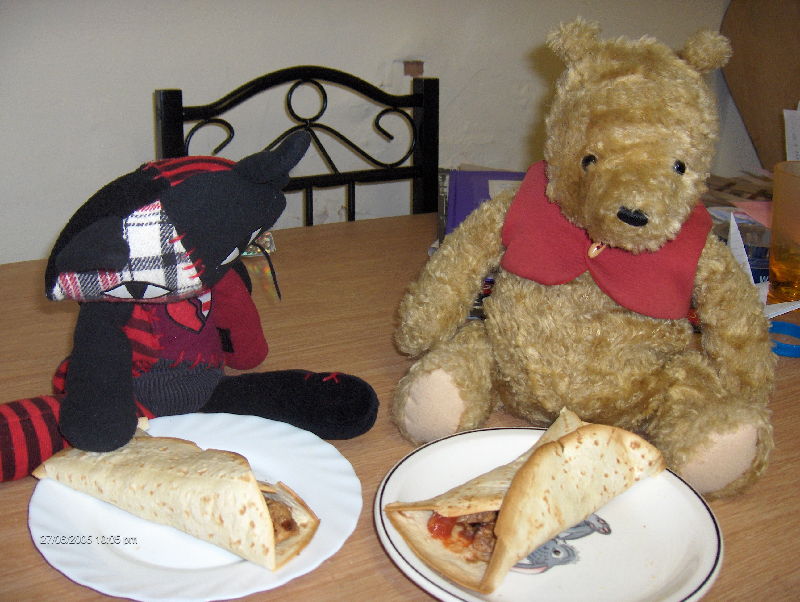 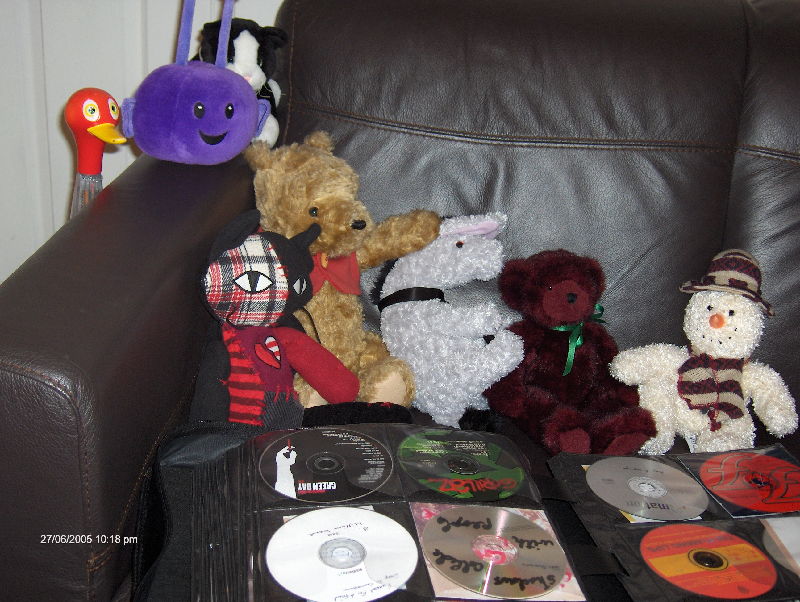 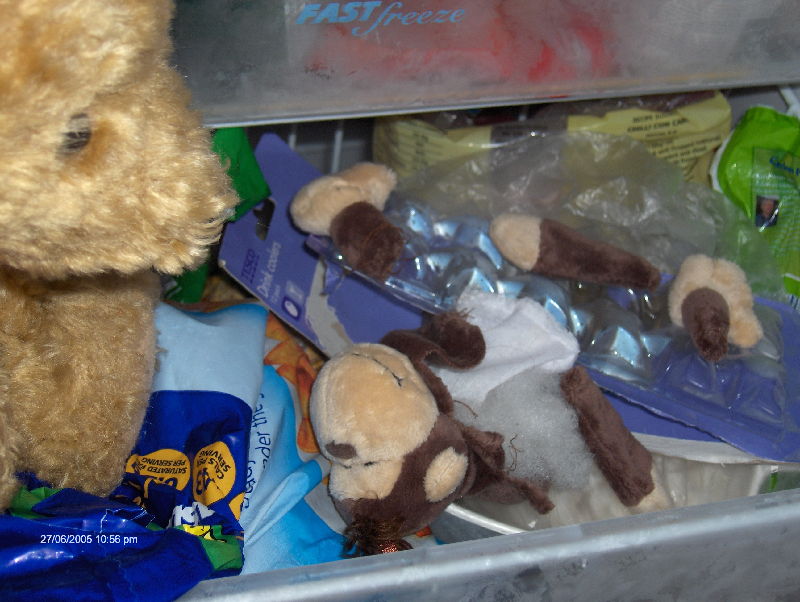 Thursday: Mawda had a gig in The Attik in Leicester, getting home was gong to be all good, and so I went along. It was a good gig, we didn't stay for all the bands, as Matt's brother, Ed, was there, with his girlfriend, Charlie. 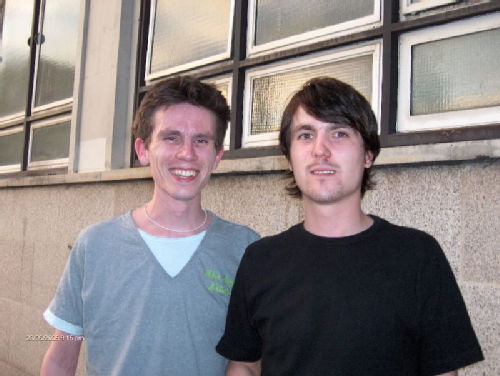 I've meet Ed before, he was just as much fun as ever, but I really didn't know what the expect from Charlie. Charlie is small, and very cute. One of her housemates had a gig in The Shed, so we went there (hence the not staying for the rest of the bands). They were good, very tight.
Afterwards, we're wandering towards the station, as it's going home time for Matt and I; Charlie comes up with a plan, and then Matt is using my phone to call rail enquires to see what train we need to get to be able to get back to Leam for 9 (Matt has work). We need to be up at 6 :S, however, we decide that it is possible, and as Matt doesn't see his brother so much, it was going to be worth it.

First off, we go to a place called Revolutions, it's a bar, we have drinks, while sat on very high chairs. The we head next door to another bar, which had lower seats. 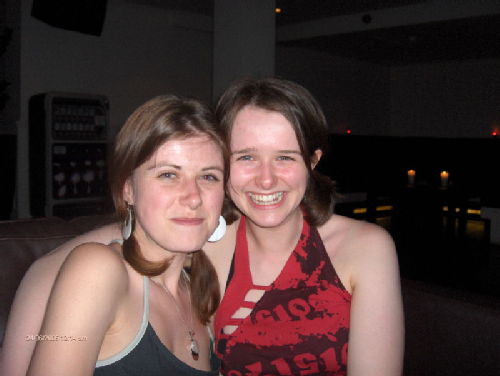 This is Charlie and I, while quite drunk.

Fromt here, we went to The Basement, and there was a band on; we only stayed a short while before going to drink some more in Sumo.

Then it was home! (Well, Charlies')

We made it to the station, we had the plan, Leicester to Nuneaton, Nuneaton to Coventry, Coventry to Leam. Leicester to Nuneaton, fine, all good. Then to Coventry, no luck, something happened, there were trains not running to anywhere. There were gong to be coaches, nope, that was going to take ages. Result! (of sorts) there was a train that was going to make an extra stop at Litchfield. Litchfield? what sort of a place is that? where is that?
Anyway, so we go the the train to Litchfield, and from there, a run in the rain up some steps to get a train to Birmingham. So far 3 trains, just to get to Birmingham.
Birmingham, it's about 9:30 now, oh! there's a Cov train leaving in 5 min, run to platform, pile on, with everyone else. 9:50 – 'Can all standing passangers get off the trains, we're adding another carriage.' 9:53 (ish) – 'Can all the passangers please return to the orginial carriages, this one is locked.'
Me to Matt – 'Wait isn't there a train going straight to Leam at around 10?'
Matt – 'Yeah, lets go for that'
Run around a bit, get on train, sit down, sleep, arrive in Leam around 10:50.

Mission Completed, and Matt didn't get in bother at work as trains are crap.

A Day In The Life…

Mr Bear has had a very productive day today and he's decided to share some of it with you.

First he cleaned his radio: 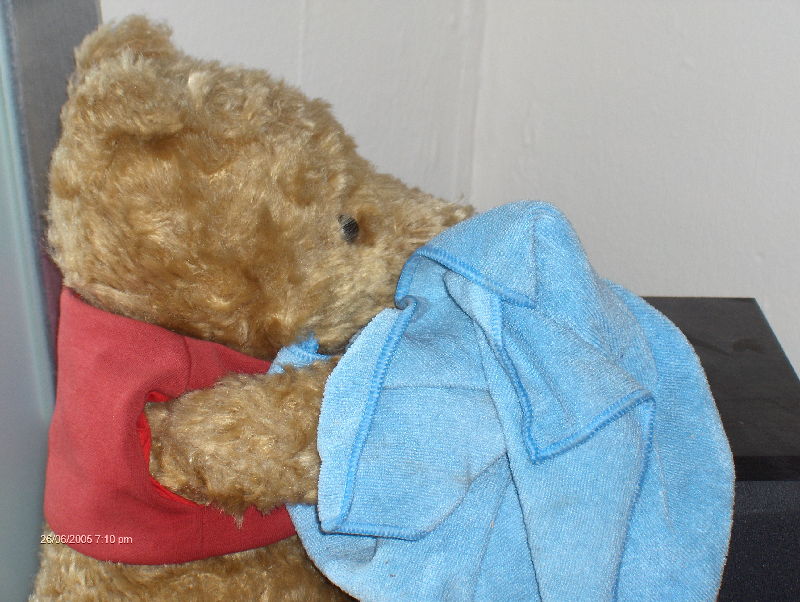 The then banisters and stairs: 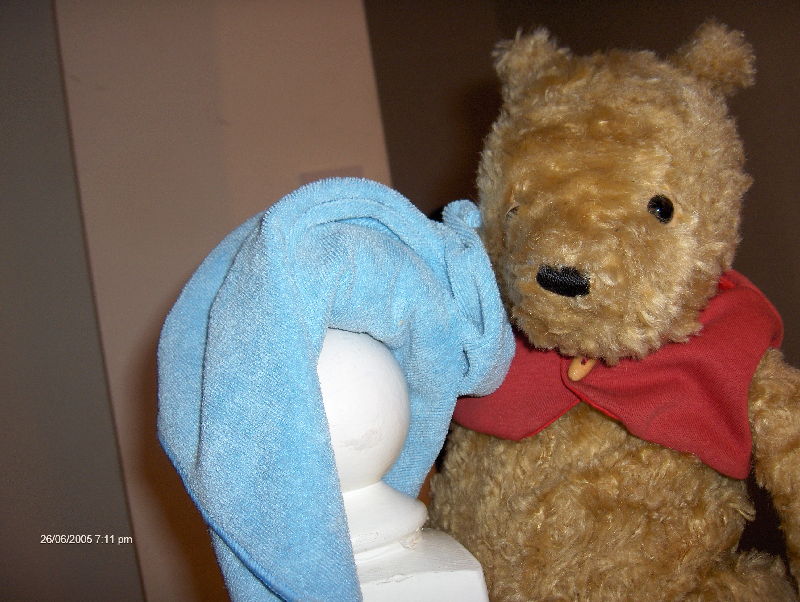 He also cleaned the hallways and part of the kitchen. He then went to his room and played one of his favourite games: 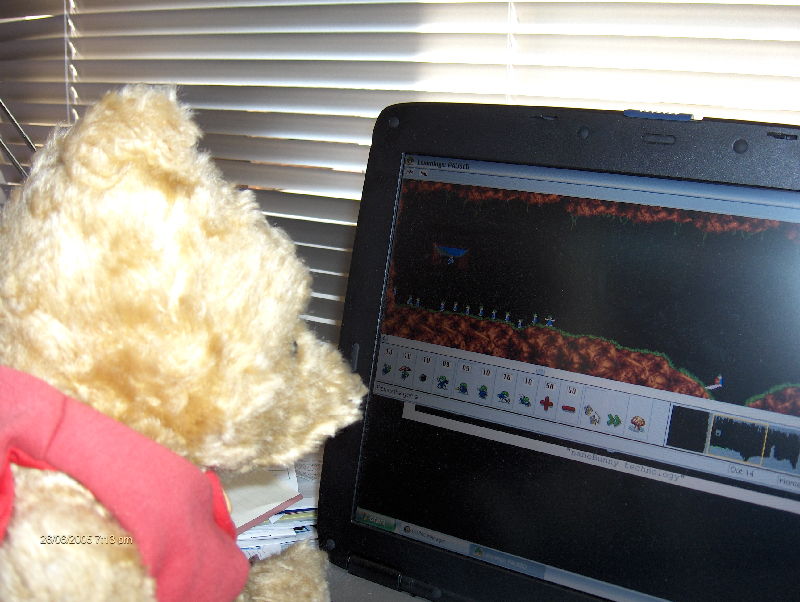 Mr Bear wondered what he would look like as a lemming: 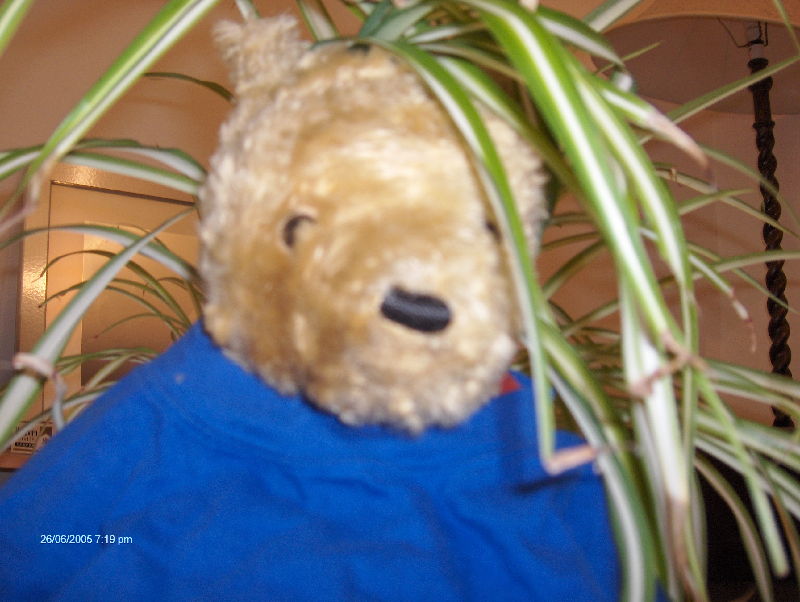 Hum, what do you think?

And the RESULTS are back

Yesterday, Mr Bear got his results back.
It didn't go too well. 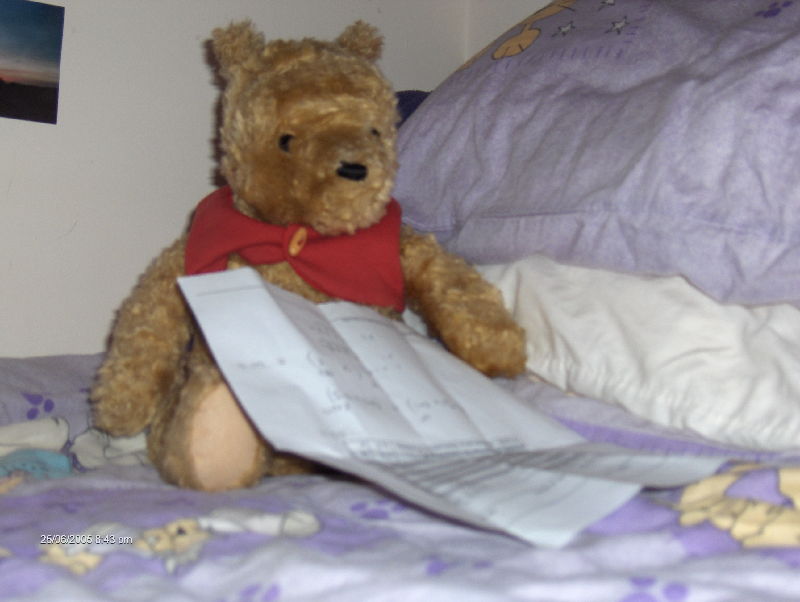 However, while he was sat in his room lloking it over, he thought, actually, it's not that bad, I can still do well next year.

Mr Bear wishes Good Luck to anyone who has their results yet to come.

Mr Bear is sorry that he hasn't been able to get round to publishing this, so here it is:
Mr Bears' last exam: 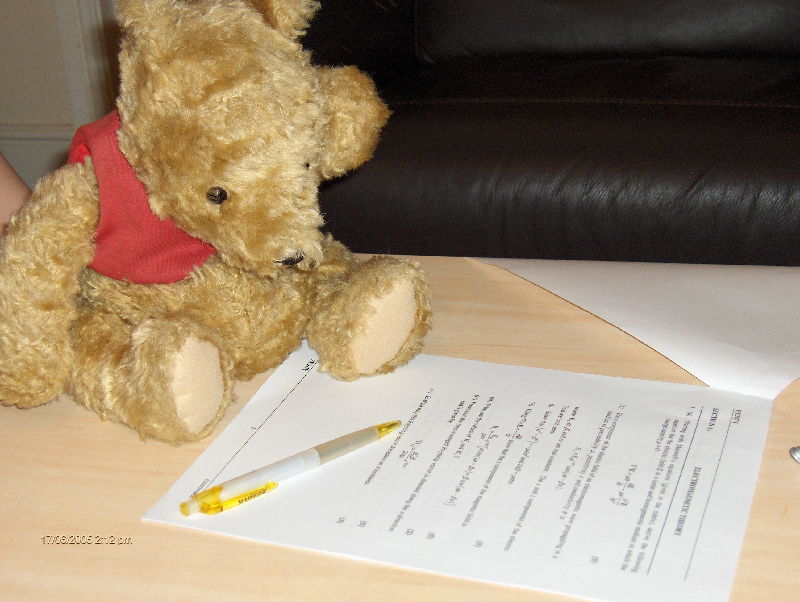 Oh dear, it doesn't look like it's going too well does it?