Let me tell you a story about three young men. Thomas, the irrepressible dandy, Nicolas, the irresponsible rake, and Ramon, who was merely irresolute and who was forever changing his mind, as Thomas changed his clothes, and Nicolas changed his women.

Now, it was a soupy evening in the slack end of spring, and Thomas, Nicolas and Ramon were lurching inexorably from the rank den of the pub towards some party. Thomas was inspecting his soiled shirtsleeves in the stark yellowing streetlights. They were dank with the beery sweat of pint glasses and had woefully abandoned their original pristine white. Sullen and uncharacteristically silent, Nicolas nursed the livid scarlet smart of a slapped cheek- the price of having numerous interchangeable lovers who inconveniently patronise the same pubs. Finally, Ramon was muttering dreamily to himself, for he was uncertain whether he should attend the party at all or whether it might not be better perhaps to go home and blog interminably about his own indecisiveness. It was raining.

Suddenly, three skeletons appeared, resurrected in a puff of deliquescent smoke. Each was caked in corpse slime and their moist, glutinous remains gleamed with a strange, macabre incandescence. Their delicate bones were luxuriantly draped in fetid rags, indistinguishable from the rotting flesh and sinews that still clenched their cadavers together.

The boys were quite astonished and stopped in their tracks.

“You!” proclaimed the skeletons in hollow, resounding voices, each raising a reeking digit to point at the young men with deathless grins. “You are, what we were.” They hissed, “What we are, you will be!” With this the skeletons cackled gleefully and danced back into the ether, unearthly echoes reverberating about the boys’ ears.

For some time the boys stood frozen with unimaginable terror. Eventually Thomas found himself able to speak:

“Did you see his hat?” The others shook their heads mutely. “Quite horrid, I should say. Absolutely passé.” And Thomas shook the rain off his hat and continued on his way to the party.

There was a long pause before Nicolas offered “That one in the middle though, the girl” (he play-acted worldly rumination) “You could tell she was pretty once… Nice figure, not too fat” With this he flashed an echo of his inexorable sexy smile, stuck his hands in his pockets, and sauntered off to the party.

Ramon remained silent and alone in the street for some time. “I don’t know, though,” he said, to an empty sky. He scuffed his shoes in the dirt. “I’m going home”. And he strode away into the embracing dark. 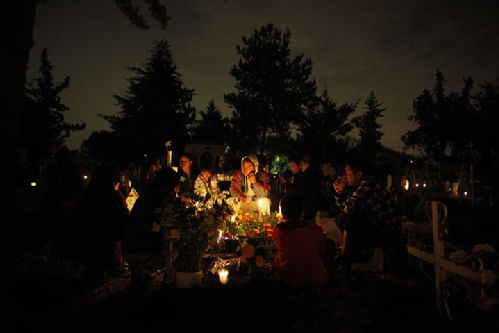