Just had a major nostalgia burst for the Moldy Peaches. Yes, they ruled, but note to self: BACK THEN YOU HATED YOURSELF.

Currently listening to some MF Doom to erase the baneful effects of nostalgia. God forbid that in three years time MF Doom will be a nostalgia burst.

this title is better than yours

Ok, so recently I conducted a poll amongst myself to find the most "rock and roll" and most "punk" songs ever written or recorded, and found that the answer to both questions was the same: Bikini Kill – Don't Need You. And people dared to say that Johnny Rotten sounded "punk" – Kathleen Hanna fucks Johnny Rotten up the ass.

Thought 1: any good band needs good drums, and I don't mean that in the "man, he plays good drums", justification for Blink 182, kind of way. Janet Weiss (Sleater-Kinney, Quasi), is a good drummer, but this would mean shit if it wasn't for the fact that the drums sound good on record and live. Meg White, for instance, is a great drummer in that her drumming is perfect for who the White Stripes are: Travis Whatthefuck from that defunct pop-punk band would sound ridiculous in this instance, and hopefully would get a pounding from Jack White (who seems predisposed to doing stuff like this).

Recently, I went to a Warwick Offbeat night, and had a shit seven hours salvaged slightly only by my own drinking. My bitching on this subject has been covered before. But my new angle is thus, and influenced by my recent listening: why did they not play anything by MF Doom. Doom annoys me because I hadn't heard anything by him before he breached mainstream indie conscience and pitchfork started furiously beating themselves off over him. Thus I cannot get heard-him-first syndromed. However.

Doom utterly rules. I have no idea if he and Aesop Rock have ever recorded on the same track, but if they have, it's probably the pinnicle of everything ever, or something.

Less now, more then: I wish the Moldy Peaches would reform. I must have seen them live about four times, and seeing as I've been to two gig in the last two years (man I need to stop being a recluse, or at least move to America where they have good bands) that is pretty good going. Oh the UTTER joy when John Kennedy played Rainbows on live radio without having heard it before, then realised quite what the language on it was like. Sample lyrics:

Is it only me who finds those lyrics strangely touching and beautiful?

Anyway, I met John Kennedy once, but was too starstruck to talk to him. Starstruck, by a man who looks even more a nerd than I do. I don't even believe in the culture that would ALLOW me to be starstruck. Man I am quite lame.

Time to take Man Utd to the cleaners

Probably the biggest game for Barnet since our first promotion to the football league at the start of the 1990s. Sadly Alex Ferguson has decided to hand squad numbers to five previously unpicked reserves, suggesting that only a few first teamers will be out there. On the other hand, Saha has been dropped, so clearly they're taking the game seriously. The charming pair of Rooney and Ronaldo will reportedly be starting on the bench in case of any emergency.

Good to see encouragement from ex-Barnet manager and Man Utd player Barry Fry: "United, 7–0!". I guess at this point I'm supposed to hope for any scoreline that looks respectable. Bollocks to that, I want us to try and hammer them.

lists: a lazy excuse for not constructing a proper entry, aka American cities I'd like to live in

Plus a thumbs down to wb for not allowing titles longer than 100 characters. 250-letter titles are the way to go.

The Llama Farmers in retrospect, plus more fun

Seriously, despite the name, the bad hair, and the fact that they were four teenagers from Greenwich, they really were very, very good. One day I might even buy something by them (lies, I have an EP and a single). At random I shall choose a band that they are six times better than: New Order. The end.

Bands who got worse: Idlewild. Not that they're now a bad band, but seriously, listen to "you just have to be who you are" and if you dare try and tell me they have ever recorded a better song i will snap you a rib. I only wish I could have seen them live before they got mellow. A shame. "You cha cha cha by hell you are", or whatever they were shouting.

Anyway. Linguistics, semantics, or whatever the correct term is, but I find the structure and (particularly) the appearance of sentences to be extremely important. Capital letters ruin the symmetry of sentences, but it feels somehow wrong to leave them out. Maybe giving up commas is the answer. Well. Might get back to this one later, one day.

Speaking of Idlewild, another band who fell off: Gorky's Zygotic Mynci. Yes, they are still good. Yes, I saw them in 2004 and they were great. However, the best part of the 2004 great experience was hearing Diamonds O Monte Carlo, from their debut album Patio. It enduced severe emotion, etc. It's a fucker that my tape copy of that snapped. Anyway, they need to stop being an above average folk band, and go back to being the awesome welsh-language brilliance that they once were. Once they were so good that I wanted to learn to speak Welsh. More of that please. Thanks.

Gang of Four were also good. Pity they got shit and reformed. Fair enough though, having seen x,xxx,x26 bands rip them off over the past couple of years, they at least had an excuse, unlike most of the other cack-merchants who re-collect their greasy forms together to jerk out their "hits".

Offbeat news: I have as much chance of going to another Offbeat social as I have of licking a leper. No disrespect to the three people I spoke to (in the six and a half hours I spent in offbeat company), but it really sucked. I am quite capable of drinking too much and sicking up in a number of places, and most of them have a better soundtrack.

Respect given to the fellow Shellac fan though.

Well, I went, after nerves etc stopped me going from such things before. The first two hours were alright, and I spoke to a few people. I got the impression that the Colosseum event starting at 10PM should be avoided like the plague, but I ploughed on regardless.

A brief description of my 4 hours at the Colosseum: fucking shit. fucking fucking fucking shit. I'm perfectly capable of drinking on my own in a number of varying and exciting places, I don't need a club in which to do it. The idea of having a first social of the year, where people are supposed to get to know each other, in a club where this is clearly impossible, is an idea of startlingly bad proportions. The music was shit, the people were unfriendly, everything was crap. Not good.

Needless to say I drank stupidly large amounts to compensate for the general feeling of shitness, got the coach back at 2:15, sicked up, and collapsed asleep in a drunken heap on my bed. All in all I feel that the evening was a thumbs down. Chances of me going to another offbeat sociall: slim to none.

Surely now the time has come to sack Sven Goran Eriksson? 10 reasons why we don't need the Swede

A picture, a plea 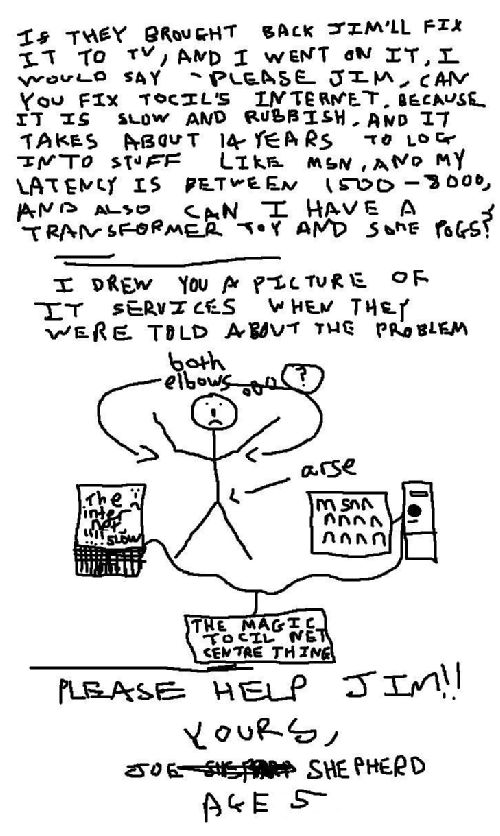 10 reasons why the NME has always sucked

Julie Burchill
Stuart Maconie
Johnny "Stereolab 0/10, I went to Warwick University, I have a rubbish name and I hate Billy Childish because he wouldn't let me into a gig for free" Cigarettes
Gary Bushell
Michael Winner
Danny Baker
James Brown (Loaded founder)
Tony "worst human being in existence" Parsons
Conor McNicholas
A million and one other cliched fuckfaces

Steven Wells aside, the NME has always been a hotbed of shit. Thee Headcoats got it spot on: "we hate the fucking NME".

songs that you could listen to on repeat for approximately three hours and they would still rule: 1

The Thermals – No Culture Icons