All entries for Friday 30 September 2005

The man had the quality control of a dog pissing on a car tyre. He was an ex-teacher, famously a drunk, and sacked god knows how many band members. He was quite clearly a genius when it came to songwriting, even if at least 1/3 of his songs were scratchy demos that he stuck on albums regardless. Utterly brilliant, listen to The Best of Jill Hives and say that he didnt have a beautiful singing voice. And he drunkenly high-kicked higher and better than anyone will ever do. 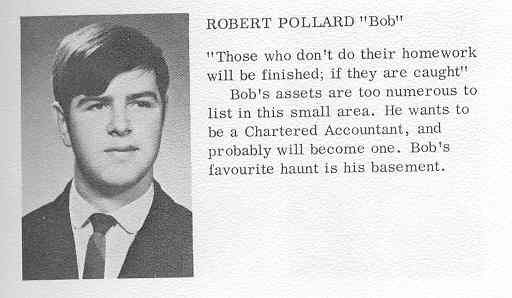 Sometimes the titles come first; sometimes I write poetry and Ill write songs to the poetry, so the lyrics comes first; and then other times Ill be sitting around playing guitar and brainstorming chord progressions on my tape recorder. I dont really have many guidelines or formulas. I just let whatever comes natural. I know some people worry about writers block, but Ill have to knock on woodI dont have wood, I have glass hereI have not experienced writers block. So I dont worry about it. If I get to the point where I dont feel very creative, I use that as a time to relax and just wait till it happensand it does. You never know whats going to trigger that spurt of creativity. It could be movies, it could be albums or it could be hanging out with people that are saying interesting things.

In Bob we trust – goddamn right

This term, in a bid to avoid the rather disasterous disasters that were my first two years at Warwick, I will attempt to a) sign myself up to some societies and b) actually turn up occasionally. Anyhow, the prospective barrels of fun are:

The fun ones:
Offbeat (because music is wot is good like)
bright side – Chance of mutual Steve Albini, John Darnielle or Kathleen Hanna appreciation
down side – They appear to like Crash. I don't like Crash. If anyone mentions Oasis I will send them through the nearest plate glass window. I don't like Oasis either.

The Warwick ones:
History (in the words of the Au Pairs, "it's obvious")
bright side – Amazingly enough I actually like the course I'm doing
down side – Pub crawls and clubs really aren't my thing – I prefer to do my drinking in places where a toilet bowl is an easy 5 staggering steps away

Warwick Boar (because I'm a disgusting media whore to-be, possibly)
bright side – I need something to put on my cv other than "kitchen rep and lazy exam invigilator"
down side – I think student newspapers are rubbish

The political ones:
Amnesty (most people don't like electrodes on their testicles)
bright side – Because somewhere in my head are morals and ethics trying to get out
down side – Po-faced activist types make me want to smoke crack

Socialism (all power to the soviets and all that)
bright side – Every time I call myself a liberal I feel slightly dirty
down side – There are (at least) two socialist societies. Peoples' Front of Judea, etc)

T'other ones:
International Current Affairs (sounds f u n to me)
bright side – Will prompt me to buy newspapers occasionally
down side – Not really an eyecatcher, just padding the space for the next society…

Warwick anti-sexism (feh-muh-nist)
bright side – I genuinely care about it, without worrying (as with amnesty et al) that it's just guilt talking
down side – they really should have the balls to call it the feminist society. Yes it might reduce it's membership, but anyone put off by the term isn't really the ideal kind of member anyway.

Onwards Tuesday (or whenever the hell it is).