All entries for Wednesday 16 November 2005

Bands that I relied upon to save music:

Prolapse broke up
Bikini Kill broke up
Le Tigre sold out
Coachwhips broke up
Erase Errata fucked up
Atom & His Package broke up
Guided By Voices broke up after many years of having shits at festivals ignore them whilst waiting for Feeder to show up
Hint Hint broke up (I think)
Beulah broke up
Quixotic broke up
The Breeders just stopped being, in favour of their inferior predecessors The Pixies
Stereolab tragically lost a member
The Mountain Goats got rid of his boombox
Puerto Muerto probably split, thought I've no idea really
Mclusky broke up
Gorky's turned into a dull folk band
Cibo Matto broke up
Aesop Rock's beats declined plus he lost his edge
Papas Fritas just quietly disappeared
Llama Farmers broke up
Lo-Fidelity Allstars lost the singer, and consequently turned shit
Shellac haven't released anything in x years
Refused are fucking dead
Marine Research broke up
The Casual Dots disappeared
Prolapse have not reformed in the last half hour

The Gossip lost their drummer Kathy Mendonca, who was awesome
Electrelane's last album was disappointing
Chicks on Speed's last album (with the no heads) also disappointing
Mclusky followup projects will probably will be a let down
Shonen Knife are they possible still going? I hope so
Single Frame were never really that great
Lolita Storm, where are they?
Jetplane Landing have released nothing new for a while, I think
Tracy & the Plastics are awesome but will never tour England
The Rogers Sisters are good but not great

So may I take the opportunity to say:

fuck the killers
fuck the kaiser chiefs
fuck franz ferdinand
fuck the subways, the most average band around
fuck oasis, who proved that arrogance isn't always a good thing
fuck the arctic monkeys, the test icicles and the other bands Domino are using to make a buck or two
fuck whoever edits the warwick boar music section and allows the pieces that are printed in it, they inspire simultaneous vomiting and cringing which i until recently thought impossible – see the recent article on the brakes for proof
fuck U2, and especially fuck all U2 fans
fuck the libertines, fuck pete doherty, but most of all fuck everyone who's pathetic interest in the travails of a tragic crack addict fuel meaningless boring celebrity
fuck the new musical express and those that hang on to its every word, yet try to maintain the illusion of maintaining their independence from it
and, in the words of bratmobile, "fuck you too"

Fulfilling a promise I made several months ago, I will now attempt to justify the Baader Meinhof group, and why left-wing terrorists are like completely better than right-wing terrorists.

Exhibit A: members of Baader Meinhof

Aren't they like, so cool? Man, they are THIS cool.

In contrast, Exhibit B: some right-wing terrorists 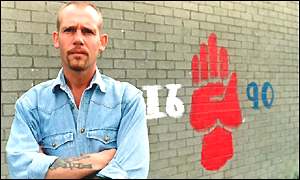 Look, when even the Gallic flair of the Organisation de l'armée secrète can't save you, you know that you're in trouble. They are simply rubbish, and not at all stylish.

The sad flaw with my wonderful theory is that, even before I spent a soul-crushingly large amount of time on a long essay on the subject of the Baader Meinhof group last year, I had come to the conclusion that the membership of the group could be divided into two camps: those that were stupid, and those that were utter shits. Some members fell into both camps.

Baader, for instance, was a petty crook, car-thief, possible rapist, and all-round shit. He was also, in the balance of things, thick as two extremely short planks. Meinhof cuts a more sympathetic picture, and despite being a presumably intelligent journalist and journal editor, was just plain stupid.

But man, they looked so COOL (sad smiley faces play out into the distance :( :( etc). It's a pity they were so fucking a) useless, b) stupid and c) morally repugnant.