A noble pastime. Categorising women's faults, but we have to do it for the sake of art. Allow The Rothelite and Jack Meridan Housen to take you on a joyride of sweeping sexist generalisations.

Having to explain films, especially at the most innapropriate times

They can't understand why explosions are cool.

Not acknowledging/being aware of drinking limits.

When they say they have no money but buy two or three pairs of jeans in the 1% off sale.

Taking too much time getting ready.

They hate all men until they see one they like.

Bitchiness about other women.

Time of the month is the excuse for everything.

Women want "it" just as much as men and have more chance of getting "it" whenever they want. But would never care to admit it.

Can't win with compliments. If effort is made with hair and nothing is said you are an ignorant bastard. When you do say something about hair on a normal day you get "oh no it looks bad".

Talking about the good things about their ex's.

Getting worried about small issues and expecting you to be as anxious.

When they assume you can't understand anything they're going through just because you haven't got ovaries.

When they say that we should know what's wrong with them, and what to do, even though the rest of the time they say we can never understand.

Pregnancy is only their problem. Obviously its a world of difference for the women, but the assumption is made that the guy will make it not his business.

As a societal norm, men are expecting to make the first move in da club/bar whereas women just wait for a look and a drink. Lazy.

Saying that something didn't mean anything, when it was fair to assume it did mean something.

If a blokes in a mood he's an idiot, but if the woman is then the man has to adapt.

A man can move on from an argument after an hour, a woman still hasn't moved on after a week.

Women don't like to be judged on their appearance but will use their breasts and appearance to get what they want.

Think men are less sensitive when we're clearly not.

Girls aren't expected to make an effort in bed, its up to the lad to perform. Its like an audition with the guarantee that the women will report back.

Assume no man can be trusted, but all women can.

Every woman is seen as a deep and meaningful person, whereas men are always put into stereotypes

Get in a mood and don't say anything to us leaving us to wonder if we are the problem. How intuitive can we be? This situation generally leads to thoughts from the woman that the man doesn't understand her or care for her. If you say the problem we will try to help. However this leads to us being accused of prying into a subject where we are not welcome. Can't it just be the case that we care enough to try and help whatever the situation? Apparently not. 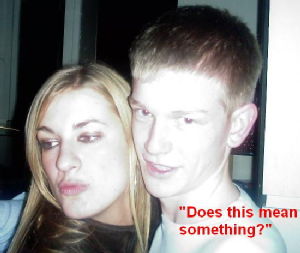 This blog entry has been soundtracked by David Bowie

After listing the faults of both genders together, The "film group" began to seriously consider the live part of our multi-form finale. We sat around and decided that the argument should build up from the jokey ones into the "deadly serious" category. We had trouble carrying this out for some reason and the session flew by and left us with a lose plan of what we were going to do. We felt a bit sour and knew that the next week was going to be a big one. Like this week was just waiting for the next. The next day me and Jack did a complete categorisation of women's faults which would provide a good outline for how the argument, or at least the male (correct) side.

I'm sure I've already wrote this stuff and it's disappeared, but here I go again.

The second half our filming took place in the studio. We decided on a minimal approach to set etc. We stuck to the original idea of having a person sat in a chair infront of a camera and that the person would keep changing every now and again. There was the tidy addition of having someone of the opposite gender stood behind them against the wall which was the lit from below to good affect. This way both genders were always present however the focus switches constantly so the viewer is unable to sympathise with one and always think of the other. The actual filming was textbook but almost too clinical. I can understand blowing up a life size bridge having to be done in one take, but saying one line can surely be messed around with from time to time. But its the same problem as last time were you feel like jackass if you say do it again but liek this. Who has the right? But fairplay to all actors we got good stuff I just felt like the process wasn't liquid enough. ACTION! CUT! NEXT! ACTION! CUT! NEXT! Liquid.

Perhaps my favourite thing about these parts its that even though there is another person stood behind the person in the foreground, the person in the background never says anything, except once! Sophie says "no" to something Owen says, so the only word we get from the guys in the back is in opposition to the front, enough said. It's war.